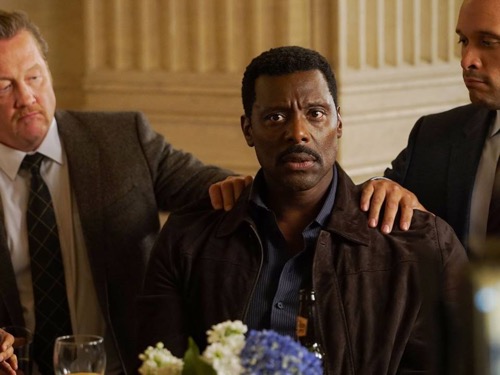 Tonight on NBC Chicago Fire returns with an all new Tuesday, December 1, season 4 episode 8 called, “When Tortoises Fly” and we have your weekly recap below. On tonight’s episode, Boden (Eamonn Walker) believes Maddox (Mark Hengst) is behind Serena’s (Ilfenesh Hadera) accusations.

On the last episode, Boden suspected his neighbor was setting him up; Severide, who was still on probation, received a surprise visit from his father and also learned something about Patterson that could have been game changer; and romance blossomed at a fire department gala. Did you watch the episode? If you missed it we have a full and detailed recap, right here for you.

On tonight’s episode as per the NBC synopsis, “Boden believes Maddox is behind Serena’s accusations; Severide reaches out to Jamie, who’s Maddox’s lawyer, in an attempt to help; and Patterson questions whether Boden can remain chief. In other events, Brett and Chili suspect that a man passed out in a garden is connected to a previous call; and Otis has problems with his social calendar.”

Tonight’s season 4 episode 8 looks like it is going to be great and you won’t want to miss it, so be sure to tune in for our live coverage of NBC’s Chicago Fire.

Chief Boden was accused of being paranoid last week and yet it seems he has every reason to suspect that someone is setting him in order to destroy his good name.

On tonight’ episode of “Chicago Fire”, Serena Holmes returned to her supposed air bnb home because she said she needed to get the rest of her stuff. However neither Donna or her husband wanted to let such an opportunity. And they wanted to speak with her.

So Donna told Boden to stay inside while she dealt with Serena and then she confronted the other woman right there on the street. And Serena didn’t give her what she wanted. She stuck to her ludicrous story about Boden beating her up and then drove off with a friend when Dona began to make a scene for everyone outside to see.

And although the situation was ugly, Boden had hoped that would be the last time he had to see Serena. But as it turns out he and his wife ended up being the last people that saw Serena on the night she disappeared because no one else had seen the friend she had driven away with. So the case that Detective Wheeler had was then upgraded from a mere assault to a possible murder.

A charge that would do more to ruin Boden’s name than anything Serena could have go on to say on the stand. Therefore the State’s Attorney had to send someone from their office down to 51 just to talk to Boden. Boden had been their best at getting Roger Maddox locked up with his testimony and thing with Serena was slowly devaluing their witness’s once pristine career.

So Boden made a promise to them that everything will be cleared up but his talk with the Assistant State’s Attorney did give him some ideas about who would want to destroy him. And that’s why, following his little chat, Boden called a conference of sorts. He called in Dawson, Casey, Severide and Patterson and he told them about his suspicions. And in return they told him they could see what they could do.

Dawson spoke with her brother and Severide finally paid Jamie a visit. Though Jamie told Severide that while she was glad to see him, she couldn’t help. And ultimately Antonio had to speak with Boden about the other man’s behavior.

For Boden didn’t rest on his laurels. He got to be so frustrated that he went to Maddox’s office and told Maddox that he shouldn’t have messed with his family.

Apparently Boden’s breaking point had begun when Donna’s mommy and me classes were cancelled because people had begun to suspect her husband was guilty. So Boden couldn’t abide by the fact his wife was getting shunned and that’s why he threatened Maddoz. However things only got worse for him because he found out that Patterson wasn’t really being a friend but actually an adversary.

Patterson had said he would calm down Riddle yet the truth was he was positioning himself to take his Boden’s spot one day. And given the chance, Patterson would betray anyone to get ahead.

Though Patterson had to still work on his leadership skills. He had first told Cruz that it would be ok if his young friend Freddie came by the station and then out of nowhere he just started talking about guidelines. Like how Freddie could only come in if Cruz was also there and that he couldn’t spend too much time at the station.

And speaking of the station, the guys had found a pet tortoise in an abandoned RV yet Chili and Brett had found out the owner had ditched his vehicle after going into diabetic shock. So while the owner was currently being hospitalized at Chicago Med, his ex-wife and son came by to collect Donatello. Donatello was clearly named by the young boy because of Teenage Mutant Ninja Turtles but funnily the guys at the station had given the tortoise another ninja name of Leonardo.

And once you name something, it is hard to let it go. But they did and the little boy had been happy to be reunited with his pet.

Though later, when the guys were all getting drinks, they were in for a rude surprise when Wheeler showed up and arrested the Chief right there in Molly’s.