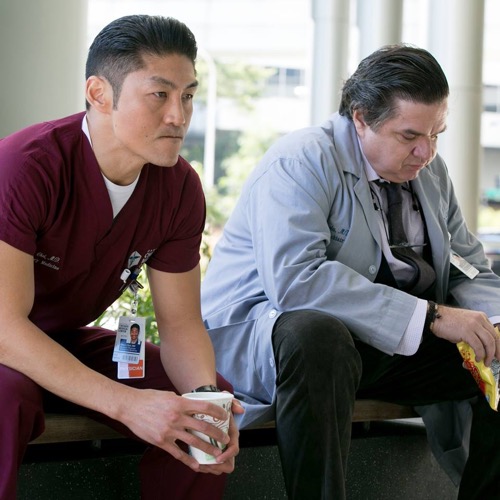 Tonight on NBC their new medical drama Chicago Med returns with an all new Tuesday December 1, season 1 episode 3 called, “Fallback,” and we have your recap below. On tonight’s episode Dr. Rhodes (Colin Donnell) must confront his past when he treats a close family friend who’s been impaled by glass in a case that reunites him with his sister.

Chicago Med is a show about daily hospital chaos played by the courageous team of doctors who hold everything together in this “Chicago Fire” spin-off.

On the last episode, Dr. Choi treated a teen mother who abandoned her newborn baby in an alley, as the staffers had to make difficult decisions about the teen’s future. Also, a hypochondriac with chest pains was treated, as is a patient suffering from possible dementia. Did you watch the last episode? If you missed it, we have a full and detailed recap right here for you.

On tonight’s episode as per the NBC synopsis, “Dr. Rhodes must confront his past when he treats a close family friend who’s been impaled by glass in a case that reunites him with his sister. Meanwhile, a musician must decide to undergo surgery that will save her life but could destroy her hearing.”

Tonight’s season 1 episode 3 is going to be exciting. We’ll be blogging it right here for you. In the meantime hit up the comments section and tell us your thoughts on this new show and enjoy a sneak peek of tonight’s episode below for your enjoyment!

An old family friend of Connor’s was brought in after he become impaled by a light chandelier. And although Connor wasn’t supposed to be on his case, in fact it had been originally Will’s case, he pushed his way on in order to be able to do something. Even if it wasn’t much.

Russell had apparently been someone close to Connor, before he had left Chicago that is, and so it had been important to Connor to be there to see Russell through. And he did. He saw Russell off to surgery and it looked like the other man was going to need extended care in the aftermath. So Russell ended up approaching his father and sister.

Everyone had known from day one that Connor had come from money but it seems Connor was richer than everyone thought. Connor Rhodes was part of the Rhodes family that ran the Rhodes Department store. So his father and sister were naturally Rhodes as well.

Only his father turned out to be pretty cheap. The elder Mr. Rhodes didn’t want to have to pay for Russell’s case even though Russell had gotten injured because of Claire Rhodes. After all it was her idea to get a new age chandelier that she hoped would upset her father and when the chandelier began to fall – Russell had pushed Claire out of the way thereby taking the full brunt of the impact.

Anyways, not only did Cornelius not want to pay for an employee’s extended care but he also didn’t want his son on Russell’s case. So he later spoke with Sharon and had demanded that Connor be removed. And when she didn’t fall in line, he went to her boss and tried to make her comply.

Though, fortunately, Sharon wasn’t intimated and Connor was allowed to carry in doing his job. And part of that was filling his father and sister about their next step in care. He and Dr. Toni Zanetti had taken internal images and they realized they needed to go through Russell’s collarbone to stop the inner bleeding.

Meanwhile Will who had a reason to laugh about Connor’s situation with his father, did so for a good minute but was no longer laughing once it came to his own patient’s care. A young woman by the name of Dylan was currently doing her masters at the conservatory when she hit her head after a fall. And sadly it had been Will’s job to inform her that she had tumors. Tumors that were pressing down on her neuros and that needed to be treated.

Only, there was a side-effect to the surgery. One on hand she would get better and she wouldn’t be suffering from falls, yet on the other the removal of the tumors would drastically affect her hearing therefore putting an end to her career before it had even begun. So Dylan had taken what her doctor to be the end.

And Nat had informed the young woman that she could still be able to play later on. She said music wasn’t all about hearing, it was also about feeling the vibrations whenever she played her violin. So there was still a way for Dylan to continue playing. All she had to do was remember and simply take the leap of faith. Which she did.

Thus Nat helped Will in treating his patient and by working together to help Dylan – the two made up from their little fight. And Nat had even uttered the words “ you’re forgiven” after she found out Will had sent over a package that included foods she’s been craving lately.

And therefore Nat’s day turned around. Earlier she had stopped by a patient’s room after she heard he was a ranger in the military. Like her husband. And so she wanted to know if the man might have known or met her husband.

But he hadn’t. Captain Trevor Jackson was merely in town to visit his in-laws and he had to come to the hospital following a fender bender.

Although Ethan ended up having some rather unfortunate news for the other man. Ethan had ran some tests on his patient and initially it looked like Trevor had been suffering from diabetes. So Trevor asked his doctor to run some more tests because diabetes would force the military into keeping him stateside.

And, well, Ethan found out his patient was right. Trevor didn’t have diabetes but he did have a wife that was poisoning him in order to stop his deployment.

Lauren tried to say she did what she did out of love though her actions were pretty hard to understand. So she was given two options. She could either turn herself in or have the hospital call the police on her. And she chose to voluntarily surrender.

Yet the oddest thing happened right before she did. Her husband decided to forgive her and also stand by his wife while she went down to the police department. So that’s kind of a happy conclusion.

And luckily Russell made through his surgery just fine. So the only person that seemed to be disappointed in Connor’s actual skill was his own father. A man that Connor is nothing alike.

But Reese, the new girl, was given a lesson on tonight’s episode of “Chicago Med”. She was told that if she wanted to be a doctor then she had to get over a yipps that was caused by an attendee barking at her previously. So Maggie ended up helping Reese find her way again.