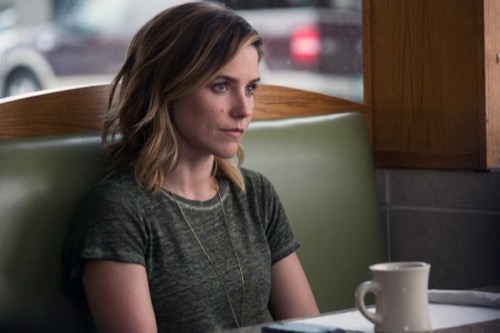 Tonight on NBC their riveting police drama Chicago PD continues with an all new Wednesday October 14, season 3 episode 3 called, “Actual Physical Violence” and we have your weekly recap below. On tonight’s episode, a man whose daughter is missing takes a member of the team hostage.

On the last episode, the team investigated the death of an 8-year-old boy. In other events, Burgess told Ruzek about Roman’s odd behavior; and Bunny derailed Voight’s career. Did you watch the last episode? If you missed it, we have a full and detailed recap right here for you.

On tonight’s episode as per the NBC synopsis, “a man whose daughter is missing takes a member of the team hostage. In other events, Voight learns that Bunny has made new accusations regarding an old case; and Antonio is shocked by a secret that Olinksy has been keeping.”

Tonight’s episode of Chicago PD kicks off with Lindsay out to lunch with a counselor – Hank forced her to meet up with him and discuss what caused her to derail and start partying, it is one of the conditions she had to meet in order to get her job back. Lindsay tells him that this whole meeting is “not for her,” and then she storms off and says that she has a case. She rushes to Hank’s office, he is waiting for her with the Commander. Lindsay’s mom Bunny turned Hank in to the cops and says that she has proof that he killed James Beckett many years ago in cold blood. The Commander tells Hank to deal with it before it makes it to his desk. Lindsay promises them that she will talk to her mother.

Meanwhile, there is a situation downstairs in the lobby. There are three different people trying to file complaints at the front desk. Trudy is trying to deal with them all at once. One man is ranting that his 18 year old daughter, “Sarah Fraasier” has been missing for 3 months. Trudy brushes him to the side, and then he freaks out because no one is paying attention to him and he grabs Mouse and takes him hostage and puts a gun to his head. The crazy man shouts that now Trudy has no choice but to listen to him – she draws her gun on him and everyone in the lobby hits the floor.

Hank comes downstairs and tries to reason with the gunman – he refuses to release his hostage until they search for his daughter. He throws Hank a bag and says that he is from Iowa, but someone used his daughter’s credit card in Chicago last week. Meanwhile, Linsay is at the bar – she shouts at her mom to drop the James Beckett thing. Bunny argues that Hank put an innocent man away in prison and she doesn’t want to live with the lies anymore.

Hank gets his team on the case ASAP, they rush to the store where Sarah’s stolen credit card was used to buy five televisions. They learn that the man that bought the TV’s was named Oscar, Olinsky and Atwater pay him a visit. They learn that he sotle the credit card from a purse out of a car a week ago. They rush to the car and find it parked in front of a building. The cops rush the building with their guns drawn when they realize that they are being watched on a surveillance camera. The house is empty – they head down to the basement, they find the surveillance equipment computer monitors. There’s a vault door, on the other side are cages with young girls in them. The girls are alive, they beg the cops not to to hurt them.

Meanwhile back at the precinct, Frasier still has Mouse locked in a room with him. Mouse is trying to make conversation with him and learns that he was in the marines and did tours in Baghdad. Frasier confesses that he was gone basically from the time that Sarah was born. Mouse reassures him that his daughter is in good hands – Hank will find her.

The captured girls are rushed to the hospitals, they have all been tortured and raped – and they are so doped up they don’t even know their own names. Lindsay heads in to one of the girls’ rooms to try and get a statement from her, or something that can help them find the guy. The girl says that his name was Trevor and she met him on Facebook. He sent her a bus ticket and she came to Chicago to be with him, he was much older than her – but he was handsome. The girl cries that Trevor picked her up at the bus stop and then took her out to dinner, and then he took her back ot his house and roofied her and raped her, then locked her up. Lindsay shows her a picture of Frasier’s daughter – she recognizes her and says that her name is Sarah.

Lindsay takes the girl back to the precinct to talk to Sarah’s dad. The girl is able to talk Sarah’s dad down and proves that she met his daughter by saying that Sarah used to talk about Blue Lake. The girl cries that the men couldn’t “break Sarah” and she wouldn’t do what they wanted. While the girl is talking, Mouse is able to get away from Frasier and takes his gun from him. The SWAT team cuffs Frasier and takes him away.

Ruzek is able to find Trevor’s online account, they hack his messages and learn that he is picking up another girl named Lacy at the bus station. They rush to the bus station, and they watch Lacy get off the bus and meet Trevor. Lindsay grabs the girl, and then Olinsky and Jay arrest Trevor. He swears he has no idea where Sarah Frasier is – they cuff him and bring him in.

Back at the police station Hank gets a few minutes alone with Trevor, it doesn’t take him long to beat a name out of him – Steve Orick. Orick is supposedly operating a brothel in RIdgeport. While they are getting ready to gear up and head to the house – a state’s attorney arrives at the station and takes Hank aside. He warns him that James Beckett is getting released from prison, Hank argues that they have to retry him – the attorney says that is not an option and he should have thought about that before he gave a false statement. It is all Bunny’s fault, they used her testimony to get James Beckett off the hook.

Hank and his guys arrive at the brothel – they find a girl hiding on the roof in her underwear, Olrick is shot and killed. The girl explains that he was moving them to another house and Sarah took his gun and shot him and then ran off. Lindsay gets a report that a teen girl in distress just boarded the el train with a hand gun. Lindsay, Jay, and the rest of the team rush to the subway to try and find Sarah. She is sitting on a train with blood on her face, holding the gun, she is staring off in to space and looks like she is in shock.

They clear the train station and Lindsay gets on the train with Sarah and tries to get her to hand over the gun. Lindsay reassures Sarah that Trevor is in jail and he can’t hurt her any more. Sarah cries that she can’t live with all of this. Lindsay tells Jay to call Voight, she wants him to bring Sarah’s dad to the bus station before she tries to commit suicide. Sarah puts the gun up to her neck and gets ready to pull the trigger – Voight arrives with her father just in time. Frasier runs in to the bus and Sarah drops the gun and starts sobbing. Afterwards, Mouse and Hank write up the report on Frasier – and they both say that Frasier’s gun wasn’t loaded, so he is only charged with wreckless endangerment.

Antonio is at the gym, late at night, and Alvin’s daughter shows up. She says that her dad wanted her to come in for training – Antonio is obviously surprised and had no idea that Al had a daughter, but he agrees to train with her. Meanwhile, Olinsky goes home and sits down with his wife and daughter – he tells them the truth, that he has a 15 year old daughter and he just found out about her. His wife is furious, she tells him to get out and his daughter Lexi starts crying.

Lindsay heads to the bar and meets up with her counselor – she finally opens up to him and starts tell him about her mom Bunny. He asks where her dad is, Lindsay says that she has no idea, he has been in and out of prison. Lindsay says that she doesn’t want to talk about her problems, she just wanted to apologize for what happened earlier. That night James Beckett is released from prison, he makes a public statement on the news and says that he is a born again Christian.