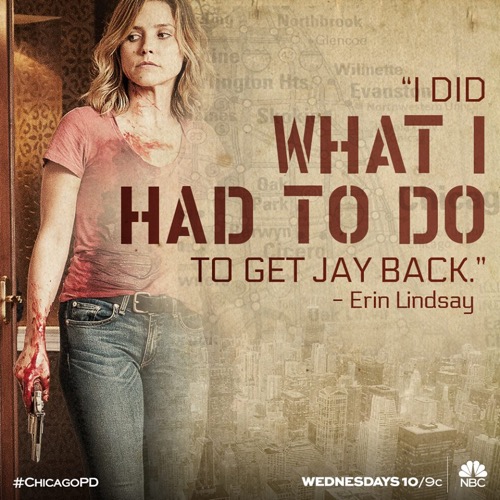 Tonight on NBC their riveting police drama Chicago PD continues with an all new Wednesday October 7, season 3 episode 2 called, “Natural Born Storyteller” and we have your weekly recap below. On tonight’s episode, the team investigates the death of an 8-year-old boy.

On the last episode, in the Season 3 premiere, a detective was abducted by a heroin kingpin; Lindsay’s downward spiral continued; Olinsky confides in Platt about a secret from his past; and Roman shared his worried with Burgess about her impending marriage to Ruzek. Did you watch the last episode? If you missed it, we have a full and detailed recap right here for you.

On tonight’s episode as per the NBC synopsis, “the team investigates the death of an 8-year-old boy. In other events, Burgess tells Ruzek about Roman’s odd behavior; and Bunny may derail Voight’s career.”

Burgess and Roman were in pursuit of suspect involved in recent gang activity when they came across a scene no one had been prepared for. They found a little boy’s body inside of a refrigerator on tonight’s all new episode of “Chicago PD” and the death of a child is the one thing this team can’t deal with.

A child makes it personal. Plus Voight’s personal policy on the matter is whatever yields results so that doesn’t always mean the detectives are going to stay within the lines on this one. Though, for Antonio, he didn’t need anyone to clarify what he had to do. He just the saw the young boy and immediately it made him think of his own son. So he wants to find justice for Jeremy.

Jeremy Dolan was only eight years old when someone had apparently grabbed him. He was found covered in bruises and had three knife wounds to the stomach. But his murder appeared to have gone in for the overkill because someone also snapped Jeremy’s neck.

Now the Medical Examiner couldn’t’ determine if the child had been “abused” because of the condition of the body but the first person to look for in these cases is usually the closest sex offender. And what do you know? Darren Woodhull moved to the city from Utah but conveniently forgot to register as a sex offender.

Woodhull lives within walking distance from Jeremy’s home and according to parents Jeremy was last seen at Roger’s Park which also happens to be nearby. So Woodhull had the means and advantage. Yet he told Dawson and Lindsay that he had an alibi for when Jeremy went missing. And then left them to go check it out.

But it turns out that Woodhull had lied about his alibi. He hadn’t been in a meeting at the time and so the police organized a raid on his home.

Only they didn’t find Woodhull. They found Woodhull’s roommate who was another unregistered sex offender yet this roommate was carrying a gun. He said he needed it for protection. Just before the police arrived, a couple of guys came by and they dragged Woodhull out of the house.

And it didn’t take a lot of guessing to figure who those guys were. Jeremy’s father seemed like he wanted the first shot at his son’s killer and, like he said, his neighborhood was close-nit. They protected their own and none of those same neighbors wanted to admit who had dragged Woodhull out of his house. So Voight was forced to make an appeal to Jeremy’s mother.

She didn’t want to say anything against her husband, but in the end she had to let the cops do their job. So she told them where they could find her husband and the police stopped him and a friend from beating Woodhull to death.

Apparently, while they were doing that, someone else grabbed another boy. Meaning Woodhull was not the man kidnapping and murdering children. He was just conveniently blamed by someone who knew they could get away with a crime as long as everyone focused on Woodhull.

Because everything really did point to Woodhull. Like the fact Jeremy’s blood was found in the trunk of his car. Yet Darren didn’t have access to his trunk much less his car for the past couple of days. He had put in the shop to it get fixed and it was the mechanic Hollister that had access to it when Jeremy died.

Earlier, when the detectives took a look at the car, Hollister began talking to them and he told them that he always felt something was off with Woodhull. Thus he wasn’t surprised that the other man turned out to be a pervert.

But once the car revelation came out, it was Hollister that had done a runner and he had taken a child with him. So what the police needed to know was why. Why was he targeting children and why was the body of Ray Malone found in his shed?

And sadly Ray proved to be the key to everything. Almost twenty years ago Ray and couple of his friends were playing around with one of their dad’s guns when the weapon went off. They accidentally shot Hollister’s son and, because they were scared of Hollister, they never came forward about what they did. They just put the little boy’s body under a house and the kid slowly bled out in the night.

After that, Hollister’s wife left him and Hollister began drinking. So Hollister never recovered from the loss of his son and Ray simply wanted to make amends. Ray was dying and so he told Hollister what he and his friends did. And Hollister killed him for it.

Then proceeded to kidnap the children of the men that had played a part in his own son’s death. But with an Amber Alert out on him – he didn’t make it far. And Antonio was thankfully able to talk the other man to let the child go.

Yet Hollister didn’t want to spend the rest of his life in jail. So his last act was to kill himself now that the people that hurt him got a taste of what he’s been dealing with for the last eighteen years.

And speaking of vengeance, Bunny didn’t like being dismissed by her daughter. She felt Voight was keeping them apart because he wanted Lindsey all to himself. So she went down to police headquarters with evidence against Voight for witness tampering.