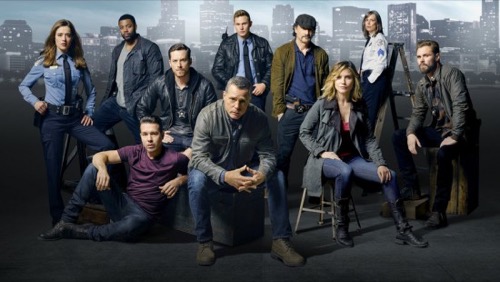 Tonight on NBC their riveting police drama Chicago PD continues with an all new Wednesday September 30, season 3 premiere called, “Life Is Fluid” and we have your weekly recap below. On tonight’s episode, in the Season 3 premiere, a detective is abducted by a heroin kingpin; Lindsay’s (Sophia Bush) downward spiral continues

On the last episode, retired Commander Perry (guest star Robert Ray Wisdom) enlists Voight (Jason Beghe) and the team to help extract his cop nephew from a unit of corrupt officers who were robbing drug dealers. When things went bad Voight must take down a younger, more violent version of himself. Meanwhile, Lindsay (Sophia Bush) struggled to stay clean. At the same time a woman from Olinsky’s (Elias Koteas) past reached out to him. Also starring Jon Seda, Jesse Lee Soffer, Patrick Flueger, Marina Squerciati, LaRoyce Hawkins, Amy Morton and Brian Geraghty. Did you watch the last episode? If you missed it, we have a full and detailed recap right here for you.

On tonight’s episode as per the NBC synopsis, “in the Season 3 premiere, a detective is abducted by a heroin kingpin; Lindsay’s downward spiral continues; Olinsky confides in Platt about a secret from his past; and Roman shares his worries with Burgess about her impending marriage to Ruzek.”

Tonight’s season premiere of Chicago PD kicks off with Dawson racing upstairs to the roof of a building, a woman is about to jump. She is crying that her boyfriend Benji is cheating on her, she is going to commit suicide. Dawson is able to talk her down, and promises that they will take down Benji. Meanwhile, Voight and his team are “blacking out” and preparing to raid Benji’s house. They arrive and find him sleeping upstairs. He wakes up and tries to pull a gun from under his pillow – but they tackle him and arrest him. Another guy comes out of the bathroom in his underwear and they arrest him too. Erin is at a club and pounding drinks, Jay is blowing up her phone and she keeps sending his calls to voicemail.

Voight brings BEnji in for questioning, he tells him that they aren’t after him – they are after his brother Derek because he is a “real gangster.” Meanwhile, Alvin and Ruzek are questioning BEnji’s boyfriend Aaron – he insists that they are “just friends.” Alvin tells him that he has “no need to be ashamed of who he is.” In the other room, Voight is cutting a deal with Benji. He agrees that if he rolls over on Derek – he will let Benji and Aaron walk.

Erin comes out of the club and it is daylight, Jay is waiting for her. He tells her that Voight put her on two weeks furlow and that runs out tomorrow. He tells Erin he isn’t leaving until she looks him in the eye and tells him that she isn’t returning to the precinct. Erin refuses to answer, and tells him that if he is done talking – she has to go.

Alvin arrives at work the next morning, Platt tells him that a woman named Michelle keeps calling him nonstop from a juvenile detention center. He admits that Michelle is his daughter, he slept with her mom years ago when he was under cover. Michelle’s mom is about to go to prison for 4 years – and Alvin doesn’t know what to do. Platt promises that he will take care of it.

Burgess and Roman arrive for duty – Platt stops Burgess and wants to know if she set a wedding date. She announces that she is going to be her wedding planner, and gives her a scrapbook that is probably older than Burgess and has pictures of wedding dresses from Woolworth’s. Meanwhile, in the locker room Ruzek corners Atwater and tells him that he is going to be the best man in his wedding.

Voight and his men are scrambling to try and track down Derek and Jay. He is questioning Benji’s girlfriend when a little boy arrives at the station – he has a package for Voight. It contains a burner phone and a disc that has a video of Derek torturing Jay. The phone rings, Derek tells Voight that he wants a list of all of the criminal informants that wok for Chicago PD, he wants it tomorrow morning and he wants a female officer to drop it off in exchange for Jay. Alvin slips away and calls Erin – he tells her that Jay has been kidnapped.

Voight pays Eddie a visit in prison, he says that he owes him – and he needs any information he has on Derek and his team and where they might be holding Jay. He tells Voight that he will ask around and see what he can dig up. Back at the precinct, Hank’s team is putting together fake criminal informants’ files to give to Derek. Erin shows up and announces that she is going to be the female officer that takes the files to Derek in exchange for Jay. Hank tells her it’s not an option – she begs him to let her make the drop and “make this right.” He gives Erin her badge back and says that it is “just for today,” and she is not officially reinstated.

Erin gets suited up and heads to the drop off point with the fake files. Two men roll up in an SUV, they ask Erin for the files. Erin asks where Jay is – they pull a gun on Erin and tell her to hand over the files, after they verify them they will give them Jay. Erin climbs in the car with them, and the files – Hank tells the team to “let her go.”

Eddie calls Voight, he tells him that there is a guy named Tyrese Chase in prison that works for Derek, they check Tyrell’s visitor logs and notice one of the guys visiting him is on Derek’s team. They run a background check on him and look up the properties in his name. They find a mansion listed for over $2 Million and they prepare to move out – they believe that is where Derek is holding Jay and Erin.

Erin arrives at Derek’s house – they hand over Jay, and he is brutally beaten. They won’t let Erin and Jay leave until they check the files. It doesn’t take long for them to realize that they are fakes. Derek orders his men to kill them both – Jay first and then Erin. Voight’s team is racing to the house, in the meantime – Erin and Jay and fighting off Derek and his men. Erin manages to take down the two guys with Jay’s help and then she shoots and kills Derek. Voight and his men show up in time to see Erin stumbling out of the room covered in blood. Jay is rushed to the ambulance to be patched up. Erin stops to check on him, and he tells her that he is glad that it was her that they sent in for him.

Alvin heads to the juveline detention center, Michelle comes out and he introduces himself. Alvin tells her that he has lined up a place for her. Michelle informs him that she is “good with all that,” but she needs $80. He gives her the $40 in her wallet, and a guy arrives in a black car and picks her up. She thanks Alvin for getting her out and then hops in the car and drives off.

Voight is in his office, Erin stops by and he has a statement for her to sign saying that she shot Derek in self-defense. She tells Hank that she wants to hang on to her badge. He tells her there are conditions, she has to live with him and take weekly drug tests – and she has to sever all ties with her mother. Atwater and Ruzek head to the bars and have some drinks and cheers to Jay. Burgess is drinking with Roman, and he leaves the table. His bag falls on the floor – and a needle falls out. Burgess throws it back in Roman’s bag before anyone notices.