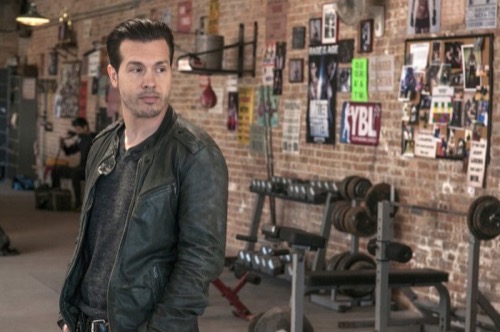 Tonight on NBC their riveting police drama Chicago PD continues with an all new Wednesday May 20, season 2 finale called, “Born Into Bad News” and we have your weekly recap below. On tonight’s episode, in the season 2 finale, Cdr. Perry (Robert Ray Wisdom) asks Voight (Jason Beghe) and the team to rescue his cop-nephew from a corrupt squad of officers that robs drug dealers. In other events, Lindsay struggles to maintain her sobriety; and a woman from Olinsky’s past contacts him.

On the last episode, when multiple people were shot inside an athletic club intelligence work to find and take down the shooters before there’s any more victims. When they discovered that all the targets were from the same law firm it’s apparent that it was a case of corporate revenge. Now they needed to find out what the motive for these killings. Atwater (LaRoyce Hawkins) was dealing with his new assignment, while doing so he played a key role in locating the shooters. Meanwhile Platt (Amy Morton) and Halstead (Jesse Lee Soffer) were trying to approach Lindsay (Sophia Bush) to see how she’s coping with a recent death. Also starring Jason Beghe, Jon Seda, Patrick Flueger, Elias Koteas, Marina Squerciati and Brian Geraghty. Markie Post and Samuel Hunt guest star. Did you watch the last episode? If you missed it, we have a full and detailed recap right here for you.

On tonight’s episode as per the NBC synopsis, “retired Commander Perry (guest star Robert Ray Wisdom) enlists Voight (Jason Beghe) and the team to help extract his cop nephew from a unit of corrupt officers who are robbing drug dealers. When things go bad Voight must take down a younger, more violent version of himself. Meanwhile, Lindsay (Sophia Bush) struggles to stay clean. At the same time a woman from Olinsky’s (Elias Koteas) past reaches out to him. Also starring Jon Seda, Jesse Lee Soffer, Patrick Flueger, Marina Squerciati, LaRoyce Hawkins, Amy Morton and Brian Geraghty.”

Lindsey has turned into a hot mess and no one can deny it on tonight’s episode. It almost seems like she personally let herself go and to be frank she’s close to flushing down her career as well. And for what? Grief. Everyone is still upset about Nadia but they at least remember to come in to work on time.

But, hey, she was close to Nadia so at first her unit cut her some slack. And that even went for Voight. For he, more than the others, ignored the warning signs. Though apparently they just hoped that with enough time she could pull herself together.

And unfortunately there came a point when they couldn’t afford to wait anymore. Lindsey was needed for an undercover sting so Voight pulled her aside to ask if he could depend on her. She said he could but did she mean it?

Old friend and retired Commander Perry had approached Voight for help. He said his nephew had gotten caught up with a group of dirty cops and that he wanted to safely extract the boy from it all. So Voight sent Lindsey in to catch these guys in the act.

And that’s what she did. She made it appear that she was dirty too and that Voight was still willing to take bribes but, despite her success, she also had do a mandatory drug test when it was all over. See, she had used her gun and it’s mandatory that she gets herself checked out afterwards. Thus when she told Voight he could depend on her – she actually lied.

Lindsey had drugs in her system.

And that means it doesn’t matter that she caught these out of town cops stealing from drug dealers or that one of them was going to shoot a kid. It’s not their deeds that’s going to be put under the microscope. It’s hers. And whatever she said was going to be dismissed.

So Lindsey then did something stupid. She tried to put off the inevitable and stall on taking her drug test. And sadly that allowed the officers she arrested to be freed while the court waited on her results. Though these guys are not people that should be free.

They found a way to attack Perry at the very opportunity they could and they nearly killed his nephew on top of it.

However the nephew had it coming because it looks like his uncle went to bat for him when he shouldn’t have. As it turns out Carter was dirty. Just as dirty as the same friends je risked ticking off by snitching on them.

So they set him up and they were also going to target Lindsey. After all she was the only other person that could potential send them to prison. But by time Voight had found out about their plans – Lindsey didn’t want to take his calls.

Before the imminent threat had been revealed, she and Voight got into a fight earlier when she explained her dilemma with the drug test. And though he promised to cover for her – he also expressed his disappointment. Voight said he couldn’t rely on another Bonny. Hence he told her to go straight home. To clean herself up.

And when she did that, she ended up running into a couple of guys that wanted to kill her. They had been waiting for her at her apartment and at the time Lindsey couldn’t answer phone because the guy Landon wanted to spend some time with her.

Luckily Atwater was in the nearby area. So he actually came to hers and Landon’s aid. And with the two guys they had in custody, everyone could finally wrap up the ongoing case and get justice for the late Commander.

But these things, even victories, come at price.

Atwater had been cleared by Internal Affairs so that in addition to what he did for Lindsey got him back upstairs with the unit. So good for him but not much for Burgess. And as for Lindsey, this ordeal was sadly not going to be the turning point in her life. Instead of getting help – she continued in her downward spiral with only her mother as her support.

And her mother isn’t good for her.

That old drunk loved having her daughter depressed and in need. Somehow that made Lindsey worthy in her eyes. So she didn’t want Lindsey to get better and with yet another excuse (like her near death experience) she made sure Lindsey always had enough to drink.

Oh and Olinsky is a dad. To her young woman by the way that he fathered while still married to his wife. So can’t wait to see how he explains that one!