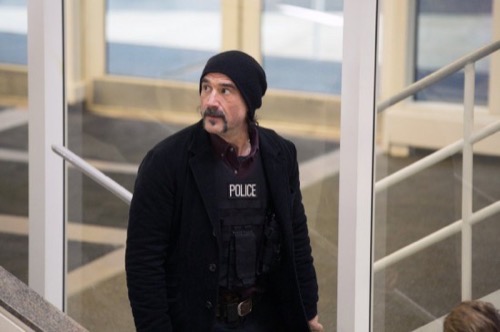 Tonight on NBC their riveting police drama Chicago PD continues with an all new Wednesday May 13, season 3 episode 23 called, “Push the Pain Away” and we have your weekly recap below. On tonight’s episode, a mass shooting at an athletic club is investigated; and Atwater, (LaRoyce Hawkins) who’s dealing with his new assignment, helps locate the suspected shooters. Platt (Amy Morton) and Halstead, (Jesse Lee Soffer) meanwhile, check in with Lindsay to see how she’s managing.

On the last episode, as District 21 was struggling to came to terms with the loss of one of the team they were forced to put their personal feelings aside when a café was bombed. The unit had several suspects and only one good eye-witness, who happened to be a minor. Halstead (Jesse Lee Soffer) pulled some strings to convince the mom to let him question Isabella (guest star Haley Seda) on what she saw. Atwater (LaRoyce Hawkins) found himself in hot water when he makes a crucial mistake. Thanks to the tech savvy Mouse (guest star Samuel Hunt) the team was able to gain important intel that could help solve the case. Meanwhile Voight (Jason Beghe) helped Platt (Amy Morton) when she came up against several roadblocks in an attempt to get a memorial stone for their fallen member. Did you watch the last episode? If you missed it, we have a full and detailed recap right here for you.

On tonight’s episode as per the NBC synopsis, “when multiple people are shot inside an athletic club intelligence work to find and take down the shooters before there’s any more victims. When they discover that all the targets were from the same law firm it’s apparent that it is a case of corporate revenge. Now they need to find out what the motive for these killings. Atwater (LaRoyce Hawkins) is dealing with his new assignment, while doing so he plays a key role in locating the shooters. Meanwhile Platt (Amy Morton) and Halstead (Jesse Lee Soffer) are trying to approach Lindsay (Sophia Bush) to see how she’s coping with a recent death. Also starring Jason Beghe, Jon Seda, Patrick Flueger, Elias Koteas, Marina Squerciati and Brian Geraghty. Markie Post and Samuel Hunt guest star.”

Tonight’s episode looks like it is going to be great and you won’t want to miss it, so be sure to tune in for our live coverage of NBC’s Chicago PD at 10:00 PM EST.

Burgess’s first day on the job did not go smoothly. First she had to deal with Platt and for some reason her former Desk Sergeant appeared to have an attitude with her. So technically she didn’t even make onto the right floor before her unit was called out to the scene of a shooting.

Four armed and masked men entered an athletics building and specifically targeted four lawyers that were all partners at the same firm.

But then something odd happened. Three out of the four shooter soon disappeared inside. And as for the fourth, he appeared to have wanted to be caught. So something wasn’t adding up and it just kept getting stranger by the minute.

The one man that stayed behind refused to identify himself. And that includes when he was “alone” with Voight. Thus he comes across as dedicated to his cause yet the police have no idea what he’s fighting for.

A fingerprint found at the scene showed that one of the shooters had been in Europe two days ago and had assassinated a high powered businessman. Eventually that man and the lawyers were proven to have been connected but the murders still weren’t making any sense. The businessman’s company, which dealt with chemicals, had been doing some kind of work in Indiana and the lawyers worked for the same firm that represented the company.

Lindsey even found out they took direct charge of Lancaster Chemicals’ account. Though that was about as much as she found when she was called in to give a report.

Apparently staying out all night in order to drink was not the best idea. And Voight covering for her isn’t helping. If anything it’s making Lindsey feel guilty and in need of lashing out.

So there’s a detective on the edge while the city is in the grips of a terrorist attack. Because that’s what the shootings have become. After a couple of officers caught the remaining three trying to make a run for it – the shooters ended up taking hostages.

Meaning the situation can only be resolved when they know what these people want.

Ransom demands can be made and a bus can be asked for but the hostages were a fall back plan. And the shooters’ original intent was to deliver a message. So Mouse did some digging and he was finally able to identify the one man they had in custody.

Their shooter was from Indiana and less than a year ago he buried his eight year old niece. And when Voight walked in unarmed to see the condition of the hostages – he provoked the shooters into answering some questions. Like their connection to the little girls.

And it seems they believe that Lancaster Chemicals had been dumping waste into their water supply.

In fact the whole town blames the company for killing one of their own and for making countless other children sick and after Voight got them riled enough – the CPD was able to swwop in and free the hostages. But a mistake was made. Not on Voight’s part but on Lindsey and Burgess’s.

One of the shooters had pretended to be a hostage and so he was freed before intelligence could realize their mistake.

Subsequently, it was revealed that the shooters were all part of the same family. Three were brothers and one was their nephew. So that explain why they had all been willing to go to such extents to expose Lancaster Chemicals. And why they let their nephew get away.

The man they killed overseas had betrayed the company and he was going to give them the evidence they needed to protect their town. Then things changed. And someone’s silence was bought for a couple of million dollars.

So the family grew desperate and they decided to create such a spectacle that no one could ignore it. Especially Lancaster Chemicals.

However the family wasn’t done. They wanted to do more than bring attention to their lives back home. They also wanted someone to pay. And it was that need for revenge that ruined their message.

One had been killed and two had been arrested but the last had been ordered to kill one more person. Someone who had signed off on the cover-up. And Lindsey, acting as an officer of the law, placed herself in the way in order to keep a young man from becoming a killer.

See Nick, the nephew, he hadn’t killed anyone. So Lindsey told him there was still a chance for him and in the end she convinced him to walk away from this situation alive.

Thus she helped him see the light but then she herself continued down a very dark path. For although Lindsey helped stop a murder – she couldn’t get over her supposed role in Nadia’s death. So she turned to drinking to help and when that didn’t work she proceeded to use men. And the drugs they could supply her.

But what can Voight do in order to keep her from self-destructing?