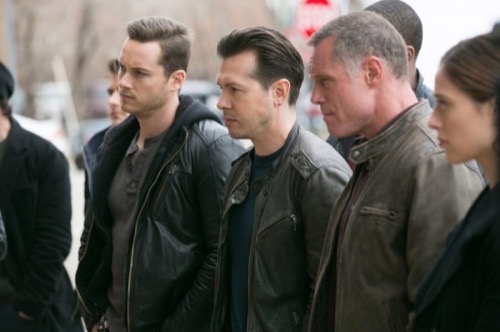 Tonight on NBC their riveting police drama Chicago PD continues with an all new Wednesday May 6, season 3 episode 22 called, “There’s My Girl” and we have your weekly recap below. On tonight’s episode, the investigation into the bombing of a trendy café hinges on a minor, who witnessed it; and a major blunder lands Atwater in hot water. In other events, Voight helps Platt in her attempt to get a memorial stone for the team’s fallen member.

On the last episode, continuation of Chicago Fire, “We Called Her Jelly Bean” episode. Benson (Mariska Hargitay) had traveled into Chicago to help Voight (Jason Beghe) and intelligence with a rape/murder case that was frighteningly similar to a case from New York a decade ago. She called in Fin (Ice-T) and Amaro (Danny Pino) to assist. The prime suspect, Yates (Dallas Roberts) was let go after rigorous questioning. He then requested a meeting with Lindsay (Sophia Bush) and he warned of unintended consequences from what intelligence was doing. Featuring Jon Seda, Jesse Lee Soffer, Patrick Flueger, Elias Koteas, Marina Squerciati, LaRoyce Hawkins, Amy Morton, Brian Geraghty, Eamonn Walker, Nick Gehlfuss, Stella Maeve and Samuel Hunt. Did you watch the last episode? If you missed it, we have a full and detailed recap right here for you.

On tonight’s episode as per the NBC synopsis, “as District 21 is struggling to come to terms with the loss of one of the team they are forced to put their personal feelings aside when a café is bombed. The unit has several suspects and only one good eye-witness, who happens to be a minor. Halstead (Jesse Lee Soffer) pulls some strings to convince the mom to let him question Isabella (guest star Haley Seda) on what she saw. Atwater (LaRoyce Hawkins) finds himself in hot water when he makes a crucial mistake. Thanks to the tech savvy Mouse (guest star Samuel Hunt) the team is able to gain important intel that could help solve the case. Meanwhile Voight (Jason Beghe) helps Platt (Amy Morton) when she comes up against several roadblocks in an attempt to get a memorial stone for their fallen member. Also starring Jon Seda, Sophia Bush, Patrick Flueger, Elias Koteas, Marina Squerciati and Brian Geraghty. Joe Minoso, Markie Post and Kevin J. O’Connor guest star.”

The squad room just isn’t the same without Nadia. And Lindsey is taking her friend’s absence the hardest out of all of them.

See, she was the one that had helped Nadia get clean. Lindsey found Nadia working the streets and she put her through rehabilitation. And then later when Nadia needed a place to stay or a job – Lindsey came thought. She offered her room in her apartment and she even got Nadia a job at the police station. So those two were more than passing acquaintances. They were friends, they were roommates, and for the most part they were each other’s family. Neither had much in the way of that and so their bond was one of a kind.

Yet there is a part of Lindsey that wonders if Nadia would have been better off if she hadn’t met her.

Nadia’s killer found her at the police station. And he targeted her in order to make a point. He wanted the world to know that he could do whatever he liked and that no one could stop him. However the NYPD (with the assistance of their Chicago brothers) did eventually put that man away.

Though that doesn’t really count in the way of closure. Lindsey is torn up and Platt is going overboard in planning Nadia’s funeral. Apparently the man that was supposed to create Nadia’s headstone fell through so Platt was freaking out and Roman had to step in to help.

Meanwhile Lindsey and the rest of Intelligence worked a bombing. A café had been hit by a crude bomb and the owner of the place believes the neighborhood thug was the one behind it. It seems that before his shop blew up and his wife got injured in the process, someone was shaking down the café owner. Yet times proved to be tough and the owner realized he couldn’t pay as much as before.

So he was threatened although not explicitly. He was merely told that he would be sorry if he remained late on his payments.

But when they questioned the local extortionist – he swore it wasn’t him. He stayed on in his neighborhood after the rich crowd moved and started gentrification. So why would make a rash decision that would affect the neighborhood.

Right now, he’s using the opportunity that was given to him. And so he’s milking a good deal by threatening the newcomers for money. In other words there’s no way he would portray the neighborhood as unsafe.

Not when it has kept him in style so far!

And later when Halstead found an eye-witness, she confirmed they had the wrong guy. Isabella claimed she saw a white guy bomb the café. Apparently the twelve year old was at first apprehensive about talking to cops because her mom had told there would be retribution. But after Halstead found her a good private school she could transfer – Isabella’s mother allowed her to talk.

The man she saw was not only white but he also had scars on his hand. So with her help, they found Carter. Carter is a recent parole and he’s been known to do things for money.

The detectives found a wad of cash at Carter’s place and that along with drugs that was found on the scene – told them everything they needed to know about their bomber.

Someone had hired him and because the man was in jail up until a few weeks ago – he jumped at the opportunity to fee his drug habit. But, sadly, Carter didn’t give them much. He refused to talk about who hired him and later he committed suicide using a soda can that had been left behind.

Atwater didn’t mean to leave the can behind but he did and now because of that he has to answer to internal affairs when they conduct an investigation into Carter’s death and he also got bumped down back to uniform “in the meantime”.

And as for who hired their bomber, Intelligence found out they were wrong when they suspected a local landlord wanted to drive his tenants out. He was clean but the café owner who just lost his wife – wasn’t. Mouse found out that the owner had legally changed his name a couple of years ago.

Before he was clean cut business owner, he has a wife that mysteriously died that he just so happens to have had a large insurance policy out on. So this guy had killed one wife and what’s to say he didn’t do it again when he found himself short on cash. And after a couple of minutes with Voight in a cell – the guy confessed to everything.

And later Voight used the same underhanded way to get Nadia her proper place at the memorial for fallen officers. Platt had tried to do that but she had run into red tape. So Voight stepped in and, despite the blackmail, he did a good thing for a friend.

Nadia will always be remembered now.

However Atwater is out. It seems he realized that being bumped back down to uniform was it for his career in intelligence. So he congratulated Burgess on her promotion because he didn’t want her to think that he blamed her for stepping into his old job.

And Lindsey, she chose to skip out on the memorial for Nadia and go have a couple of drinks with her mom – the walking disaster!