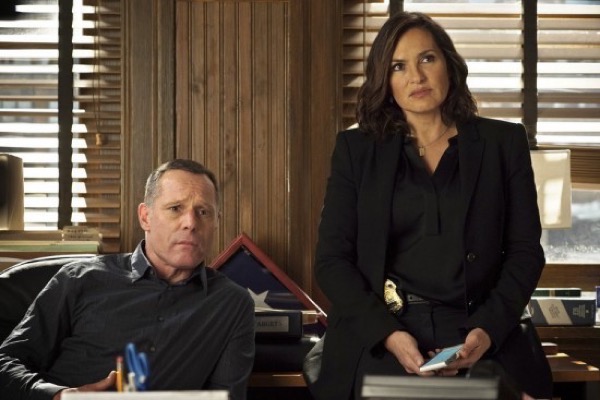 Tonight on NBC their riveting police drama Chicago PD continues with an all new Wednesday April 29, season 3 episode 21 called, “The Number of Rats” and we have your weekly recap below. On tonight’s episode, SVU’s Benson,  [Mariska Hargitay] Fin and Amaro [Danny Pino] help with the investigation of a rape-murder that’s similar to a decade-old case in New York; and, after he’s questioned, a suspect warns Lindsay that the investigation could have unintended consequences.

On the last episode, hen the father of one of the dead girls explained that he paid Dennis Lee (guest star Kelvin Han Yee) to have her brought to America, this hit home with Olinsky (Elias Koteas). Lee was one of the Chicago’s most wanted fugitives and escaped Olinsky once before. Intelligence wasn’t about to let Lee duped them again and Olinsky’s past files prove valuable in finding Lee’s whereabouts. Meanwhile, Sean Roman (Brian Geraghty) had an altercation with a fellow officer which lands him in a bit of trouble. At the same time Platt (Amy Morton) helps prepard Nadia (guest star Stella Maeve) to take her polygraph test after passing the CPD written exam. Also starring Jason Beghe, Jon Seda, Sophia Bush, Jesse Lee Soffer, Patrick Flueger, Marina Squerciati and LaRoyce Hawkins. Samuel Hunt, Alina Taber and Melissa Carlson guest star. Did you watch the last episode? If you missed it, we have a full and detailed recap right here for you.

On tonight’s episode as per the NBC synopsis, “Continuation of Chicago Fire, “We Called Her Jelly Bean” episode. Benson (Mariska Hargitay) has traveled into Chicago to help Voight (Jason Beghe) and intelligence with a rape/murder case that is frighteningly similar to a case from New York a decade ago. She calls in Fin (Ice-T) and Amaro (Danny Pino) to assist. The prime suspect, Yates (Dallas Roberts) is let go after rigorous questioning. He then requests a meeting with Lindsay (Sophia Bush) and he warns of unintended consequences from what intelligence is doing. Featuring Jon Seda, Jesse Lee Soffer, Patrick Flueger, Elias Koteas, Marina Squerciati, LaRoyce Hawkins, Amy Morton, Brian Geraghty, Eamonn Walker, Nick Gehlfuss, Stella Maeve and Samuel Hunt.”

According to Sgt. Olivia Benson, this latest case involving a Chicago nurse sounded eerily familiar to a string of cases that she herself had dealt with back in the day. See, there were three victims and all had the same MO. A man in medical scrubs would get a hold of these women and while he was in their custody they were then all assaulted and strangely had their nails painted.

But, sadly, that’s where the case came to the close. There were not one that saw this man’s face, there wasn’t DNA, and since 2004 their prep has been dormant. And yet now it looks like something has changed.

The perp is back and Victoria’s nails weren’t painted. And while Victoria was lucky enough to survive the initial assault, she ultimately succumbed to her injuries and died in the hospital.

According to Halstead’s brother, prior to the incident, Victoria was actually really nice. That was one of the things you just immediately knew about her. So she never had a problem with anyone at the hospital and seeing as she was a maternity nurse – most people didn’t have a reason to hold a grudge against her. Yet she was still attacked and the perp had tried to kill her by lighting her apartment on fire.

So in a few hours she had left, both Voight and Benson had to ride roughshod over common decency and grill their victim in her final moments.

And she didn’t have much to say. Before she died, Victoria told the police that she didn’t see the man’s face. She saw that he was wearing medical scrubs and she knew his white. Other than that though she mostly guessed at his height. Thus they know he could be or close to six feet.

Unfortunately, what little description Victoria gave wasn’t much but it could be used to hold against a doctor. Practically any doctor but in particular Jay Halstead’s brother Will. After all Will admitted to knowing Victoria and some digging showed that he once questioned by Detective Stabler in New York in connection to another victim. So Benson asked Voight for the go-ahead and he gave her permission to question Will.

The actual conversation began just fine but once Halstead realized what the detectives were doing with his brother – he quickly pulled Will out of there.

Another suspect was eventually mentioned thanks to more evidence coming up but Jay still felt a certain way about how his brother had been brought in. So it wasn’t until Will was cleared that Halstead allowed him to come back and give testimony. Because, apparently, Will knows the new suspect.

Dr. Greg Yates was once a profressor at Columbia University. In fact he was one Will’s teachers. And Will can recall seeing him at a party that one of the original victims had attended.

So Will can make a connection and he also said that Yates was simply one of those guys that always gave off a certain vibe.

He had students call him by his first name and later, when he got sloppy, he would rate the women around him. Including some of his students and one woman that died in 2004 three days after he saw her at a party. Thus the detectives felt they had the right guy. However they had to take him in by the book and so at first they let him go.

They needed more evidence to arrest him at the time and so Voight and his task were essentially stuck sitting on their hands. But then Yates reached out to Lindsey. He said he wanted to talk and later that’s exactly what they did.

They just talked.
And when the conversation was over (and Lindsey was safe), Yates drove away and the task force received a call about a young woman that had been set on fire in her own home. She was a brunette, young, and pretty. And now she’s dead.

So Lindsey was used as an alibi and while the team was searching for Yates – Yates snatched Nadia.