Chicago PD Recap – ‘What Puts You on That Ledge’: Season 2 Episode 16 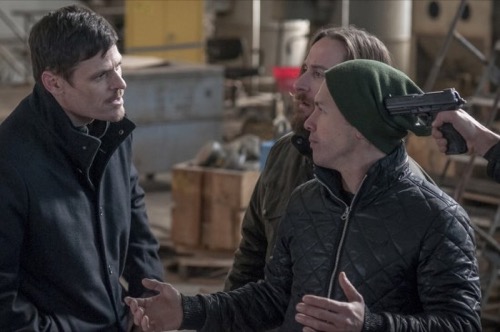 Tonight on NBC their riveting police drama Chicago PD continues with an all new Wednesday February 25, season 2 episode 16 called, “What Puts You on That Ledge,” and we have your weekly recap below. On tonight’s episode, Antonio [Jon Seda] goes undercover to infiltrate a dangerous robbery gang in the wake of an officer’s vanishing.

On the last episode, Burgess and Roman got trapped with no means to defend themselves or communicate for help when investigating a perilous smuggling operation. Meanwhile, a slow day found the Intelligence crew receiving taser certification. Did you watch the last episode? If you missed it, we have a full and detailed recap right here for you.

On tonight’s episode as per the NBC synopsis, “Antonio goes undercover to infiltrate a dangerous robbery gang in the wake of an officer’s vanishing. Meanwhile, Roman and Burgess face a squatter situation, so they reach out to a firefighter (Christian Stolte) for help.”

Rick Manning, a police officer in Narcotics, is missing on tonight’s all new episode of “Chicago PD” and the Commander has personally asked Voight and his team to help in the search. This officer it seems was part of a two year operation. So although Rick’s cover could have been blown and thus explain his absence – the police can’t risk exposing him themselves. Meaning any sort of investigation into his disappearance has to be carried out discreetly. And, luckily, one of Voight’s detectives is in the best potion to help them with this.

Apparently, Antonio had gone in undercover a few years ago and while he was pretending to be low-life he met someone that’s now part of the crew that Manning was last investigating. So all Antonio has to do is make contact with his old friend and see if Manning’s position is open. And after he’s establish this, he can probably find out what happened to his predecessor.

However things aren’t as clear cut as all that. Manning, it appears, might have been a dirty cop.

A stash of money was found at his home that he shared with his wife and son. Meanwhile Ruzek and Halstead found the apartment Manning was renting as part of his cover and his landlord admitted to last seeing Manning leaving with a girl he was obviously involved with. And there’s no way this mystery woman was Manning’s wife.

So Manning did more than just go in undercover. All the signs are pointing to him taking his new “identity” and running with it. No, there’s a chance he didn’t get very far. You see now there’s two options as to why Manning could have gone missing. One, he was discovered as a cop and was killed because of it. Or two, he tried to steal from the gang and they’re now holding some place trying to get information out of him.

And seeing as the situation was this murky, Antonio had to go through with his audition process. It seems he had to be auctioned before the gang officially took him on. So that meant Antonio had to help them rob a pharmaceutical company.

But there was on slight hitch in the audition. One of the guys on the crew went a little off script and had attempted to shoot a guard that was actually Olinsky undercover. So Antonio made sure to intervene yet that was a really close call. And afterwards, his “friend” spoke to him about getting out of the business.

Cooper had told Antonio that guys he’s been riding with him were sometimes just too much. And now all he wants is to merely get out of the business altogether. In fact he even suggested to Antonio that they could become roofers.

Antonio, though, couldn’t leave nor could he allow Cooper to leave. Not just yet anyways. So he asked Cooper about the guy that he used to work but who had seemingly vanished. And Cooper admitted to seeing Rick alive the day before. He explained the other guys weren’t going to kill Rick unless he gave them the location of their money.

Although, they seemed to have changed about that last part when they told Antonio he had one last test.

Antonio was brought to a warehouse and there he was told he had to kill Rick as his final test. But that’s something he couldn’t do. So he tried to stall for time and that in turn made the crew suspicious.

They had actually had their guns pointed on Antonio when backup arrived to save the officers. And in the process of doing that, though, they destroyed Antonio’s cover and his friendship with Cooper. Thankfully, Cooper was offered a deal afterwards in exchange for giving up information about all of the crew’s dealings but he only agreed to that if he didn’t have to speak to Antonio.

And as for Rick, he now has to answer a lot of questions and in the meantime his wife isn’t sticking by him. Instead she told Lindsey that she should never marry a cop. Just stick to someone normal.

Normal, however, can be just as overrated. Roman and Burgess were investigating a squatter and as it turns out the reason he didn’t want to leave another couple’s apartment was because he had stuffed his wife’s dead body in one of the walls.