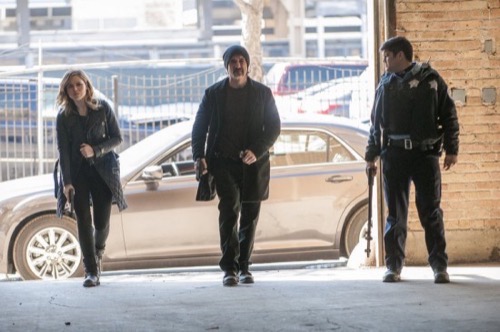 Tonight on NBC their riveting police drama Chicago PD continues with an all new Wednesday April 8, season 3 episode 20 called, “The Three Gs” and we have your weekly recap below. On tonight’s episode, the deaths of several teen girls in a Chinatown factory leads to a search for a human trafficker who eluded Olinsky [Elias Koteas] once before. In other events, Sean [Brian Geraghty] has an altercation with a fellow officer; and Platt [Amy Morton] helps Nadia [Stella Maeve] prepare for a polygraph test.

On the last episode, Intelligence responded to a drug robbery gone wrong and in their investigation it revealed that the first person Voight (Jason Beghe) ever gave his card to was linked to a double murder. Voight fought to keep her family safe. At the same time, we learned the real reason why Halstead’s (Jesse Lee Soffer) brother Will (guest star Nick Gehlfuss) came to Chicago. Meanwhile Desk Sgt. Platt (Amy Morton) took care of a young girl at district. Did you watch the last episode? If you missed it, we have a full and detailed recap right here for you.

On tonight’s episode as per the NBC synopsis, “when the father of one of the dead girls explains that he paid Dennis Lee (guest star Kelvin Han Yee) to have her brought to America, this hits home with Olinsky (Elias Koteas). Lee is one of the Chicago’s most wanted fugitives and escaped Olinsky once before. Intelligence isn’t about to let Lee dupe them again and Olinsky’s past files prove valuable in finding Lee’s whereabouts. Meanwhile, Sean Roman (Brian Geraghty) has an altercation with a fellow officer which lands him in a bit of trouble. At the same time Platt (Amy Morton) helps prepare Nadia (guest star Stella Maeve) to take her polygraph test after passing the CPD written exam. Also starring Jason Beghe, Jon Seda, Sophia Bush, Jesse Lee Soffer, Patrick Flueger, Marina Squerciati and LaRoyce Hawkins. Samuel Hunt, Alina Taber and Melissa Carlson guest star.”

Olinksy and Lindsay weren’t even supposed to be on that side of town but, because they had just had lunch with Olinksy’s daughter, they chose to take a call in the nearby neighborhood. Apparently, there was a reported pungent smell coming from one of the warehouses. So odds were it was always going to be a body.

Yet no one expected they would find a den of bodies. A group of women chained together had all perished and when the detectives chose to check around in case the culprit was nearby that eventually lead to a shoot-out that took down two innocent bystanders. One woman was shot in her leg and a child took a bullet to the chest.

Roman and Burgess were the first responders to the child and they immediately got her medical. Unfortunately, though, for Olinksy he was still at the scene when a distraught man came to the warehouse asking if his daughter was one of the victims. It seems he hired someone to bring her to this country. However after he had already paid thirty thousand dollars to a man by the name of Dennis Lee he soon was extorted for even more money. Only he didn’t have it so his daughter remained in “custody” and now she’s dead.

Initial findings showed the women died from a combination of starvation and dehydration. Their situation had gotten so bad that a few of them had shown signs of fighting over water. But the sad thing is no one was supposed to die.

The man that had returned fire earlier during the shoot-out was supposed to bring provisions with him. However he arrived too late to help. The autopsy revealed the women died a good two days before they were found and so whoever was obliged to feed them appeared to have forgotten his duty.

It seems he was out getting high and so he left the women held off on checking on the women until he had ran out of drugs. And funny this is the same junkie happens to be Lee’s nephew. So Lee ended up trusting the wrong people all because they were family.

That was stupid. And stupidity is not something a man like Lee is known for. Especially as a few years ago he practically ran China Town.

Dennis Lee was infamous and Olinksy had tried to take him down. But like a snake he slithered away and so his case has always hunted the detective. And now that several women are dead because Dennis has been free this whole time – Olinksy has gone to a very dark place.

So much so his wife called Voight to their home. She says the look in her husband’s eyes was something he would get right before his family simply lost him for a couple of months.

Later Voight got the full story of what happened with Lee from Olinksy and afterwards he understood why his friend was losing it. It seems that years ago, during the first investigation, Olinksy was playing fast and loose with his reports. He was bending the law to fit him and so he got caught. His superiors pulled him from the case and two days after they did that – Dennis was in the wind.

Now with their new case and six girls dead, Olinksy doesn’t want to lose him again.

So going off of what he originally found, Olinksy reached to Lee’s former partner. She was a prositiute back in the day but she changed her life a few years ago and even went back to school. However the lowly country that did good still had one vice and it was Dennis. She told the detectives that it was Dennis that brought her over on the boat and so she feels like she owes him everything. And that’s also why she refused to help the cops catch him.

As for Roman, helping that little girl ended up causing problems for him.

In order to get her medical attention, he removed her from the scene and fought another officer to do so. Yet that other officer filed an official complaint and went to get an MRI for a split lip. So Burgess tried to talk to the other man but his ego ensured he was never going to back down. At least not without some kind of monetary incentive. And now her partner has been suspended because of a greedy know-it-all.

Anyways, back with the case, the detectives did find Lee though the mobster’s girlfriend proved to be of no help. It seems the two of them were actually in love because the first thing Lee asked about while in custody was her. He said he was prepared to make a deal in order for her to get immunity but this offer was quickly dismissed.

Olinksy wanted to kill him instead of bringing him but there’s no way he was going to keep on compromising. And Voight was wise enough not to ask.

They had Lee on six murders and so that was more than enough. They didn’t need to know what else he was willing to tell them. And when they were done with him – Olinksy returned home to his family and Voight had a little conversation with the man that filed a complaint against Roman. Apparently no one shakes down a fellow cop in his district.

Nadia hasn’t even passed her entrance exam yet and already Platt is doing everything she can to help. And that includes helping her beat a polygraph.