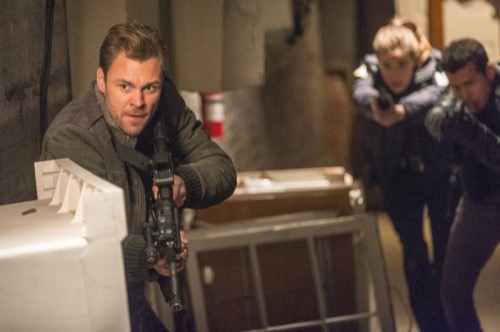 Tonight on NBC their riveting police drama Chicago PD continues with an all new Wednesday February 11, season 2 episode 14 called, “Erin’s Mom” and we have your weekly recap below. On tonight’s episode, Lindsay’s [Sophia Bush] mother gets entangled in a robbery-murder case.

On the last episode, Antonio (Jon Seda) and his sister Gabriela (guest star Monica Raymund) went to the office of Elliot Gish (guest star Robert Knepper), the man they believe started the fire that killed Shay. Intelligence along with patrol officers Burgess (Marina Squerciati) and Roman (Brian Geraghty) put pressure on Gish to try and make him confess. Lindsay (Sophia Bush) approached Voight (Jason Beghe) about returning to Intelligence when she realized that the task force wasn’t what she thought it would be. At the same time Desk Sgt. Platt (Amy Morton) was acting strange and had everyone curious as to why she’s being overly cheery, friendly and nice. Also starring Jesse Lee Soffer, Patrick Flueger, Elias Koteas, and LaRoyce Hawkins. Eamonn Walker, Charlie Barnett and Markie Post guest star. Did you watch the last episode? If you missed it, we have a full and detailed recap right here for you.

On tonight’s episode as per the NBC synopsis, “Lindsay’s mother gets entangled in a robbery-murder case. Meanwhile, Antonio’s former Vice colleague downloads intel to the team, and Voight doesn’t trust the motives of Lindsay’s mother.”

Tonight’s episode looks like it is going to be great and you won’t want to miss it, so be sure to tune in for our live coverage of NBC’s Chicago PD at 10:00 PM EST! While you wait for the recap, check out a sneak peek of tonight’s episode below!

Bunny came in with information on tonight’s episode of “Chicago PD” and Voight seems to be the only one that doesn’t want to trust her. Lindsey immediately took her mother to Vogight when Bunny said one of the renters that frequently uses her husband’s business could have killed someone. However, Voight thinks this is all ploy for Bunny. That she’s just making things up in order to get back in Lindsey’s good graces.

Yet, Bunny wasn’t doing anything to either be altruistic or a good mother. She was simply thinking about herself when she dropped off that information.

Later, after Lindsey and Jay had followed up on her mother’s lead; they ran into a robbery in progress. It seems the guy Bunny claimed to have a “bad feeling” about was in fact wanted by the police for several robberies. Apparently, him and his partner would steal thousands of dollars from check exchanges (if it’s not banks then the feds don’t care) and they would even kidnap family members to get the bank manager to comply.

But, sadly, Jay and Lindsey didn’t know that last part so when they arrived on the scene – they came in with guns blazing. And in doing that they took down one of the robbers (only slightly injuring him) and also left a family at risk.

You see, their prep’s partner was the one holding onto a poor woman’s son and husband. And unfortunately this partner happens to be the violent one. So, although a robbery was stopped; a little boy and his father are now inadvertently murdered because of the detectives.

Meanwhile Bunny is pretending she never heard about this supposed reward money that was offered to anyone who gave up information about these thieves. It appears that she wants to continue to play dumb and will probably stay that right until the promised check of twenty-five grand is handed over. Hence Voight ended up being right about Bunny. Lindsey shouldn’t have trusted her mother!

And the funny thing is Bunny’s payday was never going to happen. Because, despite her claims, Bunny knew more than she let on.

Bunny’s husband owns and run a car rental and Bunny often runs the front desk of this business. So she’s the one that dealt with the clients and according to the other partner Jerry (the one they eventually caught trying to lie low) she tried to shake him and his partner down for more money if they wanted to keep rented a truck. And when she didn’t get what she wanted from them – she turned them in for the reward.

Bunny on the other hand denies everything. She was finally willing to own up to knowing about the reward money, but she promised Lindsey that she didn’t know anything else.

Out of the two culprits, Nick was still injured on the hospital and his murdering partner had been put in a cell. Though when it came time to transfer Jerry to the state prison – the squad was sent into a free fall when they realized their perp had broken out.

Jerry had killed another guy that was in his cell and stolen his idea. So not only did he break out but he literally walked right out the front doors.

Platt, for one, was definitely taking what happened the hardest. Yet, Voight hadn’t felt the same way. He ended up telling Platt that they had all underestimated Jerry and that they were also not going to be making same mistake twice.

Police flooded the city and they were eventually able to find Jerry. Instead of making a run for it, he was attempting to steal his partner’s share when they found him. So the plan was to bring back in and keep close watch.

However, they were unable to even protect Jerry when a previous victim of his somehow got close enough to shoot him.

So Jerry, regardless of his promises, will never be able to escape or hurt anyone else now that he’s dead. But he did at least cause Bunny to lose out on the rewards money. Apparently his earlier statements about her was able to convince others if not Lindsey of her involvement in the whole thing.

Meaning Bunny won’t get her money and luckily Voight saved her from having to deal with a ticked off pimp she owes money to.

Voight paid off Bunny’s debts and he would have done so in secret but Lindsey had found what he did and thanked him. Because no matter what happens – she at least has one parent that’s looking out for her.