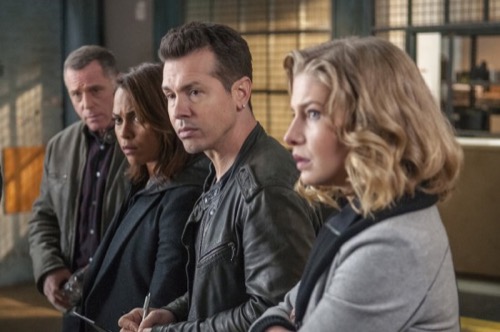 Tonight on NBC their riveting police drama Chicago PD continues with an all new Wednesday February 4, season 2 episode 13 called, “A Little Devil Complex” and we have your weekly recap below. On tonight’s episode, intelligence joins with Firehouse 51 to apprehend the arsonist suspected of killing Shay. Meanwhile, Lindsay [Sophia Bush] reaches out to Voight [Jason Beghe] about returning to Intelligence, and Platt [Amy Morton] acts in a bizarre manner.

On the last episode, Bob Ruzek (guest star Jack Coleman) was the first to arrive on the scene of a double murder. Intelligence arrived to take over the investigation tensions arised as Bob needs to hand over the case to his son (Patrick Flueger) and Voight (Jason Beghe). Lindsay’s (Sophia Bush) new gig had her planning a trip to Bolivia for an undercover investigation that could be for an extended amount of time. Burgess (Marina Squerciati) and Roman (Brian Geraghty) realized they needed to put past events behind them so it didn’t jeopardize them going forward. Jon Seda, Jesse Lee Soffer, Elias Koteas, LaRoyce Hawkins, and Amy Morton also star. Guest starring David Eigenberg, Bailey Chase, Alex Manette and Patrick Mulvey. Did you watch the last episode? If you missed it, we have a full and detailed recap right here for you.

On tonight’s episode as per the NBC synopsis, “Antonio (Jon Seda) and his sister Gabriela (guest star Monica Raymund) go to the office of Elliot Gish (guest star Robert Knepper), the man they believe started the fire that killed Shay. Intelligence along with patrol officers Burgess (Marina Squerciati) and Roman (Brian Geraghty) put pressure on Gish to try and make him confess. Lindsay (Sophia Bush) approaches Voight (Jason Beghe) about returning to Intelligence when she realizes that the task force isn’t what she thought it would be. At the same time Desk Sgt. Platt (Amy Morton) is acting strange and has everyone curious as to why she’s being overly cheery, friendly and nice. Also starring Jesse Lee Soffer, Patrick Flueger, Elias Koteas, and LaRoyce Hawkins. Eamonn Walker, Charlie Barnett and Markie Post guest star.”

Antonio’s sister dragged him into a case involving her late friend’s passing and because of that Antonio might have bitten off more than he could chew on tonight’s all new episode of “Chicago PD”. Earlier, it seems his sister Gabriela had been carrying out her own investigation into the fire that killed her friend Shay and even though she would go on to find evidence of arson along with a perp that matches the description of such a crime – the case still ended up getting dismissed by her superiors. Apparently, the arson investigators doubted her and thus doubted her “evidence”.

So, with no other avenues to turn to inside her own department, Gabriella went to her big brother Antonio. If the Fire Department wasn’t going to act then she was hoping the Police would be a different story. And, for the most part, they were.

All Antonio needed from Gabriela was her assurance that she had the right guy and after that he quickly brought in Adrian Gish for a “special” form of questioning. One that only Voight could carry out. And while Voight got a read off of Gish – he wasn’t able to crack him before he lawyered up.

Afterwards, Voight opened a formal investigation into the fires and Shay’s murder and that ended up revealing a huge blunder he arson investigators missed. Because, as it turns out, Gish’s wasn’t who he said he was. The real Gish died tragically in a fire some years ago and ever since someone had been impersonating.

Though, Gish’s lawyer managed to find an excuse for that as well. He said his client had legally changed his name and that technically he wasn’t committing fraud. But Gish was just too weird for Intelligence to ignore so they started surveillance. And hoped they would catch him tripping up.

But, as Gish would later, they shouldn’t have underestimated him. Gish knew right off he was being followed and so he arranged a display to teach the Chicago PD a lesson – he bombed a squad car.

That was Roman and Burgess’s squad car. And in any other situation they would have gotten some ball busting from their Desk Sgt. Yet, recently Platt has been acting super nice to them. She even let them off the hook for not bringing Gish in.

So Burgess eventually sought Platt out on her own and found out what was going on. And according to Platt, she’s being monitored after someone had complained about her people’s skills. If they find fault with her then that’s it. She could get demoted and just fired all together.

But, besides possibly losing a Desk Sgt., Intelligence is still trying to figure out Gish’s real identity. Before he was Gish, it seems he had stolen the identity of a firefighter that had died some twenty years ago in a fire. So, Gish, whoever he is, has been at this for a pretty long time.

And some people just want him stopped. Gabriella told Antonio that maybe he should let Voight “handle” Gish when they bring him in. She said she preferred his methods yet Antonio couldn’t help pointing her abrupt about face on Voight.

Before, she didn’t like the way he blatantly crossed the line but now that her friend is dead she couldn’t wait to use someone like Voight.

Though, as much as she’s bent on targeting Gish, the detectives found out he’s just as committed to taking her down. Subsequently, after they learned about his real identity, they found his hideaway where he had tons and tons of pictures featuring only one person – Gabriella. It seems he’s been following her for a while and he had even sent her a fake text message to trap her.

Gish had lured Gabriella to an office building and he trapped her elevator leaving her nowhere to go. It was part of Gish’s plan to burn her alive but before he could follow through on it – Antonio showed up.

Antonio took Gish down with one bullet and he saved his sister in the process.

It was a good day for the detectives but because they almost lost so much – not all of them were cheerful to say the least. And then Burgess found out Platt had used her.

The “monitor” was actually a reporter and after Burgess had told him only good things about Platt – he wrote it all up for his article honoring her. So now Platt is considered one of the finest Desk Sgt. around. And Burgess is mad at her.

As for Lindsey, things have been good since she came back and so far she’s enjoying her secretive relationship with Jay. But then her mother called and ruined it like she generally does.