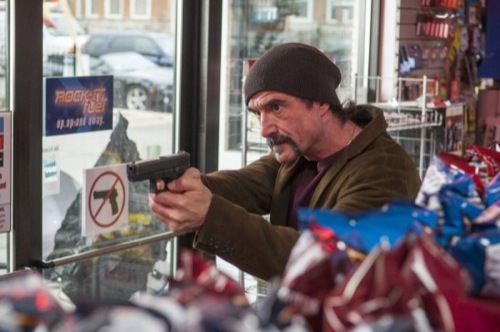 Tonight on NBC their riveting police drama Chicago PD continues with an all new Wednesday January 14, season 2 episode 11 called, “We Don’t Work Together Anymore” and we have your weekly recap below. On tonight’s episode, intelligence helps the feds crush a drug cartel. Meanwhile, Burgess [Marina Squerciati] returns to the job, yet is relegated to desk duty, giving Platt [Amy Morton] the chance to partner with Roman.

On the last episode, with Burgess (Marina Squerciati) in the hospital after suffering gunshot wounds, the intelligence team was determined to find the people responsible. Lindsay (Sophia Bush) delayed her start so she can help with this case. Search of the house provided a lead and when a bomb was triggered a key suspect is found. Meanwhile the team took turns watching over Burgess. Voight (Jason Beghe) informs Burgess of a new opportunity that this affords her. Also starring Jon Seda, Jesse Lee Soffer, Patrick Flueger, Elias Koteas, LaRoyce Hawkins, Brian Geraghty and Amy Morton. Did you watch the last episode? If you missed it, we have a full and detailed recap right here for you.

On tonight’s episode as per the NBC synopsis, “Lindsay (Sophia Bush) has her first case with the task force and realizes she needs to call on Voight (Jason Beghe) and the Intelligence unit to assist. Meanwhile Burgess (Marina Squerciati) is back on the job, but relegated to desk duty which allows Desk Sgt. Platt (Amy Morton) the opportunity to partner up with Roman (Brian Geraghty).”

Lindsey’s first day on the new job ended up being a bust on tonight’s all new episode of “Chicago PD”. The task force was supposed to take down Mendozza, the key to all drugs trafficking into the city, and yet their shining moment was ruined when their own informant apparently turned against them. Kylie, Mendozza’s girlfriend, had given the task force allegedly good info but then she disappeared at the same time Mendozza did. So the team was left with no other choice but to suspect her and that came as a personal blow to Lindsey. You see Lindsey was Kylie’s handler and she could have sworn she wasn’t being played here.

Though with the way things stood, Lindsey ultimately had to write Kylie off. So she tried to recover ground the task force had lost when Mendozza went underground. She told her superior that with the help of old unit – they had better chance of finding out where Mendozza has been hiding.

And she was taken up on her offer. Yet while Lindsey was being upfront and even helping her new team with their agenda – her superior on his end had withheld vital information. It seems he didn’t think it was important to mention Kylie’s daughter. The very same one she had dropped off with her brother earlier because she didn’t trust Mendozza to be around the toddler.

Now that doesn’t sound like a woman that would turn on the feds, the only people that could protect her and her child from Mendozza. So right away Lindsey realized they weren’t dealing with runaway lovers but instead with a hostage situation. Wherever Mendozza has Kylie – she’s not there willing. And that frustrated Lindsey to no end that her boss would sit on information like that.

Luckily, however, the people that she does trust are the ones that’s scouring the city.

The old Intelligence until couldn’t wait to be a part of the case. Not only is a federal check gives them more than they normally earns but assisting in the takedown of a guy like Mendozza earns them serious cred. Plus, Lindsey’s old unit misses her and will be thankful to be working with her again.

Lindsey’s replacement hasn’t taken up the seat yet and although they love Burgess – she’s not Lindsey. Also Burgess isn’t back to her normal self.

Ever since she was shot, Burgess has been antsy and even a tad moody. She’s been snapping at people and her sergeant has taken noticed. So for the time being, Burgess is on desk duty. And Platt has partnered up with Roman.

Burgess isn’t the only one that’s been affected by her shooting. Her partner Roman has been blaming himself as well so Platt took this time as his partner to help deal with what happened. And while she was at it she also helped both the police and the feds get closer to Mendozza.

Before Mendozza fled, he called for a meeting with all his top guys. He said he was going to divide up the money for them in one last payout. Yet one of his men chose to go on the run himself rather than attend that meeting.

So that’s who Hank and Dawson got a hold of. To get information, they were going to break him like they usually do to suspects when suddenly Lindsey’s boss stopped them. It seems the other man prefers making a deal than allowing cops to mistreat a suspect.

Hence things were tense between the two joint forces yet while Lindsey’s team didn’t yield much – thanks to Platt – Voight and his men got back into the game with their new information. And once they – it was back to their old and more slightly illegal ploys.

They maneuvered, they lied, and they threatened. And it seems that’s what needed to be done to catch Mendozza before he could Kylie. Mendozza knew one of his people had turned against him. Yet, he didn’t want to bother trying to figure out who it was – he was simply going to kill everyone.

And that meant Kylie was already on the chopping block.

Though, Voight and his men did end up getting to Kylie in time. She was a bit banged up yet she was going to be ok. And later she was just excited about being reunited with her daughter.

But Lindsey found out some rather crappy news after that reunion. She learned there may not be enough money to relocate Kylie and her daughter. And she promised Kylie they were going to protect her. So it looks like there’s dark side in working with people in Washington – they can’t keep their word.

Halstead stopped by Lindsey’s house and maybe it was to make herself feel better but she ended up finally sleeping with him. And that might make things awkward if she does decide to come back.

Lindsey’s position at Intelligence is going to remain open a little while longer. Burgess turned down when she realized her partner needed her on the beat still!