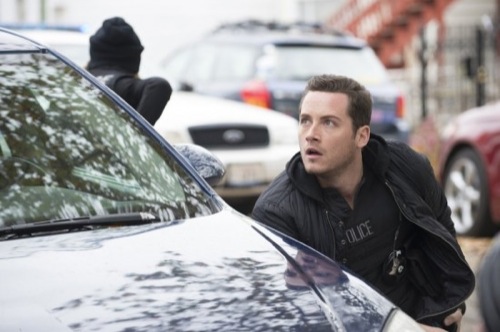 Tonight on NBC their riveting police drama Chicago PD continues with an all new Wednesday January 7, season 2 episode 10 called, “Shouldn’t of Been Alone” and we have your weekly recap below. On tonight’s episode, Burgess lands in the hospital with gunshot wounds following an investigation into a potential terrorist threat. The intelligence team seeks the people responsible as Lindsay [Sophia Bush] offers a helping hand on the case.

On the last episode, a friend of Nadia’s (Guest star Stella Maeve) lead the intelligence unit to a huge heroin bust. Unfortunately this bust resulted in Olinsky (Elias Koteas) arriving home to find the suspects were holding his wife (guest star Melissa Carlson). Voight (Jason Beghe) and the team thought they found a common thread with the suspects but it was not who they thought. Meanwhile Burgess (Marina Squerciati) and Roman (Brian Geraghty) were given an assignment where they got paired with a K-9 officer, Jenn Cassidy (guest star Spencer Grammer) who was Roman’s former partner and girlfriend. Did you watch the last episode? If you missed it, we have a full and detailed recap right here for you.

On tonight’s episode as per the NBC synopsis, “with Burgess (Marina Squerciati) in the hospital after suffering gunshot wounds, the intelligence team is determined to find the people responsible. Lindsay (Sophia Bush) delays her start so she can help with this case. Search of the house provides a lead and when a bomb is triggered a key suspect is found. Meanwhile the team takes turns watching over Burgess. Voight (Jason Beghe) informs Burgess of a new opportunity that this affords her. Also starring Jon Seda, Jesse Lee Soffer, Patrick Flueger, Elias Koteas, LaRoyce Hawkins, Brian Geraghty and Amy Morton.”

Burgess and Roman were surveilling the area, like any other night of duty, when out of nowhere a stray bullet target Burgess. Roman quickly checked up on his partner and then attempted to pursue the shooter but when he followed what he thought was a suspect into the house – he learned his friend wasn’t attacked intentionally.

Roman found out that someone had set up a house to attack all intruders and apparently Burgess triggered the safety measures when she rang the bell. It seems that whoever had booby-trapped the house hadn’t wanted anyone to see what was inside. And that was a body that someone had been slowly dissolving in the bath tub!

Roman was lucky enough to escape the house after he tripped one of the alarms but besides getting out alive – he felt like a complete failure. He blamed himself what happened to Burgess. And Hank eventually granted an opportunity to make it up to her.

Later, when he assembled a task force, Hank asked Roman to be a part of the team. And that really didn’t go that well with Ruzek who was also Burgess’s boyfriend.

The victim in the bath tub was a dean at some college but at least they got their hands on the prime suspect fairly quickly. Someone named Travis had left his car behind at the crime scene and when they traced that car to Travis’s home – they found yet another crime scene. Because whoever had killed the dean also killed Travis.

But both men tankfully only had one connection between them. And that was they both knew Webber. Webber and the dean had mentor relationship meanwhile Travis was Webber’s son. So right away the team was able to figure out that Webber must be the true target and that people must be killing off people close to him in order to hurt him.

However no could have foreseen why someone do so much to a man like Webber. Webber was merely a professor and illustrious one at that, yet some time ago he took out a restraining order against one of his former students named Spencer. Spencer was a bright kid that sadly snapped under the pressure.

It appears that his thesis which was about one person being a catalyst to trauma was rejected by Webber and now Spencer wants to prove h point using real people!

In the meantime, though, the tense situation between Ruzek and Roman isn’t helping anyone. There was a moment where Roman saw something that Ruzek hadn’t. And so Roman tried to warn the other man but was ignored. Hence their silent feud resulted in Ruzek triggering a bomb just to spite Roman.

The men nearly came to blows after that but were luckily pulled apart by Lindsey and Jay. So it’s a good thing Lindsey hasn’t left the team yet because something would have fallen apart without her. And then where would the investigation be?

The wife had been cheating on her husband and Spencer wanted to shame him with that information. So that Webber where she had been meeting up with her lover and though he was ashamed to say it out – he gave them the location they needed in order to save his wife. It looks like he still loves her despite her transgressions.

Yet when they found the Mrs., she was rigged to several explosives. Even in his insanity, it appears that Spencer still knew what he was doing. And the best way to truly kill that woman was to cause so much confusion – the police would be the ones that had end up killing her.

But Jay and Roman thwarted him by somehow making a great time and they were able to diffuse the bomb before anyone could be hurt.

Burgess, on the other hand, survived surgery but she doesn’t seem like she’ ready to get back to her old self anytime soon!