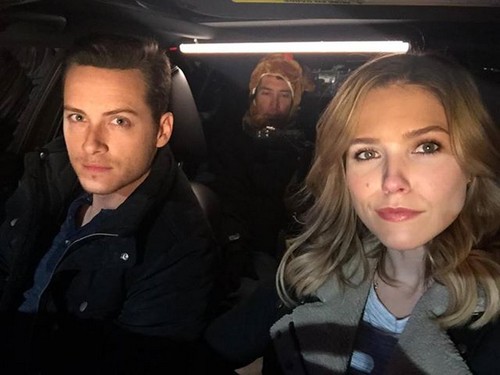 Tonight on NBC their riveting police drama Chicago PD continues with an all new Wednesday December 10, season 2 episode 9 called, “Called in Dead.” On tonight’s episode, a huge drug bust puts Olinsky’s [Elias Koteas] family in danger. Meanwhile, the team digs up a common thread with the drug suspects, and Burgess [Marina Squerciati] and Roman are paired with a K-9 officer, who is Roman’s former girlfriend.

On the last episode, intelligence worked the case of a wealthy diamond dealer gunned down on Antonio’s watch. While Antonio (Jon Seda) continued his off-duty security job for Asher (guest star Michael Park) and Layla (guest star India De Beaufort), Asher was killed. Voight (Jason Beghe) and Olinsky (Elias Koteas) made sure Antonio was covered. While they worked the case Halstead (Jesse Lee Soffer) and Lindsay (Sophia Bush) went undercover in a rather uncomfortable location. Kot (guest star Chris Agos) showed up to ask Lindsay for an answer. Patrick Flueger, Marina Squerciati, LaRoyce Hawkins, Brian Geraghty and Amy Morton also starred. Guest starring Stella Maeve and America Olivo. Did you watch the last episode? If you missed it, we have a full and detailed recap right here for you.

On tonight’s episode as per the NBC synopsis, “a friend of Nadia’s (Guest star Stella Maeve) leads the intelligence unit to a huge heroin bust. Unfortunately this bust results in Olinsky (Elias Koteas) arriving home to find the suspects are holding his wife (guest star Melissa Carlson). Voight (Jason Beghe) and the team think they’ve found a common thread with the suspects but it’s not who they think. Meanwhile Burgess (Marina Squerciati) and Roman (Brian Geraghty) are given an assignment where they get paired with a K-9 officer, Jenn Cassidy (guest star Spencer Grammer) who is Roman’s former partner and girlfriend.”

Tonight’s episode of Chicago PD begins with Erin rushing in to a building, Nadia called for help – she has her friend Alicia in the bath tub and she is overdosing.  Erin begs Alicia to tell her where she got the heroin from while she is drifting in and out of consciousness.

Meanwhile at a strip club men barge in with Ski masks and guns and take everyone hostage.  The owner tries to give them the money in the safe – but they want the keys to the basement.  They head down in to the basement where men and women are packaging heroin.  While two men begins filling their bags with bricks of heroin, another man hammers a whole in to the wall with a sledgehammer.  The bar’s guards head to the basement, but the thieves have already gone through the wall and disappeared with the heroin.  Once they are around the corner they take off their masks and it is actually Erin, Antonia, and Ruzek.

Back at the police station they all celebrate, Erin explains that Alicia was a stripper at the club and she was the one that gave them a tip.  Erin tells Nadia to get her thumb print – and gives her attitude.  Nadia doesn’t understand why she is mad at her – at least she called her.
Roman and Burgess arrive at work and learn they are on “psycho duty.”  There is a foreign president arriving in town and they have to check in on all of the psychos who have threatened to assinate him and make sure they aren’t dangerous.  They have another cop joining them with her canine unit – and Roman is not happy when he realizes it his ex-girlfriend.  He groans that he should have “called in dead.”

Erin is working on the club manager Trenton – they put him up on the board and he has no priors.  They know he is a low man on the totem pole and he answers to a man named “blue.”  Trenton has been calling “Blue” and trying to buy some time – he lost almost $2 Million in heroin.  So he needs to either hit the road and go in to hiding or fork up $2 Million to Blue.  They decide to bring in Trenton – and at first he totally denies he has any drugs in the building and he then Antonio reveals that they are the ones that robbed him.  They tell Trenton to set up a meeting with Blue and lie and say that he got robbed by the biker gang Outlaws.

Trenton caves and sets up the meeting, Erin and her team are set up waiting for Blue.  When he arrives and realizes he has been set up, Blue takes Trenton hostage and holds a gun to his head – after a moment or yelling Blue drops the gun and says “okay officers take me to jail.”  Once they get Blue in questioning – Ruzek and Jay demand to know who gives him the orders.  Blue laughs that he isn’t corner boy that is just going to flip – but he would like a sandwich.

Voight calls Nadia and Erin in to his office and demands to know everything that happened to Alicia.  Erin explains that she was overdosing and Nadia brought her to Erin’s apartment and that was how she got the intel.  Voight kicks Nadia out and demands to know why Erin didn’t tell him the truth – if this comes back on them they could all be in trouble for entrapment.  Voight says that maybe the offer to join the task force has her distracted.

Atwater has been on the wire tap all day and it’s been silent since they picked up Blue.  He tells Voight he thinks someone tipped them off.  But, Voight says that isn’t possible – they have Trenton and Blue and haven’t given them a chance to make a call.

Alvie heads home to his wife Meredith and finds her in the livingroom being held hostage.  Two men with machine guns tell Alvie that they know he sole their heroin and if he doesn’t go to the police station and get it all and give it back they are going to kill his wife.  One of the men drives Alvie back to the police station – he tells Alvie that if he tries to warn any of the cops about what is going on he will text his brother and tell him to kill his wife.  Alvie brings the drugs back to the car out of the evidence room and grabbed a gun while he was in there and climbs back in the car and shoots the drug dealer in the car and kills him.  Alvie gets back up and heads back to his house, he and Voight arrest the other drug dealer and Voight tells Alvie that he can kill him.  Alvie thinks about it – but then sees how horrified his wife is and decides against it.

They take the guy that kidnapped Alvie’s wife back to the police station and Alvie and Voight demand to know who tipped them off and how they got Alvie’s address.  Alvie taunts him and tells him about how he killed his brother – and tells him that his brother was scared just like he is now.
Nadia’s friend Alicia heads to the police station with her – and Erin thanks her for the tip she gave them about her dance club.  Erin reassures Nadia that she will talk to Voight and put in a good word for her since he has been giving her the cold shoulder.

Jay ID’s the brothers that kidnapped Alvie’s wife and found out Blue’s real name and realize they all have rap sheets a mile long and should have been locked up years ago – but they keep going before Judge Lachlin and keeps letting them off.  Antonio says that Lachlin got in trouble for taking bribes like four years ago, and they pulled his financials and he has a stash house that he purchased through shell accounts.

Voight and Ruzek head to the stash house and find Judge Lachlin in bed with a much younger woman.  They bring him in for questioning and the judge insists that he has nothing to do with the heroin ring.  Commander calls them all out of the interrogation room and tells them to cut the judge loose ASAP – they are out of their jurisdiction.  A DEA agent stops by the station and tells Erin that she will regret joining the task force and work for the feds.

Atwater traces a call one of the brothers made to the judge’s office, and they realize it was his secretary Evan that they talked to.  Erin and Jay rush to the court and trap Evan in the parking garage  – they arrest him and empty his trunk and find kilos of drugs and stacks of cash.  Erin jokes that they found their king pin and Jay cuffs him and arrests him.  Erin and Jay question Evan and realize that he was forging the judge’s signature and getting men like Blue and the crazy brothers out of prison.  Evan insists that Blue and the Crazy brothers approached him and told him that if he cut them loose they would offer him a cut.

At the police station Burgess and Ruzek sneak away in to the supply room to make out, she whines that she doesn’t want to be like Roman and his ex-girlfriend but Ruzek reassures her they aren’t breaking up.  Erin stops by Voight’s office and tells him to give Nadia another chance and he shouldn’t be mad at her.  She reveals to voight that she has been thinking about joining the task force a lot and it feels like the right fit – he tells her he is proud of her and whatever decision she makes he will support her.

Erin walks out and announces to Jay, Ruzek, Alvie and the rest of the team that she has thought long and hard and she has decided to take the federal job.

Roman, his girlfriend, and Burgess are checking on the last crazy case.  Roman and his ex are standing outside the house arguing over when they broke up.  Burgess gets tired of waiting for them and walks in to the house and she is shot.