Chicago PD Recap “Debts of the Past”: Season 3 Episode 4 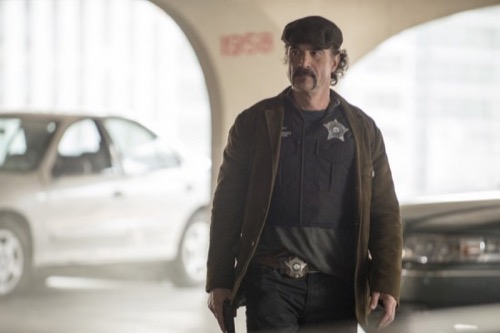 Tonight on NBC their riveting police drama Chicago PD continues with an all new Wednesday October 21, season 3 episode 4 called, “Debts of the Past” and we have your weekly recap below. On tonight’s episode, Voight (Jason Beghe) and Olinksy (Elias Koteas) hunt an ex-con who’s targeting cops.

On the last episode, a man whose daughter was missing takes a member of the team hostage. In other events, Voight learned that Bunny has made new accusations regarding an old case; and Antonio was shocked by a secret that Olinksy has been keeping. Did you watch the last episode? If you missed it, we have a full and detailed recap right here for you.

On tonight’s episode as per the NBC synopsis, “Voight and Olinksy hunt an ex-con who’s targeting cops; Atwater accidentally reveals information about Ruzek’s past that unsettles Burgess; and Platt tasks Burgess and Roman with handling a high-society dognapping case.”

Tonight’s episode of Chicago PD picks up where we left off last week – a car bomb just exploded outside of Hanks house and nearly killed him, his son Justin, and his wife. Everyone is safe – barely. While the car is up in flames, Hank calls the fire in. After everyone is cleared by the EMT’s, Hank’s team meets at the precinct – they know that it was James Beckett that planted the car bomb, he shouts at them to find Beckett ASAP.

Meanwhile, another call of a carbomb comes in – they head to the scene and learn that the victim is a retired Chicago PD named Logan, he was a member of Hank’s team when they took down Beckett years ago. Hank and Olinsky start tracking down their old partners to warn them that James Beckett is out of jail and out for revenge.

At the precinct, Burgess overhears Ruzek and Atwater talking about the bachelor party and Atwater slips up and says that it is Adam’s third bachelor party. Burgess is not happy, she thought that he had only been engaged once before he met her. They have to deal with it later, Trudy sends Burgess and Roman to track down the Dominguez brothers because their fingerprints were found on the bomb that was in Hank’s car.

Jay and Lindsay have been working all day trying to track down Beckett – they bribed his lawyer’s secretary and got a cell phone number and tracked the phone. Hank and his team move out once they get an address on the phone’s location – they find James Beckett riding around in a cab and bring him back in to custody.

Back at the precinct, Olinsky and Hank head in to the interrogation room to question James Beckett. James rants that one of the cops on Hank’s team took $1 Million from him when he arrested him – Hank says he doesn’t know anything about the money. Meanwhile, Beckett’s lawyer shows up at the precinct, Beckett has an iron-clad alibi, he was at his lawyer’s office all night working on his lawsuit against the city of Chicago and Hank Voight. Hank has no choice but to set Beckett free, because they don’t have enough evidence to pin the car-bombings on him yet.

Hank’s team pulls the transcripts from Beckett’s court case. They listen to the old wire taps, and they hear Beckett’s guy telling him after the raid that the police seized heroine, guns, and $2 Million in cash. The only problem is that the cops only logged in $1 Million. So, Beckett was telling the truth – someone on Hank’s team really did steal $1 Million from him when he was arrested. Hank takes Olinsky aside, he tells him that he won’t be mad but he needs to know the truth, and asks if he stole the money when they arrested Beckett. Olisnky is furious – he can’t believe that Hank is accusing him, he tells him to “go screw himself” and storms out of his office.

Olinsky’s wife stops by the precinct, she is still furious about his secret daughter – she rants that he destroyed their whole family and didn’t even bother to get a DNA test first and make sure it was his kid. After work, he stops by Dawson’s gym where his daughter is working out in the boxing ring. When nobody is looking he steals her mouthguard so that he can run a DNA test on it.

Back at the precinct, they are still tracking Beckett’s cell phone even though they had to set him free. Hank tanks Antonio with him to go investigate the number that Beckett has been calling – it’s Hank’s old partner Schultz, the same guy that he and Olinsky warned earlier about Beckett’s car bombs. Schultz rants that he was a “straight cop” his entire life, and there is no way that he stole $1 Million. Schultz shouts at Hank that Beckett was calling him and threatening him – they weren’t working together. He says that Beckett told him he would kill his son if he didn’t help him find out who stole the money.

Meanwhile, Roman and Burgess are still sitting in their squad car and watching the Dominguez brothers’ house. Burgess has been freaking out all day about Ruzek’s secret engagement. Roman says that she should give Ruzek the “push test” and push the wedding back a year – if Ruzek agrees with her, then he doesn’t really want to get married. If he gives her lip about it then that means he does.

While they are arguing about the wedding – the Dominguez brothers come out of their apartment and make a run for it – Burgess and Roman track them down an alley and in to an abandoned building. They find a bucket full of empty gun powder containers that were used to make the car bombs. They manage to catch the two Dominguez brothers and cuff them and take them in to custody.

Back at the precinct, Mouse catches Olinsky ruffling through papers on Beckett’s case – he shows him how to look up the testimonies from the case on the computer, Beckett realizes that in the wire tap Beckett was talking about a guy named Nathan Whitcomb and they never arrested him or brought him in because they didn’t have anything on him. Olinsky tells Mouse to call in everybody now – he thinks he may have just figured out where the money went.

Hank and his team raid Whitcomb’s house and bring him in to custody – they play the wire tap where he told Beckett that the police raided his warehouse and took $2 Million in cash. Olinsky accuses Whitcomb of stealing the money himself and lying and saying that the police took it. Lindsay knocks on the door and says that something came up – they found a pipe bomb on Olinsky’s car and the fingerprints on it match the Dominguez brothers. The Dominguez brothers rolled over on Whitcomb an say that he is the one who hired them, on behalf of Beckett.

Olinsky and Hank head back in to the interrogation room, after they rough him up a bit – Whitcomb agrees to cooperate. He calls Beckett and comes clean and tells him that he stole the money. He promises to give it back to him and they set up a time and place to meet for the transaction. Of course, Hank’s team is waiting there to make their move. Whitcomb heads to the parking garage where he is supposed to meet Beckett – suddenly someone sets off a smoke bomb in the parking garage and Hank and his team lose sight of Whitcomb.

Hank runs in through the smoke and gets his hands on James Beckett – he holds him over the railing dozens of floors over the ground and threatens to shoot him in the head. Olinsky arrives and manages to talk Hank down and they take James Beckett back in to custody – for good this time.

Back at the precinct, Olinsky’s daughter shows up to surprise him – apparently she made him cookies from scratch and wanted to drop them off on her way to the gym. She invites him to stop by the gym later and check on her progress. She gives him a hug and leaves. In the lockerroom, Burgess gives Ruzek the “push test” and he fails – he thinks it is a good idea to push the wedding back a year. On his way out of work, Olisnky stops by a mail box and mails his daughter’s DNA test in.