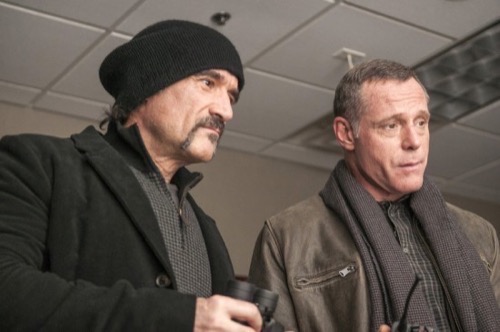 Tonight on NBC their riveting police drama Chicago PD continues with an all new Wednesday March 25, season 3 episode 18 called, “Say Her Real Name” and we have your weekly recap below. On tonight’s episode, the death of a protester at a world trade event seems to point to an Argentine official. In other events, Halstead’s brother arrives in town; and is soon stirring up trouble

On the last episode, the team hunted for a hired assassin when an innocent bartender took a bullet meant for Halstead. Meanwhile, Platt and Nadia came to an understanding following a tense interaction. Did you watch the last episode? If you missed it, we have a full and detailed recap right here for you.

On tonight’s episode as per the NBC synopsis, “with a World Trade conference in Chicago, all members of intelligence are undercover in various protest groups to determine potential threats. Ruzek (Patrick Flueger), infiltrates the Black Grid group and befriends Sierra (guest star Lucy Blehar). When she ends up dead intelligence is suspicious of an Argentine Secretary, Fabian Sosa (guest star Gary Perez). Voight (Jason Beghe) and Olinsky (Elias Koteas) question Sosa about the death and the team enlists Mouse (guest star Caleb Hunt) to help with their tech needs in tracking Sosa. Meanwhile Halstead’s (Jesse Lee Soffer) brother, Dr. Will Halstead (guest star Nick Gehlfuss) shows up in town for an undetermined amount of time and is already stirring up trouble.”

Downtown Chicago was a mess what with all the protestors hanging around. Apparently a World Trade conference ended up bringing out the worst in people and environmentalist tend not to mess around when they makes threats. So the Intelligence Unit was taking every single one that came their way seriously and had even infiltrated a few groups to get a feel of them. However no one reported running into a potential terrorist and at best Ruzek managed to wrangle a date out of the whole thing.

It seems he attracted a girl called Sierra. Now that wasn’t her real name because they met in an underground environmentalist group but she appeared to be truly interested in Ruzek. He on the other hand had a girlfriend but was charmed by his new friend. And so when she called him asking for help – he was willing to break cover in order to see if she was really in danger.

Unfortunately, though, he was much too late to have been of actual help because by time he arrived at the hotel she mentioned, Felicia Hughes was already falling off the roof. Whether she was pushed or not is a tad unclear yet when the man, who had rented the hotel room in which she fell from, refused to answer any questions he thereby made everyone suspicious of his actions. For example why wouldn’t a diplomat want to clear his own name?

And, as it turns out, a man Fabian Sosa might show some reluctance around the police when he’s known for getting into trouble in various countries for solicitation.

That kind of thing is something a diplomat would want to bury. And though Ruzek didn’t think Sierra later identified as Felicia Hughes would do something like that – not only was her attire on the night she was murdered risqué but also a video of her sexual encounter with Sousa eventually surfaced. So Intelligence had proof that Sousa knew her and all they needed was a motive. If not for the diplomat then for someone who wanted him to be dragged into yet another scandal.

There were bruises on Felicia’s arms and enough drugs and alcohol in her to ensure she never put up a fight if someone pushed her. So using that as their only form of evidence, they frightened the diplomat into talking.

Not that they had any legal grounds to do so but Ruzek was really pushing his team into doing the right thing instead of what constitutes as the ethical thing. And his behavior towards this case was also affecting his relationship with Burgess. She suddenly began worrying about everything that happened while her boyfriend was undercover.

Nevertheless, the investigation yielded a name. Mason Rutowski. Mason also known as Mad Max was the leader of the environmentalist group that both Sierra and Ruzek infiltrated. And it seems like that on the side he’s also a blackmailer and a teacher.

The truth is that the teacher was broke so he asked someone from his group to help him blackmail a diplomat. And poor Felicia had volunteered when she thought she was helping get rid of a corporate big name. Yet she was fooled and when out what she was really being used for – she didn’t want any part of the blackmail scheme.

Max, though, wasn’t the one that had talked her into prostituting herself. He had no idea what they were talking about when the cops dragged him in for questioning. And he didn’t even know how they found information coming from his computer.

Hence, he was hacked. And, luckily, Mouse with his vast experience in this field was able to decipher that.

Sadly for Mad Max, he was hacked by his friend the Pope. Another member of the environmentalist group but who it seems was just an opportunist underneath it all. No higher ambitions and no thought whatsoever to taking down the man. Just a guy that wanted to make fast cash.

So in reality it took a good minute and a couple of punches from Ruzek to get him to confess to murdering Felicia. He said she was going to go to cops and, because he was thinking about going through with the plan anyhow, he found a way to stop her.

And then Ruzek tried to find a way to deal with Felicia’s death which ended up not being that easy for him. So he might have built a closer bond with her than he let on.

As for the rest of the team, they tried to get on with their day but Halstead found out that someone had beaten up his, hotshot of a doctor, brother.