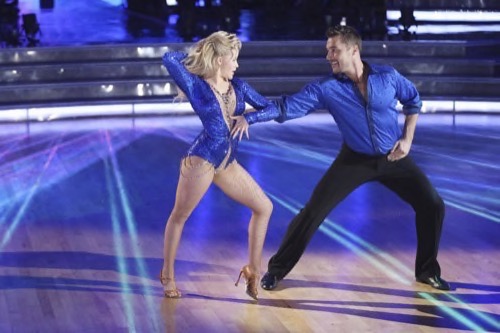 Tonight on ABC Dancing With The Stars returns for a third week with Latin Night. Chris Soules and his professional dancer Witney Carson danced a Argentine Tango to “Dangerous” by David Guetta featuring Sam Martin. On tonight’s episode the eleven remaining celebrities debut a new dance style, on what’s always the hottest night of the season. Did you watch tonight’s episode? If you missed it we have a full and detailed recap, right here for you. Did you miss any of tonight’s performance videos? If you did we have them all, right here for you!

Judges’ comments: Julianne: “You are the comeback kid. You just came back so focused, you were on point.” Bruno: “So much stronger, so much more present. It was a good job, your musicality was improved, you just need to have smoother turns.” Carrie Ann: “I really appreciate that you let go of farmer Chris vibe, you were powerful and magnificent.” Len: “You did what you are supposed to do, come back strong after a bad week.”

Watch the video below and let us know what you think, do you agree with the judges comments? Do you think Chris did enough to avoid elimination next week? Sound out in the comments and let us know your thoughts?