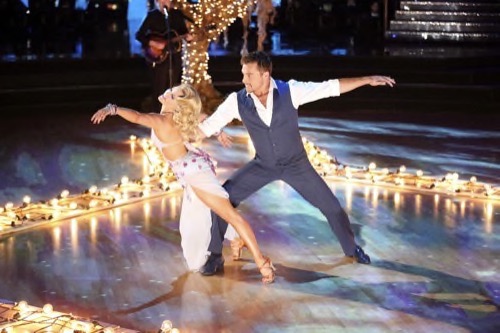 Tonight on ABC Dancing With The Stars returns for a fifth week with when each celebrity competes during the highly anticipated, “Disney Night.” Chris Soules and his professional dancer Witney Carson danced a Quickstep routine to “Zero to Hero” from Hercules.  On tonight’s episode the nine remaining couples will then perform to songs from Walt Disney Animation Studios films including “Aladdin,” “Mary Poppins,” “The Little Mermaid” and “Frozen.”

On last week’s premiere episode of DWTS Chris performed a Rumba routine and the judges scored Noah a 28/40 for his performance. Julianne loved his performance and had this to say, “I have to say you have improved every week, what is missing is a connection between the two of you.”

Judges’ comments: Len: ‘You did this fine, it is a quick dance, you did fine, well done.” Julianne: “We have been tough on you, I think you are getting in the way of yourself, you need to work on your musicality.” Bruno: “You were magnificent, you have to listen to the music, let the music transport you.” Carrie Ann: “I thought this was your best performance by a long shot. You pulled it off, you were in character, you only made one mistake.”

Watch the video below and let us know what you think, do you agree with the judges comments? Do you think Chris did enough to avoid elimination next week? Sound out in the comments and let us know your thoughts?