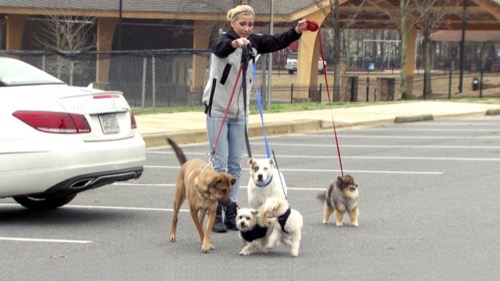 Tonight on USA Network their reality show Chrisley Knows Best returns with a two episode premiere with an all new Tuesday June 16, season 3 episode 5 & 6 called “Dollars and Sense; Chrisleys on Campus”. We’ve got you recap down below! On tonight’s episode odd puts Savannah on a budget to help her prepare for the real world; and Savannah’s fired from two jobs.

On the last episode, in the season 3 premiere, a magazine asked the family for an interview about fashion. Todd insisted that everyone followed a script of his creation, but his plan didn’t work quite as intended; Todd stepped in as coach of Grayson’s baseball team, but as soon in over his head. Did you watch the episode? If you missed it, we have a full and detailed recap right here for you.

On tonight’s episode as per the USA Network synopsis, “odd puts Savannah on a budget to help her prepare for the real world; and Savannah’s fired from two jobs. Also The Chrisleys visit Nashville to tour a college campus. While there, Savannah decides to go out with new friends, which disrupts Todd’s planned family-bonding time.”

Tonight’s episode is going to be filled with drama and you won’t want to miss it, so be sure to tune in for our live coverage of the show tonight at 10 PM EST! While you wait for our recap hit the comments and let us know how excited you are for “Chrisley Knows Best” season 3.

Julie is going away for the weekend with her mother-in-law. Apparently, the two women feel like they’ve let themselves go and now they want to get into shape. So, unfortunately for them, they’ve joined a dieting and exercising seminar.

And while they’re off being overworked and practically starved to death, Todd remains the sole parent in charge back home.

Now, normally that would be fine but recently Todd has begun to worry about his kids and their future. It seems that it finally dawned on him that spoiling his kids eventually won’t do them any good in the long run. So he’s enacted a plan to fix all of that. Todd is going to be putting the kids through a test while their mom (the more lenient one) is too far away to be of any help.

Savannah is going away to college a year early and while she should be focusing on which college to attend – she’s currently outfitting not only her college wardrobe but also the house she’s pretty sure her father will buy her. So Todd wanted to teach his daughter a little something about budgeting. And he gave Savannah a limit of a hundred dollars to last a whole week.

He said he wanted her to live within means and technically a hundred dollars a week isn’t that bad. But Savannah somehow found that concept too hard. And for her, there were things that were much more important. Like shopping.

She ended up blowing her week’s allowance on three hours of shopping and ultimately ran out of gas on the side of the road because she was expecting her mom to full it up for her.

Todd was upset of course but when he went to scold her – Savannah told him not to worry. She said that she got two jobs and that she no longer needed her dad to bail her out. Though in less than a day she came to lose both jobs because of incompetence.

She was supposed to watch her nephew for her sister yet she ruin the little boy’s schedule by dragging along on her dog watching job during his nap time. So that caused Lindsie, her own sister, to fire her. And as for dog watching, Savannah found that all to be too much. She just couldn’t look after so many of them and she later refused to clean up after them. So dogs and kids turned out to be not for her.

Her entrepreneurial skills however is what came in handy.

Savannah realized she had to pay a few people back so she started to sell her clothes (and maybe a few of her father’s things). And she used the money she got from that to pay off her dad for the gas money. Plus she paid off her brother Chase for helping watching the dogs earlier. So by the end of all of that she still had some cash left over and surprisingly she chose to open a bank account with it rather than spend it all.

So what do you know, she learned something!

And on the second part of tonight’s episode, the Chrisleys decided to start the college tours. They took Chase and Savannah to check one college in particular and the parents are hoping that it will help change Chase’s mind.

Chase it seems doesn’t want to go to college. He figured his father didn’t go and was still able to make a success of himself so why should he go? But Todd really wants his son to attend the same school as Savannah. Apparently he believes Chase will look after his younger sister and will keep her safe. Though, Julie thinks a future scenario with both children will more be Savannah running around in an attempt to look after Chase.

So Todd’s “dream” is slightly delusional but it does get him excited about the college tours.

However neither of his children looked like they’re willing to cooperate with their father. See they wanted to do their own thing while they were looking at campuses and they didn’t want to spend hours and hours being cooped up with their parents. But sadly that’s exactly what ended up happening because their plans of escaping literally went out the window on the first day they set out.

Todd had accidentally lost the car keys while they were driving up to Nashville and decided to stop for lunch. So the family all had to squish into one room at an inn while they waited for Grandma Faye to come meet them with an extra pair of car keys. And after she drove so far, she figured she might as well go on the tour with her family.

So Chase had to drive up with her instead of with his parents. And after Todd finished embarrassing his kids on a college tour of Lipscomb, his kids then said they were going to hang out with their new friends, thereby upsetting their father.

Todd followed his kids on their night out and was soon chastised by Savanah when she saw through his disguise.

Todd eventually left his kids to have fun but it later hit them that his kids are all growing up. It seems he’s been holding on so tightly out of fear. He doesn’t know what he’ll be when all the kids have left the house and no longer need him.

But Julie assured him that wasn’t true. She said the kids will always need them and later Savannah said the same thing. For instance, she knows how much her father loves her but right now she just needs some breathing room.

And anyways Todd didn’t want his kids missing out. So he was really happy when his daughter got into college and when Chase changed his mind about one day going.