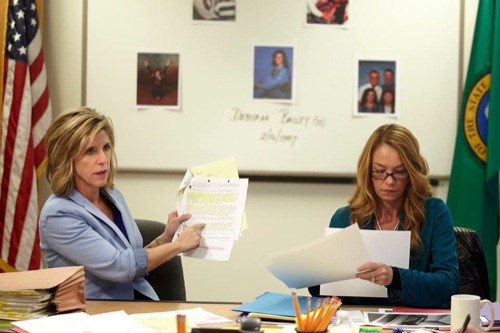 Tonight on TNT Cold Justice continues with an all new Friday January 16, season 3 episode 2 called, “Miss Congeniality” and we have your weekly recap below. On tonight’s episode investigating the slaying of a young mother who was found shot to death in her car.

On the last episode, real-life crime series Cold Justice followed former prosecutor Kelly Siegler and former crime-scene investigator Yolanda McClary as they dug into small-town murder cases that had lingered for years without answers or justice. In 2004, someone crept inside a 25-year old’s bedroom window while she was sleeping and brutally stabbed her to death. In the season three premiere, Siegler and McClary headed to Pocatello, Id., to search for clues and suspects including one who may had been a repeat offender. Did you watch the last episode? If you missed it, we have a full and detailed recap right here for you.

On tonight’s episode as per the TNT synopsis, “real-life crime series Cold Justice follows former prosecutor Kelly Siegler and former crime-scene investigator Yolanda McClary as they dig into small-town murder cases that have lingered for years without answers or justice. In 1997, a young mother of three was found shot to death in her car that was pulled over on the side of a highway. In this episode, Kelly and Yolanda head to Yakima County, Wash., and are faced with the difficult task of finding a killer who seemed to disappear under the dark cover of night.”

On tonight’s all new episode of “Cold Justice”, Kelly and Yolanda are back on the road and this time they’re heading Yakima County Washington. 17 years ago, Yakima native Deborah Bailey was found murdered in her car left out by the side of the road and unfortunately her family never got the justice they deserved. Because, while at the time no arrests were made, there’s only ever been one chief suspect in Debbie’s murder – her husband Barry.

So now the ladies of Cold Justice are going to reopen Debbie’s case to see if Barry was as guilty as everyone thought or if all along he’s been an innocent man?

The criminal justice system clearly states innocent until proven guilty however there’s a reason Barry Bailey was considered the primary suspect for nearly two decades. And it’s a s simple as this – the evidence against him was and is compelling. Not only did Barry’s “version” of his wife not match up with everyone else’s description of a mild mannered good mother but after he had discovered she was missing – he contacted a friend at the 911 responder’s office instead of calling the emergency services directly.

And there’s also Barry’s alibi. According to him and his two young children with Debbie, the whole family was watching TV when Barry fell asleep on the couch. Afterwards, Debbie put the kids to sleep and later when Barry woke up after 1 am – he claims he couldn’t find his wife.

Yet his cell phone records show he had a conversation with his friend Tim McKinney. Now Tim was brought in for questioning and he didn’t try to cover up the phone call. He said he spoke to Barry and once Barry saw Tim’s written statement – his story changed.

And then there were the polygraph’s results. Tim failed the polygraph (including the question if he knew who killed Debbie) but sadly that was inadmissible in court because how unreliable these things can tend to be. So the results of the test were benched.

But that didn’t mean the police were just going to let Barry off the hook. After the case went cold, they refused to hand over Debbie’s old car to Barry. They didn’t want to let go of such a crucial piece of evidence.During the investigation, Barry was asked to recreate the scene of Debbie’s murder and while he used the same old story of her meeting up with her drug dealer – most of what detailed is what actually had occurred. On the other hand, though, the drug dealer never panned out.

During the investigation, Barry was asked to recreate the scene of Debbie’s murder and while he used the same old story of her meeting up with her drug dealer – most of what detailed is what actually had occurred. On the other hand, though, the drug dealer never panned out.

No one that knew Debbie said she was addicted to drugs. They admit she dabbled but not even one of the town’s drug dealers thought Debbie had a problem. He said Barry was the one that had a problem. Barry dealt in drugs and used drugs.

Though, when the cops paid him a visit, he swore he was never involved with that kind of lifestyle. Yet he’s the one that had a record and he reportedly told more than one person he would kill Debbie before he gave her half what they own.

You see Barry had been married before and in the divorce they each got 50/50. But Barry would go on to say he was cheated in the divorce. And that he would never something like that happen to him again.

So that’s one possible case of motive. Meanwhile another case would be is that Debbie probably knew too much about her husband. As it turns out Barry never let go of his shady dealings and if Debbie had spoken up or was willing to speak up against him – Barry would have been done for.

Hence there was plenty of reason why Barry would seek to kills his wife rather than divorce her. But despite testimony, there isn’t any concrete/definitive proof Barry did it.

He told someone he had gotten rid of the gun and no one can find Tim McKinney. Tim disappeared and Barry is refusing to confess. So the case the ladies built up is based on unsupported alibis, no murder weapon, and only third-party testimonies. And at first this was not enough to even convince the prosecutor’s office.

But the prosecutor later changed their minds about charging Barry. They didn’t to risk it in order to put him in jail for the murder of his wife!