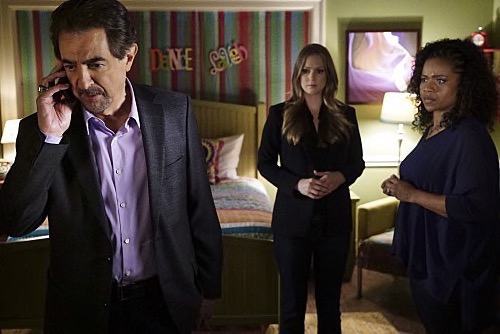 Tonight on CBS Criminal Minds starring Thomas Gibson and Shemar Moore continues with an all new Wednesday May 6, season 10 finale called “The Hunt,” and we have your weekly recap below. On tonight’s episode Season 10 ends with Kate’s niece and her niece’s best friend being kidnapped, possibly by an online predator engaged in sex trafficking who poses as a teen boy.

On the last episode, when three people implicated in murders claim they were attacked by a “clawed shadow monster” at the moment each crime occurred, the BAU searched for an UnSub who was controlling their minds. Also, the search for the culprit put one of the team in jeopardy. Series star Matthew Gray Gubler directed the episode. Guest stars include Bodhi Elfman as mathematician Peter Lewis, and Thad Luckinbill as Larry Merrin and Kiko Ellsworth as Daniel Karras, two of the people implicated in the murders. Did you watch last week’s episode? If you missed it we have a full and detailed recap right here for you.

On tonight’s episode as per the CBS synopsis, “When Kate’s niece Meg and her best friend are kidnapped, the BAU suspects an online predator engaged in sex trafficking. Greg Grunberg (“Alias,” “Heroes”) returns as Kate’s husband, Chris Callahan.”

Kate and her niece Meg have a rule. If the teenager is ever in danger then she was told to text her adoptive mother the word “pepper”. And after she got into a car with a stranger – the girl definitely felt something was off. So she managed to text “pepp”.

She probably would have gone on to text the full word but there was a fourth person in the car that Meg and her friend hadn’t known about. So both girls were knocked out before either could put up a fight or call out for help. But that text Meg sent was just enough to worry Kate.

Kate instantly checked in with Markayla’s mother and when other woman said she thought her daughter was over at Kate’s – that sent off alarms.

Kate had Garcia track Meg’s phone and so they found footage of when both girls were last seen. And, unfortunately, Kate saw for herself how both girls innocently went into a car with a stranger. Reid had said that they were probably targeted online and so that’s how the kidnappers were able to gain the girls’ trust but Kate still felt guilty.

For a profiler, she was beaten herself for not having seen the signs and there were warning signs. Like the time Meg and Markayla were stood up for a date with two guys from school. And also Kate did notice that Meg’s behavior had changed recently. Though at the time she thought it was because of the new baby.

The same baby that Kate is putting a lot of stress on. After the BAU formed a task force to look into both girls – Kate nearly collapsed.

She was close to her due date and was actually about to go on maternity leave when this whole mess began. So Kate’s doctor ordered bed rest. And her team wasn’t going to allow her to break it.

However Kate didn’t just walk away from the case. In fact she proved to be helpful because once the BAU found who the girls were talking to online – she told them she knew the picture. “Bobby” had been used in a voluntary missing case. Some woman met the guy of her dreams online and she soon disappeared only to bee found a couple of months later having died in a freak car accident.

And as it turns out, that woman wasn’t alone. There were more voluntary missing cases and most of them had died in some “accident” or another after a few months.

Someone had apparently been kidnapping young women and girls for a while now. And more often than not these same kidnappers would go on to sell their victims to serial killers. So Kate is hating herself. She was investigating a possible connection to a mysterious ring of kidnappers to the Torso murders that the team had finished up earlier. And that means whoever took Meg knew Kate was close to finding them.

The abduction was personal. And the kidnapper wanted to make a point by targeting someone that Kate loved. So he grabbed Meg and her friend was just an added bonus.

Though Meg wasn’t just anyone. She was Kate’s daughter and Kate had told her enough stories to made Meg somewhat prepared if she ever found herself in a bad situation. So she devised a plan to get her friend free. And that way Markayla could get help.

And that’s what Markayla did.

She broke free and found help from a kind woman whose door she knocked on. Thus Markayla was able to give the team a description of the people that took them. And that combined with the women that matched the kidnappers’ profile was what helped the feds catch up to their UnSub.

And later when the BAU came bursting through his front door – the UnSub laughed. By then he knew he already hurt Kate like no one else could have.

The BAU found Andy when they were looking into the women that mysteriously died and built a profile for one of the murders. And, well, there is no honor among murderers and kidnappers. So a different UnSub ultimately led them to Andy and his female partner.

Now Andy wasn’t going to talk but his partner on the other hand was open to helping. Especially after she found out that Andy had murdered their son when the young man accidentally let Markayla get away. So it was she that led the BAU into finding Meg and every one of Andy’s clients.

And Kate’s friends managed to get to Meg before her UnSub could hurt her but that close call was simply too much. Kate realized she needed time off and so she handed Hotch her papers.

When she did that, he said she could always come back and maybe she will one day. Though at the moment she wants to spend time with her family. And, in other news, who knows when JJ will begin her own maternity leave.

So Hotch better start looking at replacements for two.