Crispin Freeman Does MomoCon in Atlanta 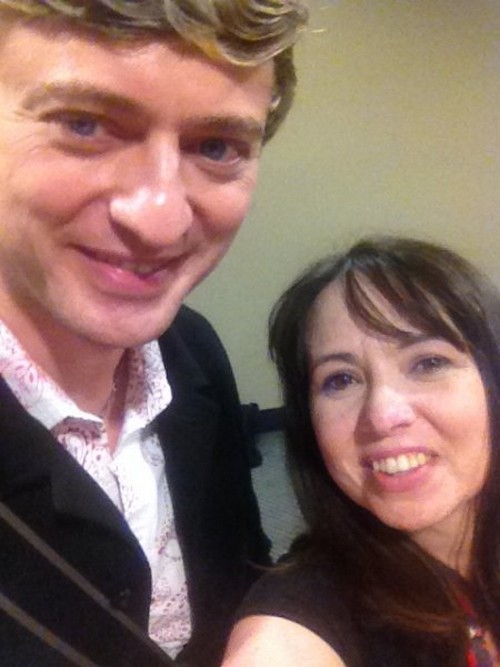 Crispin Freeman is one of the most famous voice actors in the known world. With a background in opera and a degree from Columbia in mythology, Freeman is a booming voice emitting from a towering body topped with a stellar brain. An admitted introvert, Freeman is happiest behind the mic than out in public and was appropriately demure when he sat on panels and then in a press conference with me and other media members at #MomoCon, the Southeast’s biggest anime and gaming fest.

MomoCon was held at the Georgia World Congress Center from Friday May 29th through Sunday May 31st 2015. Nearly 68,000 anime, comic book, cosplay and gaming fans turned up for the event and Crispin Freeman was a special guest and sat at a couple of panels and autograph sessions. Crispin is known for both anime and animated work including Cowboy Bebop, Helsing, Digimon, Star Wars: Knights of the Old Republic (video game), and Ice Age the Meltdown.

My personal favorite of Crispin Freeman’s is Howl’s Moving Castle – if you don’t remember, Freeman was Prince Turnip in Hayao Miyazaki’s critically acclaimed film. Crispin Freeman sat down for a press session with Celeb Dirty Laundry and some other media outlets during one of his breaks and answered questions at the early summer Atlanta event.

He spoke about gender disparity in anime and video games and said it was getting better but admitted that women are still not on equal footing. Freeman was also asked how he got started in voice acting and referred people to his podcast specifically on voice acting at www.CrispinFreeman.com. He says he was always a fan of Japanese animation and was able to make a contact and get an audition.

He was working in theater in New York while doing voice work on the side then decided to move to full time voice work as his passion. Interestingly, Crispin said one of the things that’s odd about doing voice work is that you don’t always know the project you’re working on or even the character name because video games are often cloaked in secrecy so it makes it more of a challenge.

Freeman said he’s worked on some of the top games but had no idea at the time that’s what he was doing. He said he wanted to become an actor because he was a shy child and his family was involved in the opera and he spent a lot of time backstage. He says it’s like a city back there and he fell in love with the idea that you could go inside and come down as Henry the Eighth.

#MomoCon is back again in 2016 from May 26th through May 29th again at the Georgia World Congress Center. Tickets are very affordable – and this is a family friendly con. All events before 8 pm are rated G or PG so feel free to bring the kids.

Also be sure to check out Atlanta’s other major geek fest #DragonCon which is every Labor Day weekend in downtown Atlanta. There’s a parade Saturday that’s the largest in the Southeast and features themed segments – you’ll see marching Doctor Whos, a legion of gladiators, Ghostbusters, Borgs and Klingons, Stormtroopers and more.

DragonCon’s featured guests this year include the stars of Arrow, Lost Girl, Haven, The Flash, Once Upon a Time, True Blood, Sleepy Hollow, Supernatural, Grimm and more. To buy tickets to DragonCon, go to www.DragonCon.org.