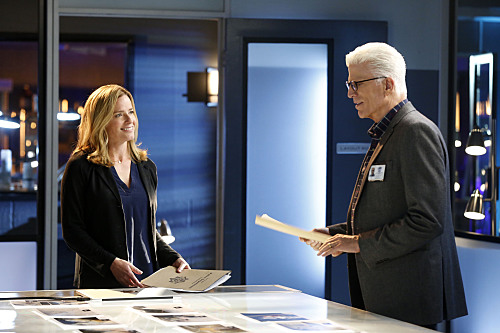 Tonight on CBS CSI: Crime Scene Investigation returns with an all new Tuesday January 27, season 15 episode 16 called, “The Last Ride” and we have your weekly recap below. On tonight’s episode, the CSIs investigate a death.

On the last episode, the CSI team investigated a homicide at a convention for people who collect macabre murder memorabilia. Did you watch the last episode? If you missed it, we have a full and detailed recap right here for you.

On tonight’s episode as per the CBS synopsis, “the CSI team investigates a death involving a vintage Rolls Royce and a chrome-covered victim.”

A woman’s dead body was found dumped and covered in silver paint. And later, after an autopsy had been performed, it was revealed the paint is what actually killed her. Apparently someone had drowned her in it.

So could this to her and why? At first the team was just throwing around theories when they said she was probably someone’s toy. Yet, once they came to find out about their victim, that theory of theirs stated to look plausible. For, it seems Eva Montrose was a tad wild while she was alive.

Eva’s parents can recall shady drug dealers stopping by their place and their daughter always had an excuse at hand. So Eva was in fact not angelic. However her autopsy also revealed the paint she was drowned was a special order. Consequently, that paint matches a very rare and old car. Meaning whoever owns the car can be considered, at the very most, a person of interest.

And funnily enough, Eva’s ex-boyfriend just happens to be a co-owner of such a car.

Eva got mixed up with the son of a notorious Las Vegas mobster and recently the two of them had split up. But the ex, an investment banker, swears he didn’t killer her. And that he wasn’t the only one with access to the car. His shares custody of an impressive car collection with his younger brother who, if they’re being honest, never did approve of women his brother kept on dating.

Though, Sanders is quick to say he doesn’t think either of the brothers were involved in the murder. For one, the crime scene was too messy. The CSI team found plenty of Eva’s Blood lying around in the brothers’ garage. And if it had been them – why didn’t they clean up after themselves.

Details like that doesn’t make sense when Eva’s body was dumped miles away!

Plus, there was magnet for a pizza parlour found at the scene and Hodges remembered that sometimes that used by car appraiser whenever they’re checking out a car. So they hunted down the appraiser the Derosa Brothers had hired. And in the beginning, he lied to Sarah during their interview. He had told her he hadn’t been in that garage in over two months and Sara knew that was a lie because the place had been swept clean a mere few days ago.

So she gave him a second chance to answer her questions and this time she made sure he knew how serious she was. And that’s when he told her he had been hired by Carlo Derosa. The older brother wanted a second appraisal seeing as he had buyer lined up.

Which is strange because he wouldn’t have been able to have sold the car without his brother Aron’s permission!

Hence, this murder was beginning to look like an inside job gone wrong. Carlo probably had Eva break into the garage in order to steal from out under his brother and then something happened. Then Aron, it seems, got wind of what was going on and stole the car from his brother.

However, when they found both Aron and the car, he hadn’t known it was part of the crime scene. He had merely taken it so that his brother didn’t sell off some of his most cherished memories he had with his father in that car.

Their father, known as “Vice”, was murdered when the brothers were kids. And apparently before he died he used to take Aron out for late night drives. In fact, on the night he was murdered alongside his mistress, their father had taken Aron out to get ice cream. And Aron had been waiting for his father as the man was dying somewhere else.

So Aron didn’t want to sell the car. He felt it was too valuable and refuse to be parted from it under any circumstances. His brother on the other hand only cared about the bottom line.

Carlo’s buyer that he had lined up turned out to be Eva’s mother. And the reason she was in that garage is that she was going to steal that car but not for Carlo. It was for her mother who in turn had a buyer lined up in Dubai!

Thus, to get the car out of the garage, Eva had enlisted the help of a certain appraiser to help her move it. But she ended up relying on the wrong man. Because after she brought this guy – he killed her. Though not for the car.

Bixler, the appraiser, was a young man back when Vice Derosa was murdered and so he had a few mistakes when he carried out the hit. He had sadly left a stray bullet behind and when the opportunity came – he did his best to retrieve it. Yet Eva had interrupted him. She came back to the garage after she had promise to be as far away from the scene as possible.

And Bixler killed her just so he could cover up murdering a mobster that had been sleeping with his fiancée on the side some twenty years ago.

The team pinned him at the scene after they found his DNA on the headrest Bixler had tried to switch out (you know to cover up the previous murder) and after that he just confessed to everything else. His crimes appeared to have been weighing on him this whole time.

And as for that infamous car, the brother donated it a Mobster museum. They felt it was best to meet in the middle and this way their father’s death remains a part of history.