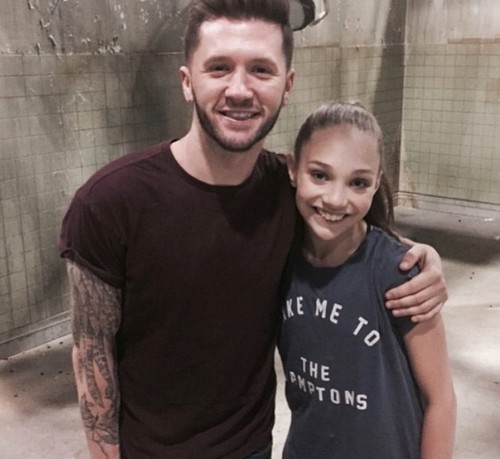 Dance Moms Star Maddie Ziegler has recently been praised for her incredible dance skills, but now the young reality show star will be adding “actress” to her resume. Maddie Ziegler will be guest starring on an episode of the ABC Family hit series Pretty Little Liars in the upcoming season, and fans are ecstatic to see her on the show.

Actress Troian Bellisario, known for playing Spencer Hastings on Pretty Little Liars, recently took to Instagram and posted a photo of herself accompanied by Maddie on the set of the show. The caption along with the photo read, “Number 1 reason to come into work today. I get to be a creepiest with the insanely talented and awesome Maddie Ziegler. I know I know you’re so jealous.”

Maddie also shared her excitement on Instagram saying, “It’s a dream come true that I got to work with the most incredible person! And yes I know, we’re haunting.” The photo shows Maddie and Troian standing alone in an abandoned bathroom. The scene is quite eerie, and has fans wondering what exactly could be in store for season six.

Ziegler, who first rose to fame on the Life Time reality series Dance Moms, has been growing in her fame each and every day. Singer, Sia, recently began working with Maddie for her various music videos. Maddie Ziegler can be seen in Sia’s music videos for “Chandelier,” “Big Girl’s Cry,” and “Elastic Heart.” Sia has said that Maddie is one of the most talented actresses she has come across, and believes that no one can portray the emotions that she wishes to show through he music video, better than Maddie can.

Maddie has even starred alongside Shia LeBouf in the “Elastic Heart,” music video. This will surely give Maddie Ziegler the acting experience she needs to take part in Pretty Little Liars.

If you are one of the countless fans of Pretty Little Liars, the show will return on Tuesday, June 2. Until then, we want to hear your thoughts. What do you think Maddie’s role will be on PLL? Let u know in the comments below.