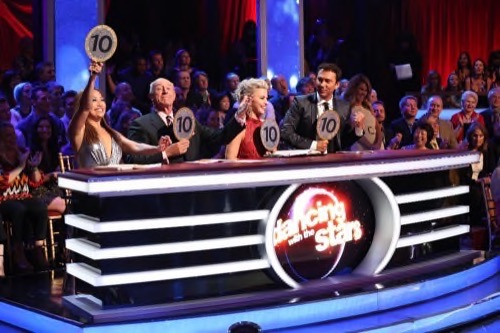 Tonight on ABC Dancing With The Stars 2015 airs with an all new Tuesday May 5, season 20 episode 9 and we have your weekly recap below. On tonight’s episode there will be a double elimination and special guest performances..

On the last episode, the six remaining couples on “Dancing with the Stars” danced to a song and dance style voted on by viewers for America had creative control of the couples’ first dance, asking fans throughout the week via Twitter, Facebook and Instagram for their input on wardrobe, set design and visual effects. Each couple performed two full routines including an individual original dance and a trio dance. For the trio dance, couples had the opportunity to pick an eliminated pro or troupe member to enhance their performance and highlight the strengths of each star. The trio dance styles included the Jive, Paso Doble, Samba and Salsa. At the end of the night, two couples were eliminated at the end of the night and four couples will move on to the semi-finals. Did you watch the last season finale? If you missed it, we have a full and detailed recap right here for you.

On tonight’s episode as per the ABC synopsis, “a double elimination occurs in the eighth-round results show. Also: Josh Groban and Carly Rae Jepsen perform; Maddie Ziegler is featured in a dance; and Kenny Mayne, Jerry Rice and Len Goodman host Dance Center.”

Tonight’s episode begins now – Refresh Page often to get the most current updates!!

Tonight’s episode of Dancing With The Stars kicks off with hosts Tom Bergeron and Erin Andrews taking the stage, they reveal the scoreboard for this week based on the judges’ scores:

Now, it is time for the Dancing With The Stars judges to pick their encore dance of the night, Len Goodman announces that without a doubt they want to see Rumer and Val perform again. Now it’s time for Dance Center – Jerry Rice shares a clip of Kym Johnson and Robert Herjavec in rehearsal – it’s been rumored for months that the couple has been dating, and that appears to be the case. In the clip Robert and Kym are hugging and kissing each other. Robert tells Kym that even if they are eliminated, “it would all be worth it baby.”

Carly Rae Jeppson takes the Dancing With The Stars stage next and performs her new hit single “I Really Like You.” After Carly’s performance it is time for the first round of eliminations. Noah & Sharna and Kym Johnson and Robert are up first. The host announces that Robert Herjavec and Kym are officially eliminated. Noah and Sharna are moving on to the semi-finals. Before they make their grand exit, tom and Erin interview them. Tom jokes that Robert may not have one the Mirror Ball Trophy, but he won someone’s heart. Robert still refuses to confirm or deny whether he or Kym are dating.

The hilarious guys at Dance Center share a few more clips of Sharna kicking out her partner Noah’s tooth, and a super awkward interview with Nastia Liukin. Jerry Rice also cracks jokes about a segment with Rumer Willis in which she confesses that she had a rough childhood because kids made fun of the way that she looked and called her “Mr. Potato Head.” Next, a dance company called “Travis Wall & Shaping Sound” takes the Dancing With The Stars stage and performs for the live audience.

Now, it’s time for more results from America’s votes. Nastia & Derek are officially safe and are moving on to the semi-finals. That means that either Chris & Witney or Riker & Allison are in danger of being eliminated tonight. Backstage Erin Andrews interviews Noah and Sharna, Noah jokes that he never thought he would make it this far and he is going to go buy himself a motorcycle to treat himself. Before we learn who will be eliminated and sent home tonight, Josh Groban takes the stage to sing “Over the Rainbow” with special guest dancer Maddie Ziegler from Lifetime’s “Dance Moms.”

Now, it is time for the second round of eliminations tonight, according to America’s votes – Riker and Allison are going to semi-finals and Chris Soules and Witney Carson are eliminated and going home. Chris gets choked up and says that he is forever grateful for his time on the show and thanks them for the opportunity. Witney raves that she loves Chris and thanks him for everything.