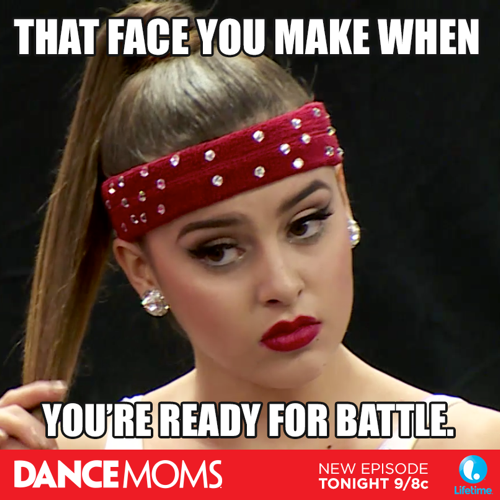 Tonight on Lifetime Abby Lee Miller’s Dance Moms continues with an all new Tuesday March 31, season 5 episode 13 called, “Mackenzie’s Time to Shine” and we have your weekly recap below. On tonight’s episode, it’s the last week before the ALDC tries to make another go of it in Los Angeles and Maddie is away again, this time dancing on Saturday Night Live.

On the last episode, the media was going crazy for Maddie’s second music video with Sia so Abby had all of the girls doing duets in her honor. Not everyone was a fan of Maddie’s latest work, especially Cathy, who has assembled a new Candy Apple team made up of dancers who had all worked with Abby and were ready to seek vengeance on the dance floor. Did you watch the episode? If you missed it, we have a full and detailed recap right here for you.

On tonight’s episode as per the Lifetime synopsis, “it’s the last week before the ALDC tries to make another go of it in Los Angeles and Maddie is away again, this time dancing on Saturday Night Live. With her sister gone, Mackenzie has the chance to remind everyone she is more than just Maddie’s little sister. Up against Cathy’s new premium Candy Apples team, Abby decides to push the envelope with a sassy and funky routine as Cathy is still reeling from their loss the week before. Will this risky routine be enough to beat Cathy again?”

Tonight’s episode is going to be another drama packed evening, which you won’t want to miss. So be sure to tune in for our live coverage of Lifetime’s Dance Mom’s Season 5 episode 13 – tonight at 9 PM EST! While you wait for our recap, hit the comments and let us know how excited you are about this new episode of Dance Moms tonight!

#DanceMoms starts with the moms streaming in and the kids talking about Maddie being out all week to do SNL. Melissa wants to be with her in New York but says she has to be in Pittsburgh for the team and Mackenzie. Abby tells the girls it’s their last week before heading back to LA. She tells them Maddie is rehearsing Saturday Night Live. Abby says she’d like to be there too. She congratulates the team on a clean sweep at the last competition. Abby says the group routine was good and says they beat Cathy into 3rd place.

Abby does pyramid and says it’s a little different today. She tells JoJo and Kendall to come up and hands them their head shots. She says there are at the bottom for taking 3rd. Mackenzie and Nia come get their pictures. Abby says Mackenzie’s dancing was juvenile but Nia has grown and is using more upper body. She talks about Nia’s flaws then how she draws away from them. Holly isn’t happy with the dig that came with the compliment.

Kalani is at top of pyramid alone since Maddie is out of town. Abby says their duet was spectacular. Kira says the other moms need to follow her example and keep their head down. Abby says they are headed to another competition and says the Rotten Apples will be there too. Abby says Cathy is out for blood and finally has some good dancers since she picked up Abby’s scraps. Abby gives JoJo a solo and says Mackenzie gets the other solo.

She wants JoJo to up her game by putting her up against Mackenzie. Abby says she hates to do a lyrical number without Maddie. She says they’re doing jazz with a Spice Girls number. Over at Candy Apples, Cathy greets moms and dancers. She says losing with a new team was not what she had in mind. Cathy says they have a good team to use her choreography and says they’re all good dancers. She also tells them that Maddie won’t be there and they cheer.

Cathy is doing a group number called Stand Up. Back at ALDC, Abby is putting the girls through their Spice Girls number. She says this number is better for LA. Jill says Abby hates for anyone to lose but especially for Maddie to lose and says Abby is experimenting since Maddie isn’t there. Jill doubts the Spice Girls number is enough to win. Jess agrees. Melissa says they complain when there’s lyrical and when there’s not. Melissa says last time it was just nerves.

Holly says they can only go up. Abby tells the girls they’re facing off against Candy Apples without Maddie. Back at Candy Apples, Cathy says Abby’s team has consistency of beautiful girls with clean lines and has to play on that same level. She says she needs to make it look just like Abby’s team. That seems stalker and desperate right? She can only beat Abby if she’s channeling (aka copying) Abby? Cathy says the new team is really good and says she wouldn’t say “ugh, she’s the Nia of my group.”

Nice – she just use Nia’s name as an insult. Abby works with JoJo on her number and says to strut and be fancy. Jess says she loves the solo. Melissa says it’s really JoJo. Jill asks what Jess is doing behind their backs to get these great solos. Jess says Abby is more comfortable putting JoJo at risk. Jess says this is JoJo’s first solo as an official team member. Jill says Mackenzie is Abby’s baby and her favorite after Maddie and says JoJo is going against Abby’s baby.

Mackenzie’s routine is acrobatic. They tell Mackenzie that Maddie would have gotten this hours ago. Melissa says Mackenzie knows who she is and Jess says everyone associates her with Maddie. Melissa says MackZ had many number ones on iTunes. Holly asks if it bothers her that Abby is tearing down Mackenzie and comparing her to her big sister. They push Melissa to confront Abby but she says there’s nothing she can do it. Jess thinks Melissa is caving rather than standing up to Abby.

Mackenzie messes up in dress rehearsal and Melissa has to tell her to keep going and not cry. Abby is not pleased and says she forgot several elements. Mackenzie says she’s thinking too much and Abby says maybe not thinking enough then says maybe the home schooling thing is not working. Melissa says Mackenzie is smarter educationally than Maddie. Mackenzie says it’s stressful with Abby yelling and comparing her to her sister all the time.

Jill asks who knows the Spice Girls and JoJo rattles them off. Holly explains how the group came into being. Mackenzie asks what Ginger is besides a redhead. Melissa shows them a photo of Maddie onstage at SNL. Mackenzie says she feels great there without Maddie and her mom is shocked. Jill says it would be great for Mackenzie to get a win this week without her sister. Abby goes over the attitude for the girls number.

The moms like the number. Kira says this number is what they need for LA. Jill says the number needs to be good because of Cathy but isn’t sure this one is competitive. Abby reminds them it’s the last competition before LA without Maddie. She says they have everyone in Ohio plus the wicked witch Cathy. She says her girls are good and some better than them. On competition day, they head across the river. Crowds of screaming girls greet Abby who smiles and waves.

Jill says they need a win heading into LA. Then the Candy Apples are generating cheers for themselves and chanting Cathy’s name, but it pales in comparison to Abby’s fan reaction. Cathy and her moms barge in to be loud. Jill tells the other moms to go take care of their own business. Abby says no one cares about Cathy’s crap but her moms are feeding this middle school crap. Abby says her agenda is to win. Jess calls them never-be’s and tells them to leave. They finally leave. Melissa says they’re a distraction they don’t need.

Melissa talks to Mackenzie to build her confidence. Jess says Abby has spent so much time with Mackenzie she thinks she wants her to win. But Jess thinks JoJo can do it. Abby says she wants to get on the plane to LA tomorrow victorious. Melissa says with Maddie gone, Mackenzie needs to shine. Her number is cute. Abby says Mackenzie can do it all but wonders if she can wow the judges. Jess says Mackenzie does a lot of tricks while JoJo does more movements.

Mackenzie says this was only her second while JoJo has had like six. Abby says JoJo has to be dynamic and make the judges put their pencils down. Abby says JoJo was strong and intense and danced well. Abby says Mackenzie is trained well but JoJo is fancy and she wonders if Mackenzie will ever be fancy enough. Melissa poo-poos JoJo’s really cool solo. Cathy thinks she really has something and tells her girls they have to have a win and there’s no room for error.

Maddie calls on video chat and checks out the group costumes. Melissa says they look adorable in their outfits. Abby says if they don’t win without Maddie it says to the whole world that it is her. Jill says Maddie is gone and they’re competing against the Candy Apples with a non-lyrical routine. The girls pump themselves up and say they can win without Maddie. The group number is really cool and very different for them. Jill says there were amazing and good enough to win.

The all-new Candy Apples try to psych themselves up for their number. Abby says she practically hand-picked Cathy’s team and says she can’t believe those moms went with Cathy when Abby may have called them at some point. Holly says the dance looked familiar and she recognized a bunch of those moves from their past numbers. But she has to admit they were great. It’s awards time. First up are solos. Mackenzie takes second place and JoJo takes first place.

Abby says that’s no surprise to her because JoJo is hungry and trying to prove herself while Mackenzie is a legacy who doesn’t have to work that hard. Jess is thrilled that JoJo beat Mackenzie and says no one can deny her talent. Next up is groups. Jill says it’s anyone’s game. ALDA takes second in groups. Cathy’s new team takes first place. Abby says coming in second is bad enough but coming in second the Rotten Apples is even worse especially on the way to LA.

Cathy says the ALDC faces were on the ground. Cathy says she has a fabulous fun thing to do. She says they need to go share their victory with Abby and shows them a cake with Abby’s face on it screaming. Abby asks the girls if they lost because of Maddie. Holly says they just need to leave and avoid confrontations. But then Cathy comes in with the cake and offers to stab the fork into the eyes of her cake. Abby gestures to the one mom Liza to have her daughter’s ears fixed.

Liza chases her down the hall angry. Jill thinks Abby was being horrible and says they poked a bear and Abby let them have it. Liza rants and Cathy calls her a horse. The ALDC moms tell her not to be upset and Liza says she was humiliated and Cathy says she’s right there with her.