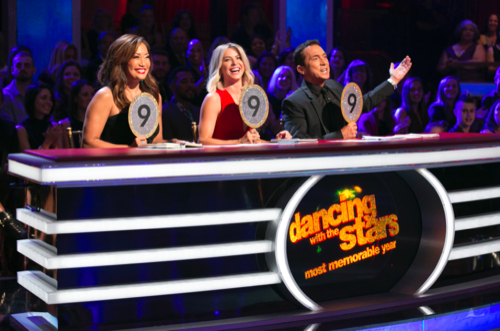 Tonight on ABC Dancing With The Stars 2015 airs with an all new Monday October 12, season 21 episode 5 and we have your weekly week 5 recap below. On tonight’s episode, an elimination occurs after the fifth week of performances, during which the dance pairings switched.

On the last episode, each celebrity set out to leave a lasting impression with their dances as they commemorated their most memorable year on “Dancing with the Stars.” Each couple danced to a song of the celebrity’s choosing that encompassed a memorable time, or truly incredible experience in their life. These heartfelt performances showcase d some of the most exciting choreography and emotionally powerful routines of the season yet.  At the end of evening, sadly Gary Busey was eliminated from the ballroom competition. Did you watch the last episode? If you missed it we have a full and detailed recap, right here for you.

On tonight’s episode as per the ABC synopsis, “fan engagement through social media has helped to switch up the nine remaining couples. Celebrities and professional dancers switch partners. Season 18 Mirrorball-winner Maksim Chmerkovskiy will guest judge alongside Julianne Hough, Carrie Ann Inaba and Bruno Tonioli. The pressure is on for the pro dancers to choreograph new dances with new partners. Each couple will dance to a different style of dance, including the Jive, Cha Cha and Tango. Celebrities will perform one routine with their “switch up” partner and return to their original dance partners the following week.”

Judges Comments: Maksim: “This is hard, you are an amazing performer. Everything you did separately was great, but together there was a disconnect. You had very little time to get used to each other.” Bruno: “I loved it, you took center stage but when you got in hold there were balance issues and you missed some steps, maybe you were not used to the speed of the dance.” Carrie Ann: “Out of all the women left in this competition, you own it. There was a bit of disconnect, but you were great.” Julianne: “I give you props, the dance is twice is long as in previous weeks, you need to get grounded, you were to erratic.”

Judges Comments: Bruno: “You are the ideal price charming, hard routine, it is easy to look messy. You were jumpy, you were trying, but it looked kangarooish.” Carrie Ann: “I disagree, I liked it but you just need to watch your chin.” Julianne: “I agree with Carrie Ann, I liked that it was youthful, charming and graceful. Just work on your arms, start from the bottom and go to the top.” Maksim: “There were a lot of steps but to me there was not enough Viennese Waltz, Bruno was right. Your facial expressions didn’t show your youthfulness, it just showed that you didn’t want to mess up.”

Judges Comments: Carrie Ann: “You are a naughty silver fox, that was your best dance ever.” Julianne: “Mark brought the milk and you brought the cookies. You go into character.” Maksim: “This was a lot of fun, I liked it, I am looking at you and see these toned legs so I feel like you could have done more Jive.” Mark: “Did you spike the milk? The bad side you did the whole dance flat, you need to be on your toes.”

Judges Comments: Julianne: “I think we all just witnessed something happening on the dance floor and it’s ok to show that you enjoyed it. I know it’s not natural to perform with your face, practice.” Maksim: “I’m going to continue with Julianne’s thoughts, I didn’t think you were going to do good, but you had great lines. You can let your emotion be a part of the dance.” Bruno: “Very nurturing and very caring, technically the feet skim the floor, you need to caress it.” Carrie Ann: There were was no time for her thoughts, but she gave it a thumbs up!

Judges Comments: Maksim: “I loved it, the dance of the night. There was so much positiveness coming out of you, I smiled the entire time.” Bruno: “You lift my spirits like a bright summer day. One tiny thing, watch your shoulders.” Carrie Ann: “You took yourself to a whole new level tonight.” Julianne: “Regardless of who you dance with, you are Bindi and you are a ray of sunshine.”

Judges Comments: Bruno: “That was not a Quickstep, that was turbo charged with content; it all glued together magnificently.” Carrie Ann: “First of all I want to thank you because to me it doesn’t get any better than that.” Julianne: “That was exactly what you needed Carlos, you owned it.” Maksim: “It was not a great Quickstep, it was an amazing Quickstep.”

Judges Comments: Carrie Ann: (gives a standing ovation) “It’s the half way point and the stakes are so high, that was incredible, it was revolution.” Julianne: “I feel like every week we have seen this positive girl and we just want to break it open. There was an element of authenticity.” Maksim: “Leading up this I looked at your past numbers and I feel like you are too much in your own head, let it out. Very well done.” Bruno: “It was a victory!”

Judges Comments: Julianne: “Musicality, the footwork..nailed it! You felt that and I felt that and I think everyone else in this room felt that.” Maksim: “I got to say, Sharna I love you for this, this was great, the performance value was through the roof, this was awesome.” Bruno: “Steamy like an erupting volcano. You got it inside you there were just a few footwork issues.” Carrie Ann: “Last week I was like what was happening, you were looking like Peewee Herman. This week it was like watching James Dean, you were in control and you were in your element, it was hot.”

Judges Comments: Maksim: “I am a big fan of authentic dances, you are clearly a great performer but this for me is not my cup of tea. It’s not my type of Paso, you have many ore weeks to go.” Bruno: “You are still the leader of the pack, you had a wonderful rock and roll feel but your hips sometimes were too far back.” Carrie Ann: “The best thing about you is found your way and you stayed in the zone, I loved it. Julianne: “There were times that you were so committed that it went too far.”