Dancing With the Stars 2015 Recap – Who Was Eliminated: Season 21 Episode 10 “Semifinals” 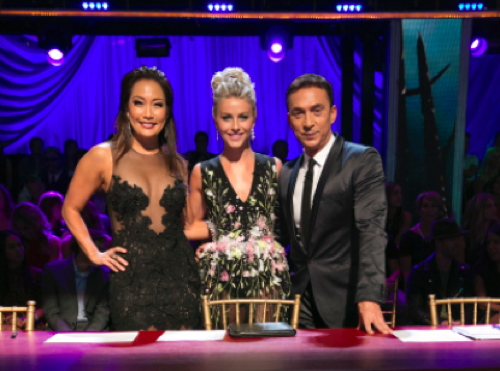 Tonight on ABC Dancing With The Stars 2015 airs with an all new Monday November 16, season 21 episode 10 and we have your weekly recap below. On tonight’s episode, the Semi-finals begins and an elimination occurs after the tenth week of performances, which feature three dances from each of the remaining couples, including a trio dance and a dance-off.

On the last episode, the six remaining “Dancing with the Stars” couples performed two show-stopping dances. For the first routine, the couples revealed a dance style not yet performed this season. Later in the show, they moved into teams to perform a side-by-side dance. Inspiration for the team routines were drawn from each teams’ travels around the country to experience live productions of famous shows such as The Beatles™ LOVE™ by Cirque du Soleil®, Broadway’s Chicago and Royal Caribbean’s “We Will Rock You.” At the end of the night, one couple was eliminated. Did you watch the last episode? If you missed it we have a full and detailed recap, right here for you.

On tonight’s episode as per the ABC synopsis, “four remaining couples advance to the SEMI-FINALS on “Dancing with the Stars.” After Tamar Braxton’s withdrawal from the competition, the pressure is on as each couple fights to make it to the finale. For the first time in “Dancing with the Stars” history, the couples have to dance three dances in the semi-finals: a dance style not yet danced, a trio, and a dance-off challenge, which is a recent edition. For the trio dance, couples picked a dancer to enhance their performance and highlight the strengths of each star. Peta Murgatroyd returns to the Ballroom this season to dance with Nick and Sharna; Karina Smirnoff will dance with Carlos and Witney; Bindi and Derek chose Mark Ballas to be in their trio; and Emma Slater will dance with Alek and Lindsay. For the dance-off challenge, Nick and Bindi will compete against each other, dancing a samba, and Alek and Carlos will face-off, dancing a cha cha. The judges will score the dances, and each couple that wins the dance-off challenge will be awarded three additional points.”

Live from Hollywood the semi-finals of Dancing with the Stars is about to start.  Tonight’s show opens up with a dance from the DWTS troupe choreographed by Mandy Moore.

Tom Bergeron announces that they will update us tonight on Tamar Braxton’s condition.  The first round is starting with the season’s highest scoring dancer.

Judges comments: Julianne: “Yes it is raining happiness that was the perfect song for you.  I would have liked to see more down & dirty but the music called for a more lighter, brighter dance.” Bruno: “I feel like holiday season celebrations have started, right here.  You are so vivacious it is wonderful watching it.  Because you dance so right up it lacked a little side-by-side hip action.”  Carrie Ann: “I thought it was a great way to start the semi-finals.  Be careful you are so clean but sometimes we want to see the edgy come out.”

Judges comments: Bruno: “You capture this majesty like a gliding eagle.  The attention of detail, Lindsay you did a great job.  I cannot believe how far you have come.”  Carrie Ann: “For me this is where you shine your brightest.  It is such an advantage and your performance tonight was the best ever.”  Julianne: “I am so glad you had a ballroom dance tonight.  Tonight there was a difference your performance was there, your technique was there.  It was true dancing. Well done!”

Judges comments: Carrie Ann: “I have mixed feelings about this.  I feel this is the semifinals and it seems each week you lose the connection with Witney.”  Julianne: “I understand what Carrie Ann is saying but you executed it well and I would like to see you dance more.” Bruno: “That Was bloody good and I would love to see it again.  Great muscle control.”

Judge comments: Julianne: “I loved the pep talk in the middle because you have to keep going.  I am so sad that could have been a good dance but there was some foot work issues.  Come back and get out of your head.”  Bruno:  “You looked the part and played the part properly.  Mistakes happen to the best of us.”  Carrie Ann: “I watched you through your journey.  That was a mistake but come back and do what you have to do.”

UPDATE: We take a break from the competition to get an update about Tamar – after last week’s performance Tamara went back to the hospital and found out she had multiple blood clots in both her lungs and she realized she would have to withdraw.  Val thanks everyone for Tamar. We also find out that is why couples are dancing three dances tonight because someone had to withdraw.

Judges comments: Julianne: “Alek it is nice to see you are still waxed.  You definitely sold it but technique was not there.  Carlos your technique was straight on.”  Bruno: “Alek you are really getting the touch, a few issues.”  Carrie Ann: “I thought it was absolutely equal.  You were both polar opposites.”

Judges Comments: Bruno: “Both of you considering the time you had I cannot believe the content.  I have to say hip action Bindi where did it come from?”  Carrie Ann: “Nick I am glad you were not in your head you came back strong.  Bindi I ask for grit and you did grit.”  Julianne: “I loved it you made it a point Bindi to say watch this.  Nick the passion you have shown all season your brought it.

Judges comments: Julianne: “You are like my little Ninja Warrior Princess, the innovation you did not miss a beat.  It was amazing.”  Bruno: “A total work of genius.”  Carrie Ann: “That was not a trio that was a professional contemporary dance company.”

Judges comments: Bruno: “One thing is for sure it takes 3 to tango and you handled it like an expert.  It showed off all your strengths.”  Carrie Ann: “I am impressed you are so sure footed.  You were dynamic.  I was impressed. You lost a bit at the end.”  Julianne: “I think it was smart to bring Emma back.  I felt you lost steam at the end.  I would have liked to see a bit more.”

Judges comments: Carrie Ann: “That was so much fun, I could not take my eyes off you.”  Julianne: “You took over the dance it was sharp and clean.”  Bruno: “You stole the show from the girl.  A great compliment to you girls you made him shine.  It was like watching Charlie Chaplin and Ben Vereen.”

Judges comments: Julianne: “I have to say everything you have to offer all the Nick we have seen from Day 1 was in that dance.  I believe you are a contender.”  Bruno: “That is how you come back with a huge massive hit.  I loved it.”  Carrie Ann: “This is the most solid you have ever been on your feet.  You became someone new tonight!  Backstreet Boy is back.”

Dancing in the finals:

Because Tamar Withdrew from the competition there is NO elimination and everyone dances in the finale!