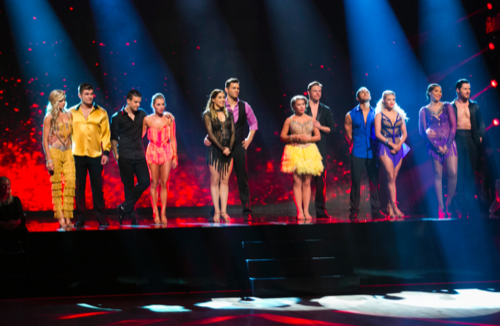 Tonight on ABC Dancing With The Stars 2015 airs with an all new Monday November 9, season 21 episode 9 and we have your weekly recap below. On tonight’s episode, an elimination occurs after the ninth week of performances, featuring dances the stars have not yet performed. Later, the couples pair up for team dances inspired by live productions such as Broadway’s “Chicago,” with each dance showcasing two couples.

On the last episode, the “Dancing with the Stars” celebrities paid tribute to influential figures in their lives. The dance styles included Argentine Tango, Foxtrot, Contemporary, Salsa, Paso Doble and the Viennese Waltz. For the first time this season, the couple with the highest score from their solo dance was granted immunity from elimination next week and also received 3 additional points. For the first time ever, each of the six couples that didn’t receive immunity were paired up to compete in a head-to-head dance-off to be voted on by America in real-time on www.ABC.com and the three judges. The couple with the majority of the four potential votes from each dance-off earned an extra 2 points, increasing their overall score. At the end of the night, one couple faced elimination. Did you watch the last episode? If you missed it we have a full and detailed recap, right here for you.  Did you miss any of last week’s dances?  If you did we have all the videos, right here.

On tonight’s episode as per the ABC synopsis, “this week the six remaining “Dancing with the Stars” couples perform two show-stopping dances. For the first routine, the couples will reveal a dance style not yet performed this season. Later in the show, they will be moved into teams to perform a side-by-side dance. Inspiration for the team routines were drawn from each teams’ travels around the country to experience live productions of famous shows such as The Beatles™ LOVE™ by Cirque du Soleil®, Broadway’s Chicago and Royal Caribbean’s “We Will Rock You.” At the end of the night, one couple will be eliminated.”

Announcement: Tamar was rushed to the hospital and will not be on the show this evening.

Judges Comments: Julianne: “The good news is the waxing paid off, the jacket looks good. Everything was great to watch, the bad news is you messed up a bit and when you use your hips, you need to use the floor.” Bruno: “The swagger, you were like a playboy on Miami Vice. It is good to see you get into the role and playing a character. You lacked the hip action, but it was still good.” Carrie Ann: “You have come so far, you have enhanced your performance. I felt like here was the music and here were you and it didn’t come together.”

Judges Comments: Bruno: “You really danced like a woman possessed. The choreography was brilliant! You danced like you danced before.” Carrie Ann: “That was more than dance, it was about feeling, you danced it raw and ripped it wide open. You pushed that message out there, great job.” Julianne: “When vulnerability comes in, strength comes in. Mark that was so awesomely choreographed. I hear you, I could feel that, you represented your emotions. Thanks for getting that out.”

Judges Comments: Carrie Ann: “I am struggling, it was good and clean, I loved watching it but it didn’t touch me. You had a lot going on but it didn’t come together for me and I’m worried because we are so far into the season.” Julianne: “You are an amazing dancer, you were great but you lacked the passion and dynamics.” Bruno: “I thought it looked like a dysfunctional couple, like in marriage counseling. One thing I noticed, you have to be careful of your feet, they need to be sharper on the hooks.”

Judges Comments: Julianne: “You are not alone, you are making me shake too. Tonight you were so different, there was a maturity about you. You take risks and never play it safe, that was a traditional dance.” Bruno: “My little diamond, you got it baby. This dance spoke for itself, you connect emotionally, it was pure beauty.” Carrie Ann: “There is so much to say, Julianne I think covered it best. When I watch you dance it is like watching a sunrise, it is art.”

Judges Comments: Bruno: “It could have been amazing, there were mistakes and balance issues.” Carrie Ann: “I think it is such a wicked shame, she is a great dancer.” Julianne: “Concept is great, live she would have brought it.”

Judges Comments: Carrie Ann: “I am happy you didn’t lose any mojo from last week. You are strong, you are in your element, you are in your zone. You are killing it, but you were a little out of sync.” Julianne: “When you were out of hold, you were straight out of Broadway. Keep that same attitude in hold.” Bruno: “I was watching very, very closely. I didn’t notice any of that, what I saw was slick, deadly cool and a dancing match made in movie heaven.”

Judges Comments: Julianne: “The lifts were amazing, but I have to be honest there was such an opportunity to have more energy when the men danced together and it was a little stale.” Bruno: “I loved it, especially the ending. But, you cannot hold back when you are charging at each other.” Carrie Ann: “That was a big song and I don’t think you filled the shoes for it, you were out of sync. It is tough, because it is a classic, your moves were small compared to the song.”

Judges Comments:  Bruno: “Style, feel, it was right on the money, wonderful!.” Carrie Ann: “I loved that you guys are such a perfect team.” Julianne: “It was perfect, I wish I was there with you.”

Tamar Braxton and her partner Val Chmerkovskiy team up with Nick Carter and his partner Sharna Burgess to the Beatles Love show.

Tamar returned from the hospital to dance with her team.

Judges Comments: Carrie Ann: “I have nothing but respect from you because that was a fantastic performance. I am astounded by your strength, you didn’t let them down.” Julianne: “I think what we all just witnessed was what the Beatles say, it is all about love. Nick stepped up as a leading man and Tamar didn’t let you down.” Bruno: “It was naughty and magical, it was about love.”

This means,  Alexa PenaVega and her partner Mark Ballas, Carlos Panavega and his partner Whitney Carson are in jeopardy.

On this ninth week of competition the couple leaving is Alexa PenaVega and her partner Mark Ballas.