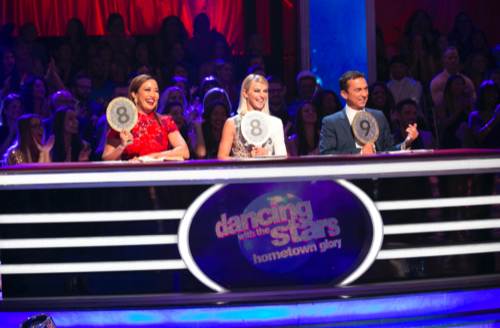 Tonight on ABC Dancing With The Stars 2015 airs with an all new Monday September 28, season 21 episode 3 and we have your weekly recap below. On tonight’s episode, an elimination occurs after the third week of performances, which feature songs celebrating iconic TV shows. Alfonso Ribeiro serves as a guest judge and there is a guest appearance from The Muppets.

On the last episode, at the end of the night, the couple with the lowest combined judges and viewer votes from last week were eliminated. The couples danced another dance to a song that the pro dancer has chosen that reminded them of where they grew up. Another couple were eliminated on Tuesday night based on the combined judges’ and viewer voted from Monday night. Did you watch the last episode? If you missed it we have a full and detailed recap, right here for you.

On tonight’s episode as per the ABC synopsis, “Host of “America’s Funniest Home Videos” and Season 19 Mirrorball Champion, Alfonso Ribeiro, returns to the ballroom for a special TV Night themed episode of “Dancing with the Stars.” Taking part in the celebration, Kermit the Frog, Miss Piggy, The Great Gonzo, Pepé the King Prawn, and other Muppets will kick off the evening followed by a huge opening number featuring the cast of “Dancing with the Stars.” The night continued when each couple performs an all-new routine to a theme song that commemorated iconic television throughout history, from “Breaking Bad” to “I Dream of Jeanie” and beyond. At the end of the night, the couple with the lowest combined judges and viewer votes from Tuesday, September 22 will be eliminated.”

Judges Comments: Alfonso: “You guys gave it your all, you were really good. Carlos you need to deliver more energy.” Julianne: “You guys look amazing but Alfonso was right, you were into character too much but overall it was fun.” Bruno: “It reminded of a scene in Cocoon, it was really good, you took it together beautifully.” Carrie Ann: “I don’t think you improved from last week, you are shrinking, I want you to get bigger.”

Judges Comments: Julianne: “This is fun but sometimes the theme gets away with us and this was one of those times. There were steps that went bad, I so wanted it to be good.” Bruno: “The Samba got strangled by the ship wreck. You were trying to get the steps right then it went to pieces, you had no bounce, you were flat.” Carrie Ann: “Everything they say is right, but you captured the spirit of what this show is about. Don’t get discouraged.” Alfonso: “We are proud that you are here, be proud that you gave it your all.”

Tamar Braxton and her partner Val Chmerkovskiy dancing the Tango

Judges Comments: Bruno: “You two mean business to the bitter end. That characterization was prefect for the tango.” Carrie Ann: “That was must see TV. You came out and turned tonight’s temperature up really high.” Alfonso: “You are a front runner, there is a lead and a follower, let him lead you to the finish line, he has done it before.” Julianne: “I love that you are fierce and a strong woman, there was an innocence, it was refreshing.”

Judges Comments: Carrie Ann: “That was genius, it was amazing, very powerful, well done.” Alfonso: “That was fantastic, you two can win, this is your relationship in this ballroom, stay connected, you can win.” Julianne: “I am going to second that, this is the first time that I think the two of you were a team. Keep that going, I loved it.” Bruno: “Absolutely nothing was wrong or bad about that. You kept up with each other and looked like true professionals.”

Judges Comments: Alfonso: “I remember when I did the Quickstep and had problems and that is what I saw tonight.” Julianne: “The shoulders were a little down but that is how you take a theme night and go with it.” Bruno: “I love the up beat, it was right on time. Now you have to work on finishing things correctly, crisp and clear, now they are fuzzy.” Carrie Ann: “It was very entertaining, just partner up, you’ve got each other, get the eye contact.”

Judges Comments: Julianne: “One word perseverance, you have improved and it is so refreshing. You nailed every step, it was awesome.” Bruno: “That was delicious, perfectly cast. You did the tango, it was well done.” Carrie Ann: “Tonight you especially handsome, it added to the debonair. There was a new found elegance, bravo.” Alfonso: “I am in love with you, you were in character all the time, that was an Academy Award winning performance.”

Judges Comments: Bruno: “True talent runs in your blood, it was entertaining to the last bite. There was only a slight misplacement, well done.” Carrie Ann: “There was only a slight boo boo in the middle, but you got game, you are a powerful partner.” Alfonso: “You are a hero and you danced like a hero tonight.” Julianne: “I lost my train of thought, I didn’t see any problems, it was perfection.”

Kim Zolciak is officially eliminated for missing the week!

Judges Comments: Alfonso: “Very cool, I love you you are great energy. Make sure you keep your posture, your butt in.” Julianne: “This was not your best dance, make sure the body contact gets better.” Bruno: “You were bursting with energy, but you have to stay in place or you loose your place. Still great.” Carrie Ann: “Just a few tiny mistakes, but you are a solid competitor.”

Judges Comments: Julianne: “You were a leading man tonight, that was beautiful, best dance of the night.” Bruno: “Refined and lots of attention to detail. There wasn’t an intention out of synch with what you wanted to do.” Carrie Ann: “Tonight you went from pop star to classical performer.” Alfonso: “Rehearsal is a marathon not a sprint, you will get there each week.”

Hayes Grier and his partner Emma Slater dancing the Jive

Judges Comments: Bruno: “You are star quality, but keep your feet on the ground.” Carrie Ann: “I lost something with the mask, it wasn’t your best performance, I do appreciate how hard you worked though.” Alfonso: “I do agree, mid way through the routine you lost a little bit of that energy, make sure you finish your routine. Keep it up.” Julianne: “I appreciate that you hit every single move, you were just a little bit off, make sure you are aware of each other.”

Time for some scores, the first couple in jeopardy is Andy Grammer and his partner Allison Holker. Joining them are, Paula Deen and her partner Louis Van Amstel. The remainder of the contestants are safe and since Kim and Tony were eliminated, nobody else is going home tonight.