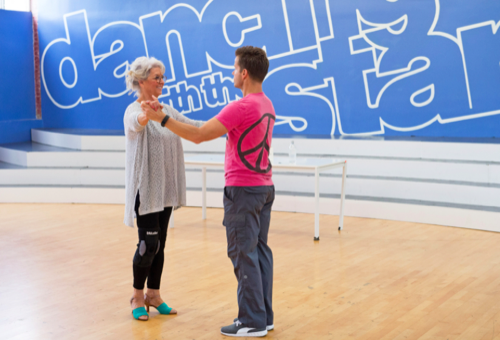 Tonight on ABC Dancing With The Stars returns for a third week and Paula Deen and her professional dancing partner Louis Van Amstel danced a Samba routine to the theme from Gilligan’s Island. On tonight’s episode the 11 couples dance an all-new routine to a theme song that commemorates iconic television throughout history, from “Breaking Bad” to “I Dream of Jeanie” and beyond. Did you watch tonight’s episode? If you missed it we have a full and detailed recap, right here for you.  Did you miss any of tonight’s performance videos? If you did we have them all, right here for you!

Taking part in the celebration, Kermit the Frog, Miss Piggy, The Great Gonzo, Pepé the King Prawn, and other Muppets will kick off the evening followed by a huge opening number featuring the cast of “Dancing with the Stars.”

On last week’s premiere episode of DWTS Paula performed a Tango (VIDEO HERE) and the judges scored Paula a 18/30 for her performance. Bruno loved her performance and had this to say, “Red hot mama, I love it. Keep boiling, but don’t boil over because then you forget the steps, keep the right temperature at all times.”

Judges’ comments on Paula’s Week 3 Samba: Julianne: “This is fun but sometimes the theme gets away with us and this was one of those times. There were steps that went bad, I so wanted it to be good.” Bruno: “The Samba got strangled by the ship wreck. You were trying to get the steps right then it went to pieces, you had no bounce, you were flat.” Carrie Ann: “Everything they say is right, but you captured the spirit of what this show is about. Don’t get discouraged.” Alfonso: “We are proud that you are here, be proud that you gave it your all.”

Watch the video below and let us know what you think, do you agree with the judges comments? Do you think Paula did enough to avoid elimination tomorrow? Sound out in the comments and let us know your thoughts?