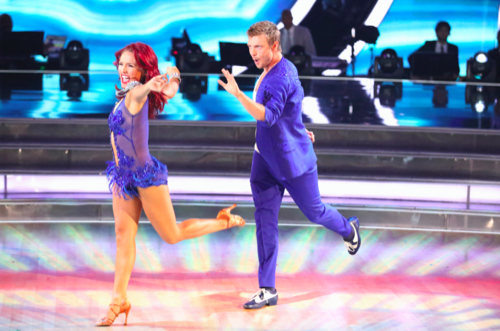 Tonight on ABC Dancing With The Stars returns for a second week and Nick Carter and his professional dancing partner Sharna Burgess danced a jive routine to “Boogie Woogie Bugle Boy.” On tonight’s episode the 13 couples dance to a song that commemorates the celebrity’s hometown. Did you watch tonight’s episode? If you missed it we have a full and detailed recap, right here for you. Did you miss any of tonight’s performance videos? If you did we have them all, right here for you!

On last week’s premiere episode of DWTS Nick performed a Cha Cha Cha and the judges scored Nick a 24/30 for her performance. Julianne Hough loved his performance and had this to say, “Always a fan, I just gotta say this night has been amazing and what a way to wrap up the night. You were going off time and in time and it was really creative and I loved it. Sorry im blushing!”

Judges’ comments on Nick’s Jive: Julianne: “Okay, for those of you who didn’t see it – he threw his shoes off because he did sleep. It was a little bit messy, maybe not as strong s last week but still a great way to start the night.” Bruno: “That woke me up, I feel like I had a double espresso, I was buzzing. You were buzzing too much, you forgot the steps sometimes. You didn’t let it bring you down though, you carried through and sold it. It was a bit rough but points for the performance value.” Carrie Ann: “It was rough, I felt like the moment you got up you were struggling with your pajamas and it threw you off. I saw it last week too, you get a bit heady. Stop that, there is no need, you’re a Backstreet Boy.”