Dancing With the Stars 2015 Week 2 Recap – Victor Espinoza and Karina Smirnoff Voted Off: Season 21 Episode 2A 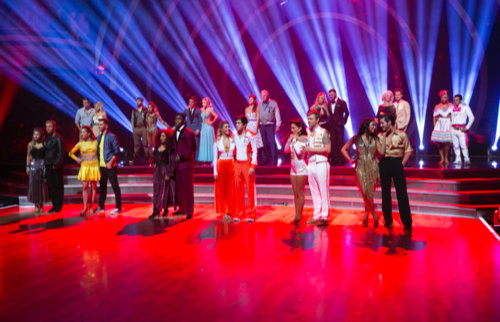 Tonight on ABC Dancing With The Stars 2015 airs with an all new Tuesday September 22, season 21 episode 2A and we have your weekly recap below. On tonight’s episode, in part 2 of a 2 episode premiere the celebs dance again and at the end of the evening an elimination occurs.

On the last episode, “Dancing with the Stars” was back with a two-night event. The couples were gearing up for one of the toughest weeks of the competition this season with two live shows and a double elimination. In “Hometown Glory” night, each couple will dance two new dance styles to songs that reminded the celebrity and pro dancer of the placed that shaped who they are today. Did you watch the last episode? If you missed it we have a full and detailed recap, right here for you.

On tonight’s episode as per the ABC synopsis, “at the end of the night, the couple with the lowest combined judges and viewer votes from last week will be eliminated. The couples will dance another dance to a song that the pro dancer has chosen that reminds them of where they grew up. Another couple will be eliminated on Tuesday night based on the combined judges’ and viewer votes from Monday night.”

Hayes Grier and his partner Emma Slater dancing the Quickstep

Judges Comments: Julianne: “It was fresh, it was useful and it was everything that you are as a couple. I just want you to get your booty under a bit.” Bruno: “It was hip, it was cool, it had joyfulness, you were like a super model, you just lost your frame a bit, but your best dance so far.” Carrie Ann: “You stayed in hold the whole way through, I loved it. I enjoyed the sound of your feet.”

Carlos Panavega and his partner Whitney dancing the Cha Cha

Judges Comments: Bruno: “Never leave up the chase until you win, I appreciate what you put into this but at times you were squatty, you missed a couple of steps. You covered it up beautifully.” Carrie Ann: “I wasn’t impressed tonight, I think you are fantastic and have so much swagger but you shortened it, don’t shorten it.” Julianne: “You have style, you have the groove, you have swagger, you are such a great performer but your legs were really bent and that is why you were squatty. Thank you though for the entertainment.”

Judges Comments: Carrie Ann: “Intensity check, lots of checks but no Paso Doble. You were out of your element, but it was still fun to watch.” Julianne: “You are having so much fun, we can’t but smile and root for you. I was a little intimated that you were going to forget your steps. I love the entertainment.” Bruno: “You went monumental with splendor, but the steps were off kilter. I look forward to seeing next week.”

Judges Comments: Julianne: “Dancing is hard, it takes a lot of time and energy and there is nothing like that feeling where you are so present and tonight I felt that. You have to finish your arms though, but it was really beautiful and so much better than last night.” Bruno: “That was difficult, but you did a very good job. Everything was good, but you nearly missed the lift.” Carrie Ann: “Last night you struggled with the music, but tonight you listened to us, I felt the commitment, you were in it, well done.”

Alexa Panavega and her partner Mark Ballas dancing the Rumba

Judges Comments: Bruno: “No messing around, sensual, classic Rumba.” Carrie Ann: “I love hearing more about our pros, you nailed the signature move, however in the beginning you were a bit stiff – it didn’t quite come together for me.” Julianne: “Tonight is about being poised, I agree with Carrie Ann, at times you didn’t do the hip action but it was still beautiful.”

Judges Comments: Carrie Ann: “You are so sexy, I was blown away with your sex appeal. You made a few mistakes, you are light on your feet and it is time to get into the detail, you need to get the choreography.” Julianne: “We do have to take into consideration that there are two dances, tonight you had this attitude sass thing, you were giving it and I love it.” Bruno: “Red hot mama, I love it. Keep boiling, but don’t boil over because then you forget the steps, keep the right temperature at all times.”

Bindi Irwin and her partner Derek Hough dancing the Waltz

Judges Comments: Julianne: “What I just saw was two dancers dancing as one, it was so beautiful. You are such a blessing to girls out there that it is ok to go outside your comfort zone.” Bruno: “That was so beautiful, it was so good but be careful with your shoulders, it was close to perfection.” Carrie Ann: “It was absolutely stunning, something magical was happening until your feet lifted off the floor, it was so special.”

Kim Zolciak with her partner Tony Dovolani dancing the Foxtrot

Judges Comments: Bruno: “We all like the new Kim, you have the potential so don’t play it safe. You have to push it further, you have a long way to go, watch your footwork, but there was progress.” Carrie Ann: “I think you really are a better dancer than you think you are. You did better yesterday, you dropped the energy back out of the dance.” Julianne: “The thing to work on is when you hit a line you stop, you need to continue, travel with your long legs. We love it and want you to improve each week.”

Alek Skarlatos and his partner Lindsay Skarlatos dancing the Quickstep

Judges Comments: Carrie Ann: “It was ok, I salute your teaching, you trust in your partnership. There is a weird thing about you two, you are a power couple.” Julianne: “I think overall, I forget how old you are because you are so mature.” Bruno: “For me, I am going to rename you Alek the Great, you did great. You were the only one tonight doing a Quickstep who did it on their toes.”

Victor Espinoza and his partner Karina Smirnoff dancing the Rumba

Judges Comments: Julianne: “You looked like you are ten feet tall tonight.” Bruno: “You had the commanding performance of a giant.” Carrie Ann: “Whoever said size matters never met you, it was amazing.”

Nick Carter and his partner Sharna Burgess dancing the Foxtrot

Judges Comments: Bruno: “You were back on track, so well together, I loved seeing you in form.” Carrie Ann: “It was magical tonight.” Julianne: “You were there for Sharna, you protected her and it was so beautiful. You need to watch your chest.”

Tamar Braxton and her partner Val Chmerkovskiy dancing the Charleston

Judges Comments: Carrie Ann: “You killed it, you are a dynamic couple, you nailed it.” Julianne: “Did you practice last night, it was seamless and so on point. You went from sultry to cute coffee girl.” Bruno: “It was so uplifting, it was fantastic, I loved it.”

Time for some results, the first couple in jeopardy are Gary and Anna, joining them are Victor and Karina. The couple leaving right now is VICTOR AND KARINA.