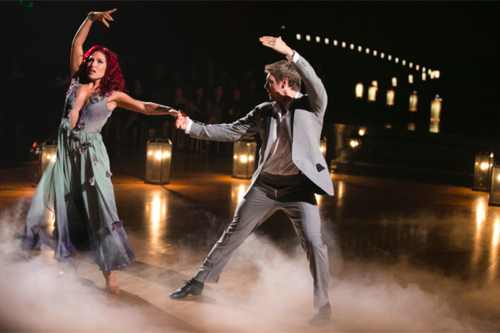 Tonight on ABC Dancing With The Stars returns for a third week and Nick Carter and his professional dancing partner Sharna Burgess danced a Viennese Waltz routine to the theme from Downton Abbey. On tonight’s episode the 11 couples dance an all-new routine to a theme song that commemorates iconic television throughout history, from “Breaking Bad” to “I Dream of Jeanie” and beyond. Did you watch tonight’s episode? If you missed it we have a full and detailed recap, right here for you.  Did you miss any of tonight’s performance videos? If you did we have them all, right here for you!

Taking part in the celebration, Kermit the Frog, Miss Piggy, The Great Gonzo, Pepé the King Prawn, and other Muppets will kick off the evening followed by a huge opening number featuring the cast of “Dancing with the Stars.”

On last week’s premiere episode of DWTS Nick performed a Jive (VIDEO HERE) and the judges scored Nick a 21/30 for his performance. Bruno loved his performance and had this to say, “That woke me up, I feel like I had a double espresso, I was buzzing. You were buzzing too much, you forgot the steps sometimes. You didn’t let it bring you down though, you carried through and sold it. It was a bit rough but points for the performance value.”

Judges’ comments on Nick’s Week 3 Viennese Waltz: Julianne: “You were a leading man tonight, that was beautiful, best dance of the night.” Bruno: “Refined and lots of attention to detail. There wasn’t an intention out of synch with what you wanted to do.” Carrie Ann: “Tonight you went from pop star to classical performer.”Alfonso: “Rehearsal is a marathon not a sprint, you will get there each week.”