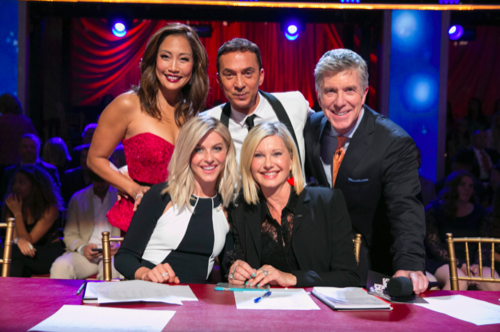 Tonight on ABC Dancing With The Stars 2015 airs with an all new Monday October 26, season 21 episode 7 and we have your weekly recap below. On tonight’s episode, an elimination occurs after the seventh week of performances, which feature Halloween-themed routines and team dances.

On the last episode, the remaining nine celebrities returned to their original professional dance partners to tackle “Famous Dances Night.” Special guest Olivia Newton-John joined Julianne Hough, Carrie Ann Inaba and Bruno Tonioli at the judges’ desk to see how the couples re-created iconic dance routines from movies and music videos. One couple was eliminated at the end of the night based on the lowest combined judges’ scores and viewer’s votes from the “Switch Up” and “Most Memorable Year” performances. Did you watch the last episode? If you missed it we have a full and detailed recap, right here for you.

On tonight’s episode as per the ABC synopsis, “Dancing with the Stars” treats viewers to a thrilling ‘spooktacular’ night filled with scary and chilling performances. The eight remaining couples will perform an individual Halloween-themed routine in addition to a competitive team dance. For the team dances, the cast has been divided into two frightening teams: Team #Nightmare and Team #WhoYouGonnaCall. These two teams will compete against each other, vying for a perfectly wicked score from the judges. Actress and “Dancing with the Stars” Season 17 semi-finalist Leah Remini also returns to guest co-host alongside Tom Bergeron. At the end of the night, one couple will face elimination.”

Judges Comments: Julianne: “The thing that I love so much about you Nick is your attitude and your commitment in everything you do. The next step is you need to make your steps sharper.” Bruno: “I was bewitched by the creature of your own creation. It did lose the flavor though of the Argentine Tango, it is supposed to have a stalking quality. Your intent lost the flavor of the dance.” Carrie Ann: “I think you were a it nervous on the dry ice, when you came down front and center it was Frankensexy, you did not break character once. Keep it up.”

Judges Comments:Bruno: “You are the most romantic teen wolf, you listened to Emma and it worked. Your lines were controlled and beautifully placed.” Carrie Ann: “You have incredible potential, at the beginning you made me feel uncomfortable but everything else was good even your chemistry.” Julianne: “Something different happened tonight, you gave me chills in the beginning because there was a maturity that wasn’t there last week, you turned it around. For me tonight, you were a leading man.”

Judges Comments: Carrie Ann: “That was so many things, the best thing about that is that I felt you cut off your head and just dance and that is what I wanted from the beginning. You danced like there was no tomorrow, I am so proud of you.” Julianne: “Everyone is feeling the pressure right now, I haven’t been able to put my finger on it, but I think I just got it. When you are dancing, you sometimes lose it, then you go back again. You did good tonight though.” Bruno: “What I think was brilliant about this though is that you really kept it perfectly together and it looked like a Paso Doble all the way through. It was Tim Burton, it was great.”

Judges Comments: Julianne: “Believing in yourself and having that confidence can totally get you to the next step to the point that you think you actually may win. With that being said, there was a little mistake in the beginning, there was a disconnect.” Bruno: “I know the way you are driven, I love it but you did miss a few things, it was off a few times because you were almost over driven.” Carrie Ann: “I think you were actually out of sync, I agree with Julianne and Bruno but Tamar is the most natural mover. Our goal is to judge, we would like to see growth and I thought there was growth in hold. But, it was push and pull because there were mistakes.”

Judges Comments: Bruno: “No question, full bite, full blood and full spunk. You went at it like a bat out of hell. But, you lost the shaping, you have to retain the Spanish flavor.” Carrie Ann: “I thought the same thing but I thought it totally worked.” Julianne: “I don’t know what this says about me, but I am extremely turned on right now. I have to be honest, I agree with Bruno, but it was still weird and awesome.”

Judges Comments: Carrie Ann: “All hail the queen of darkness, I never in a million years thought that Halloween night you would shine your brightest.” Julianne: “You guys are on a whole other level together, this thing that was so intense. That was something so strong and deep rooted.” Bruno: “That was an Argentine Tango master class, spell binding magic.”

Judges Comments: Julianne: “Thank you for coming back to the Alek that I remember from the beginning of the competition. Thank you for working on your facial expressions, you had passion and aggression – you showed it tonight.” Bruno: “The woman in black has the trick, you were more dynamic, you were more present, you lead the dance and you were giving me a character and this is the way to go. I am going to overlook the footwork because you are moving in the right direction.” Carrie Ann: “I believe the hero has returned and you are now a contender, you got mad and the judges were right.”

Judges Comments: Bruno: “I love the epic scale, the cape work was masterful. It was almost perfect but you lost your balance in the beginning.” Carrie Ann: “Most people when they put a mask on their performance goes down, yours went up. You anticipated the beat a little to fast sometimes, be careful.” Julianne: “I’m a little shocked, you said you were over scored last week. This is the style I want to see and you nailed it.”

Judges Comments: Julianne: “The concept was so fun, the concept, the hair and makeup. Hayes stood out in this routine. It was honestly one of the best team dances ever.” Bruno: “That was a monster smash, I felt like I was watching a Broadway show. It was flawless and the story line was crisp and clear, you were all on fire.” Carrie Ann: “First I have to say thank you Nick. If I was the other team I would be pooping in my pants right now, that was great.”

Judges Comments: Bruno: “You definitely killed that number, you captured the fan of the movie. I spotted for a second one person slightly off sync in the beginning, but I loved it.” Carrie Ann: “I thought the energy was fantastic, but the girls in the beginning were out of sync. But I thought as a group Alek did really well, you were so powerful.” Julianne: “I didn’t see anyone mess up, it was just to foggy. This was a group coming together having fun.”

On this seventh week of competition the couple leaving right now is Hayes Grier and his partner Emma Slater.