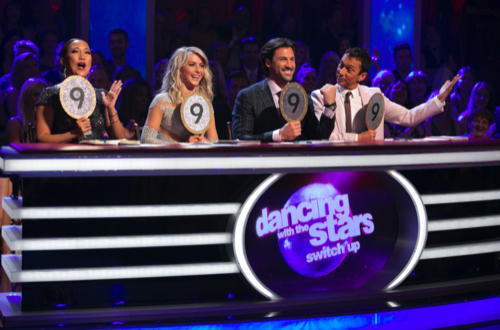 Tonight on ABC Dancing With The Stars 2015 airs with an all new Monday October 19, season 21 episode 6 and we have your weekly recap below. On tonight’s episode, an elimination occurs after the sixth week of performances, which feature famous dance routines from movies and music videos. Olivia Newton-John serves as a guest judge.

On the last episode, fan engagement through social media helped to switch up the nine remaining couples. Celebrities and professional dancers switched partners. Season 18 Mirrorball-winner Maksim Chmerkovskiy guest judged alongside Julianne Hough, Carrie Ann Inaba and Bruno Tonioli. The pressure was on for the pro dancers to choreograph new dances with new partners. Each couple danced to a different style of dance, including the Jive, Cha Cha and Tango. Celebrities performed one routine with their “switch up” partner. Did you watch the last episode? If you missed it we have a full and detailed recap, right here for you.

On tonight’s episode as per the ABC synopsis, “the remaining nine celebrities return to their original professional dance partners to tackle “Famous Dances Night.” Special guest Olivia Newton-John will join Julianne Hough, Carrie Ann Inaba and Bruno Tonioli at the judges’ desk to see how the couples re-create iconic dance routines from movies and music videos. One couple will be eliminated at the end of the night based on the lowest combined judges’ scores and viewer’s votes from the “Switch Up” and “Most Memorable Year” performances.”

Judges Comments: Olivia: “Wow, amazing choreography, I can believe you are 15 Hayes, you look like a baby John.” Bruno: “You were great, I believe in your talent but you need to take it to the next stage. You are sometimes a little shaky, you need to be sharper.” Carrie Ann: “You are such a stud, I want you to finesse some of your lines, you have so much potential.” Julianne: “All I have to say is it takes a lot of courage because Olivia is here, you opened the show and being compared to John Travolta. Each week I tell you to open your eyes and you did it tonight.”

Judges Comments: Bruno: “That was the greatest musical of all time and it took balls to take that on, you succeeded.” Carrie Ann: “There are some big shoes tonight, but these are obviously really big shoes and you filled them with ease and grace.” Julianne: “I was a little worried going into it because this is an iconic dance, my all time favorite. Every single week you are getting better and better, everyone else needs to watch out for you.” Olivia: “I actually danced with Gene Kelly and I would dance with you anytime, you were so good.”

Judges Comments: Carrie Ann: “This was the height of Britney’s career and she owned that stage. I feel like you did the movements well but you missed the essence of Britney in that routine. I feel like you just were not aware of all the movements. You only owned it when you got the snake and that is what I wanted from the beginning.” Julianne: “I think what made Britney so grounded is that she focused, don’t be too hard on yourself it was still sexy.” Olivia: “I thought you were very sexy and very brave.” Bruno: “I think for me, it was very good. I loved in the cage, but you need to get out of the cage all the time. Your free hand wobbled, you need to work on that.”

Judges Comments: Julianne: “Your legs were on fire, the dynamics and the details were point on, you had every one. We were all transported, it was amazing and so much fun.” Olivia: “It was so wonderful to see you both, you were amazing and absolutely incredible. You really touched my heart, an enchanting job.” Bruno: “It was astonishing, you captured everything about the dance and you made it your own.” Carrie Ann: “When you dance like that, you make my job easy.”

Judges Comments: Olivia: “You look gorgeous and you look like you were having fun, you did Madonna proud.” Bruno: “I’m not sure about Vogue, it was more like the National Enquirer, the content had to be taken with a pinch of salt. I loved the way you moved though, like a lampshade on wheels.” Carrie Ann: “I was wondering what happened to that sexy little beast we had last week. I was hoping you would bring that to this number, the costume overwhelmed you.” Julianne: “I think that was a perfect opportunity for you to be dramatic, but you were lacking the sexual tension.”

Judges Comments: Bruno: “I feel like I have experienced the seven deadly sins, I don’t know about you, but you answered my prayers.” Carrie Ann: “I know your fear, but there is nothing to be afraid of. You owned it, you did it with style and grace.” Julianne: “First of all, you handled it like a pro, that was probably the sexiest Rumba I have ever seen. But also, I respect what you had to say, you commit to something you can get that into your head because it is a performance.” Olivia: “I am kind of speechless, I think you missed your calling, there is a place in Vegas for you if you ever want to go there.”

Judges Comments: Carrie Ann: “It was good but it wasn’t perfect to me. I saw you come in and out of character, you gave us some but it was like a percentage. Some movements you obviously felt comfortable with and some you didn’t. There was an inconsistency, you have to stay confident.” Julianne: “Now to me, I thought that was a true reinvention of that dance. You gave all of the elements, the essence of the dance was there but on top of that, that Samba, was like a real Samba. I thought it was absolutely outstanding.” Olivia: “I think you brought disco back, you channeled John, fantastic.” Bruno: “I have to point out that it was a very good Samba and it carried out the disco feel, it was absolutely brilliant.”

Judges Comments: Julianne: “Elvis is the biggest character in the world, it is hard to do. Every week I ask you to improve and I think you did that, but you have to connect even harder. You have stay into character and bring it all together.” Olivia: “It takes a lot of courage to take on the king and I think you did a really good job.” Bruno: “You really tried to get into the style and put a lot of jive content into it. Every pelvic thrust, you cannot hold back; that is the attitude you need to have.” Carrie Ann: “I definitely saw that you connected more, I would like to see you work with Artem and learn from him. You are just below being a contender but you have possibility; you need to work with a man.”

Judges Comments: Olivia: “That was fantastic choreography, you were very good, I was impressed with that.” Bruno: “That is how you stage a combat, you come back and you hit with a knockout. You sent a benchmark for everyone in this industry, you led this dance and you were the star of the show.” Carrie Ann: “Thinking about last week, you had low scores, but tonight, this was the hardest to do perfectly and I think you nailed it.” Julianne: “In a group, one mistake and you see it, but you didn’t mess up. I really believe this dance was made for you to one day perform it.”

RESULTS: The first couple in jeopardy is Paula Deen and her partner Louis Van Amstel and joining them is Alexa PenaVega and her partner Mark Ballas. The remaining couples are safe.

FINAL RESULTS: In this sixth week of competition, Paula Deen and her partner Louis Van Amstel are ELIMINATED.