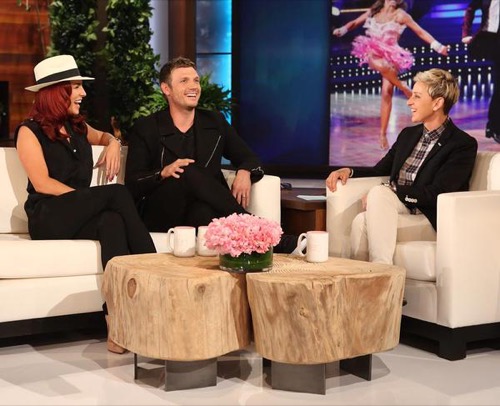 Tonight on ABC Dancing With The Stars returns for a six week and Nick Carter and his professional dancing partner Sharna Burgess danced a Samba routine to “You Should Be Dancing” from Saturday Night Fever.  On tonight’s episode  the nine remaining celebs will return to their original professional dance partners and the couples must re-create iconic dance routines from movies and music videos.

One couple will be eliminated at the end of the night based on the lowest combined judges’ scores and viewer votes from The Switch Up Week 5 and Most Memorable Year Week 4. Did you watch tonight’s episode? If you missed it we have a full and detailed recap, right here for you. Did you miss any of tonight’s performance videos? If you did we have them all, right here for you!

Film legend Olivia Newton-John steps into the ballroom to judge the remaining nine celebrities as they tackle “Famous Dances Night.”  Judges Julianne Hough, Carrie Ann Inaba, Bruno Tonioli and Newton-John will be on the lookout to see how the couples re-create iconic dance routines from movies and music videos.

Judges’ comments on Nick’s Week 6 Samba:  Carrie Ann: “It was good but it wasn’t perfect to me. I saw you come in and out of character, you gave us some but it was like a percentage. Some movements you obviously felt comfortable with and some you didn’t. There was an inconsistency, you have to stay confident.” Julianne: “Now to me, I thought that was a true reinvention of that dance. You gave all of the elements, the essence of the dance was there but on top of that, that Samba, was like a real Samba. I thought it was absolutely outstanding.”Olivia: “I think you brought disco back, you channeled John, fantastic.”Bruno: “I have to point out that it was a very good Samba and it carried out the disco feel, it was absolutely brilliant.”