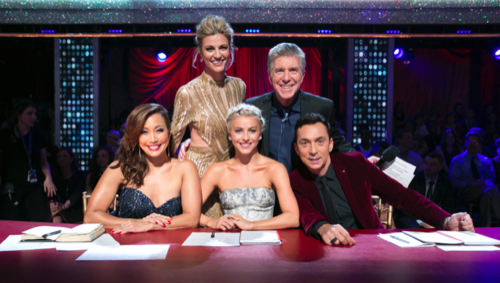 Tonight on ABC Dancing With The Stars 2015 airs with an all new Tuesday November 24, season 21 finale night two and we have your weekly recap below. On tonight’s episode, after weeks of competitive dancing, the winner of season 21 of DWTS will be announced.

On the last episode, the finalists competed during the 11th week of performances, which featured two rounds of dances, including a freestyle round with special effects. Also there were performances by Meghan Trainor, Who Is Fancy and Ariana Grande.  By the end of the evening Carlos PenaVega and his professional dancer Witney Carson were sent home.  Did you watch the last episode? If you missed it we have a full and detailed recap, right here for you.

On tonight’s episode as per the ABC synopsis, “There will be live dancing and show-stopping performances at the Grove shopping center and in the DWTS ballroom. The night begins with an exhilarating number, featuring a reunion of all 13 of this season’s couples at the Grove, with performances from Alexander Jean, Andy Grammer, Chaka Khan, Elle King and Nick Carter. Eliminated contestant Kim Zolciak returns to the ballroom to dance a Samba with Tony Dovolani to “I Dream of Jeannie,” along with encore dances from the eliminated celebrities. The cast of the upcoming “Dancing with the Stars: Live! Dance All Night Tour” will perform a dance to Avicii’s “Broken Arrows”. Then, the three finalists will each dance a repeat dance from this season. In the last element of competition, the couples will perform a new routine that’ll be part of the “24-Hour Fusion Challenge.” The remaining couples will fuse two contrasting dance styles that they’ve performed this season and they’ll have less than 24 hours to prepare that dance for judges’ points BEFORE the mirrored-ball trophy winner is announced.”

Tonight’s show opens with a live performance by the DWTS cast and crew.  Later we are shown highlights of the highpoint of each of the celebs dances from Part 1 of the season finale.

Next up is Chaka Khan performing her number one disco hit, “I’m every women.”

We have a look back at some moments from the first couple of weeks of the competition.

Kim Zolciak and Tony Dovolani performed a dance to, “I Dream of Jeannie.”

Carlos PenaVega and the male cast of DWTS perform a Magic Mike routine.

Next up is Andy Grammar singing at The Grove.

Time for the last dances of the competition.

Judges comments: Julianne: “You left it all on the dance room.  I so enjoyed watching you this season.”  Bruno: “We can always count on you to spice up the night.  I loved it.”  Carrie Ann: “I’m sad that this is the last time I am going to see your dance.  You have been wonderful tonight.  You are the biggest deal, don’t doubt that.”

Judges comments: Bruno: “Your hips are starting to come alive.  Well done, a hard dance and a couple of foot problems. But what you have achieved is amazing.”  Carrie Ann: “For me when I watch you the only word that flows through me is integrity.  Boy you gave it to us tonight.”  Julianne: “I was going to say your Rumba tonight was better tonight than last time.  The sky is full of stars and your future is so bright.”

Judges comments: Carrie Ann: “I can think of a better way or perfect way to end this perfect season.  From the moment you walked into the ballroom you lit us all up.”  Julianne: “It was every that a fusion should be you have been a pure joy.”  Bruno: “Bindi the great, you are a dancing great, a sensation.”