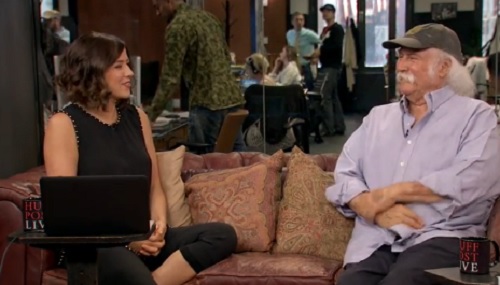 Musician David Crosby has made it very clear that he is not fond of Kanye West, nor does he think that West possesses any talent, but after publicly announcing his feelings regarding Kanye West, it seems that Crosby has no intentions of retracting his statement.

Back on March 3, 2015, a fan tweeted David Crosby and said, “opinion on Kanye’s music, impact as an artist?” Crosby immediately responded to the question by saying, “Music ? .. He’s an idiot and a poser…has no Talent at all.” Ouch! Those are definitely some harsh words and we are sure that Kanye was not too fond of Crosby’s remarks. Of course, knowing Kanye West, he probably did not even acknowledge them and felt that he was too good to pay attention to what anyone else thought of him.

David Crosby stopped by HuffPost Live on Friday, June 26 to discuss his upcoming tour but the host, Alyona Minkovski, decided to ask Crosby about the comment he made towards Kanye West, and if his opinion has changed. Crosby did not hesitate to respond. He made it clear that his opinion has not changed one bit. Crosby said, “Kanye West can’t write, sing, or play, so I have trouble with him as anything but a poser.” He goes on to discredit Kanye West as a producer, also saying that what he really means is that Kanye just “sits in a chair while the engineer does the work.”

Everyone is entitled to their own opinion, and while Kanye West is a jerk and has basically built an image upon the fact that he is a rude person, it is hard to discredit Kanye West as a musician due to the 21 Grammy Awards that he has earned throughout his career. In addition to music, Kanye is a visionary in the fashion industry and is respected by some of the top designers in the fashion world for his artistic vision. So, at the end of the day, Kanye West is a jerk, but a talented jerk at that.

What do you think of David Crosby’s comments? Do you agree or disagree? Let us know in the comments below.