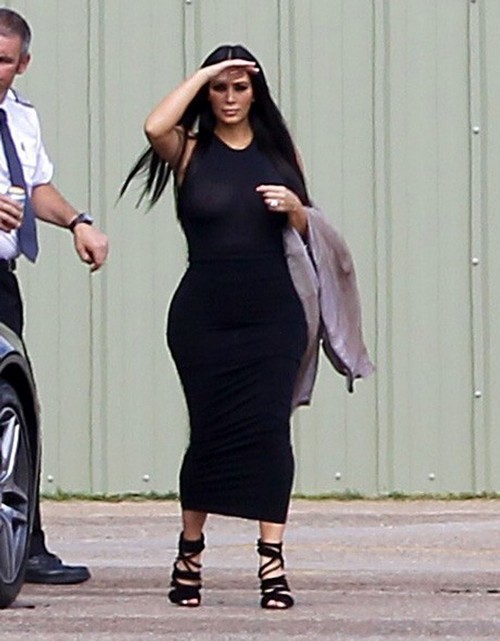 Kim Kardashian was determined to get pregnant with baby number two to save her marriage to Kanye West, but pregnancy seems to be having the opposite effect – and Kimye appear more likely to get a divorce now than they were ever before. You would think that Kanye West would be thrilled that he is getting the son he always wanted after nearly a year of fertility woes, but the rapper seems relatively uninterested in his growing family and is keeping his distance from his pregnant wife.

Kim Kardashian stepped out at the Cannes Film Festival for a yacht party hosted by DailyMail with her mother Kris Jenner and her sister Kylie Jenner, and their boyfriends Corey Gamble and Tyga. Kanye West was nowhere in sight, and Kim was stuck playing the awkward 5th wheel, and she stuck out like a sore thumb because she crammed her baby bump in to a lacey see-through dress that isn’t exactly appropriate maternity wear.

Kim Kardashian’s pregnancy with North West was no walk in the park, and this pregnancy already is taking its toll on the reality TV star. Kim is furious that Kanye basically abandoned her and left her to cope with her rapid weight gain, intense morning sickness, and their toddler North all by herself. And, to add insult to injury Kim is feeling very insecure about her weight gain and hates that she has to attend events by herself, where witnesses ridicule her and stare at her widening frame and baby bump.

An insider close to the Kardashians dished to CDL, “Kim’s hormones are raging right now, she is a sappy and emotional mess. She hates that Kanye isn’t by her side and helping her through this pregnancy and when he didn’t attend the yacht party with her Kim went ballistic. Witnesses overheard her ranting to her mother that she was going to “show Kanye” and “divorce him for real this time.”

Kanye West is playing with fire, we all know you don’t mess with a hormonal pregnant woman who is upset about her weight. It really would be kind of ironic if Kim divorced Kanye while she was pregnant, after all when she was pregnant with North she was busy divorcing Kris Humphries. Do you think that Kanye and Kim will be able to work through this? Or is a divorce unavoidable? Let us know what you think in the comments below!

Pregnant Kim Kardashian and Kanye West seen on a night out in London, UK on June 28, 2015. The pair were spotted out for dinner at Hakkasan and the Dorchester Hotel.

Pregnant reality star Kim Kardashian and her husband Kanye West leave the Dorchester Hotel in London, England and catch a helicopter out of Denham Airfield on June 27, 2015. Kim left little to the imagination in her form fitting, see through black dress. The pair are flying into Glastonbury where Kanye is headlining tonight. FameFlynet