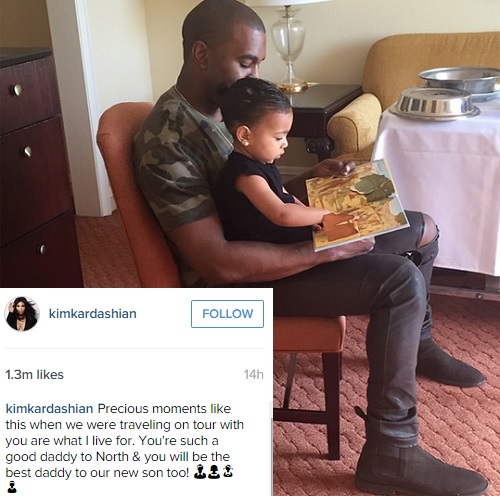 Kim Kardashian is pregnant with a boy, as if we didn’t all already know that, and she announced the news on Instagram. On May 31, Kim Kardashian revealed on an episode of Keeping Up With The Kardashians that she had finally gotten pregnant again after months of fertility problems, and she and Kanye West were having baby number two. As soon as Kimye broke the news, everyone began speculating whether Kim was having another girl, a boy, or possibly even twins – after all, that is a real possibility with IVF treatments.

CDL has been reporting since day one that Kim Kardashian was pregnant with a baby boy. Kanye West has stated on more than one occasion that he wanted to have son, or an “heir,” because you know he and Kim are totally royalty. Money is not an issue for Kim and Kanye, and medicine has come a long way – if they wanted to have a son then the doctors could make sure that happened, and manipulate Kim’s fertility treatments to make sure that they were only male embryos.

Kim Kardashian, always the drama queen, still tried to make the announcement that she was having a baby boy a huge thing – even though we have all known for weeks that she and Kanye were having a son. Kim took to Instagram on Father’s Day, June 21, and announced the not-so-shocking news. Kim shared a photo of her husband Kanye West holding their daughter North and captioned it:

“Precious moments like this when we were traveling on tour with you are what I live for. You’re such a good daddy to North & you will be the best daddy to our new son too!”

So, now we can officially begin speculating about baby names. We were all seriously hoping for “South West” or “East West.” However, sources have told multiple news outlets that Kim and Kanye plan on naming their son after Kanye’s family and his name will have no compass references. We have a sneaking suspicion there is going to be a “Kanye West II,” running around. As if  one Kanye West isn’t enough…

What do you think Kim and Kanye will name their baby boy? Share your predictions in the comments below!