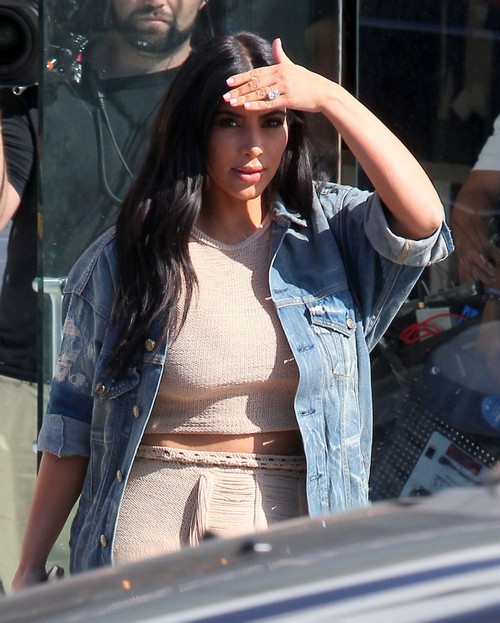 Kim Kardashian and Kanye West were on the verge of a divorce for months as the couple struggled with their infertility woes. When Kim announced on Keeping Up With The Kardashians in May that she was finally pregnant (with a son, as CDL has confirmed), everyone assumed that Kimye’s marriage would be back on track. But, Kim’s pregnancy seems to have the opposite effect, and the couple is fighting more now than ever because Kanye has abandoned his pregnant wife and hit the road to party with celebs and do performances without her.

The June 29 edition of Life & Style Magazine reveals that Kim Kardashian is fed up wither husband, and is sick of lying at home fighting morning sickness while he goes off jet-setting and living it up without her on tour. An insider dished to Life & Style, “Kim is so upset. She really needs him around to comfort her and has begged him to cancel at least some of the dates, but Kanye refuses. In fact, no one would be surprised if he winds up adding even more dates to the tour.”

Kanye West abandoned Kim Kardashian while she was pregnant with North West, and while they were trying to conceive baby number two, a son, Kanye promised her that it would be different this time around. Of course he promised her that, he wanted Kim to get pregnant more than she did! Obviously Kanye was going to say whatever Kim needed to hear so that he could get the son that he always wanted. L&S’s insider explained, “Kim made Kanye promise that she wouldn’t have to go through another pregnancy alone. But he didn’t keep his word, it’s sad.”

Kim Kardashian stirred up a lot of drama when she was pregnant with Kanye’s baby, and going to court to divorce Kris Humphries. How ironic would it be that while she was pregnant with Kanye’s second baby, she chose to divorce him! Do you think that Kim and Kanye’s marriage will be able to survive this tumultuous pregnancy? Or could they get divorced before baby number two is born? Let us know what you think in the comments below!