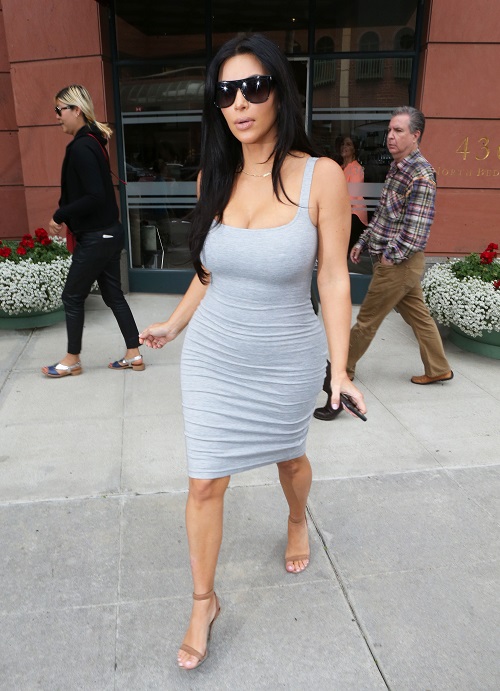 It looks like Kanye West and Kim Kardashian’s divorce is back on! Kim Kardashian might be pregnant and struggling with morning sickness, but she will surely find time to visit her squad of divorce lawyers that she has on stand-by. Kanye West was a doting husband for the past year – but now that Kim is finally pregnant with baby number two, the rapper can do as he pleases again. The first item on his to-do list? Party with his ex and Kim Kardashian’s nemesis, Amber Rose!

Kanye West left his pregnant wife at home and stepped out to party at Instagram model Maddy Morebucks 25th birthday party. Also in attendance, Amber Rose and Blac Chyna, another one of the Kardashianss enemies. Amber Rose and Kim Kardashian have never been pals, seeing as how Amber insists that Kanye cheated on her with Kim. But, in early 2015, the tensions between the Kardashian sisters and Amber Rose came to a boiling point when Amber dissed Kylie Jenner and called her a “little girl” and said that she needed to leave Tyga alone. Amber’s comments lead to a messy social media feud, which resulted in Khloe and Rob slamming Amber, and then Kanye saying in an interview that Kim wouldn’t even touch him until he “took 9 showers” because he had been with Amber.

Seeing as how Amber publicly dissed Kim, as well as her sisters, Khloe and Kylie, Kanye West shouldn’t be within a ten foot radius of his ex, let alone slumming it at Instagram parties with her. And the fact that Blac Chyna was there as well just adds insult to injury, seeing as how she has publicly threatened 17-year-old Kylie Jenner for stealing her baby-daddy, Tyga.

Kanye West isn’t dumb enough to openly hang out with Amber Rose in public, regardless of whether they are on good terms again. But the fact that he attended a party where she was in attendance – and didn’t diss her while he was there – is grounds for a divorce in Kim Kardashian’s books. It’s safe to say all hell is breaking loose at the Kardashian-West compound right now. Do you think Kim has a right to be upset? Or is she being petty? Let us know what you think in the comments below!