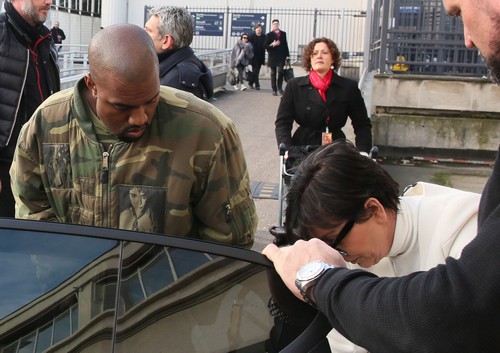 While Kanye West is distracted by Kris Jenner and North West in Paris (see photos) Kim Kardashian is moving stealthily ahead with divorce plans. Kim Kardashian and Kanye West are getting a divorce. There was never a doubt in our minds that Kimye was breaking up. The only question was when? Well, the time has finally come – after news broke a few weeks ago that Kim was meeting with high-profile divorce attorneys, we can officially say that the Keeping Up With The Kardashians star is filing her papers, and like every other major event in her life, she has sold the story to a tabloid for a pretty penny.

According to a new report from Media Takeout, the divorce is on – and Kris Jenner has brokered an amazing deal with one of the weekly gossip magazines, selling them exclusive rights to the story. MTO reveals, “We’re told that Kris Jenner worked out an exclusive with one of the gossip weeklies – who will officially break the news tomorrow. We’re told there was a bidding war for the story, and Kim and Kris will be paid more than $500 K for the story. As we speak, Kanye is in the UK enjoying time with his daughter and his mother-in-law Kris Jenner. All the while she negotiated a cover exclusive with a gossip weekly to break the news that Kim is filing for divorce.”

Nothing Kris Jenner or Kim Kardashian does shocks us anymore. Hanging out in Paris and keeping Kanye West busy and distracted while Kim Kardashian runs around California meeting with tabloids and filing divorce papers is actually exactly what we would expect from Kris Jenner – and nothing less. It’s no secret that Kanye is unpredictable and uncontrollable, so Kim and Kris had no choice but to file for divorce behind his back and catch him by surprise. We’re told there is actually a gag order that goes along with the divorce papers that are being filed, and Kim can take Kanye for every penny that he is worth if he begins slamming her and/or her family in interviews like he did to his ex Amber Rose last month.

Do you think it is disgusting that Kim Kardashian sold her divorce story for half a million dollars? Or would you expect nothing less from the KUWTK star? Do you think that Kanye will go crazy when he learns what his wife and mother-in-law have been up to? Let us know what you think in the comments below!

Kanye West arrives at the Gare du Nord train station in Paris, France with his daughter North and his mother-in-law Kris Jenner on March 4, 2015. The family is in town to take in Paris Fashion Week. FameFlynet