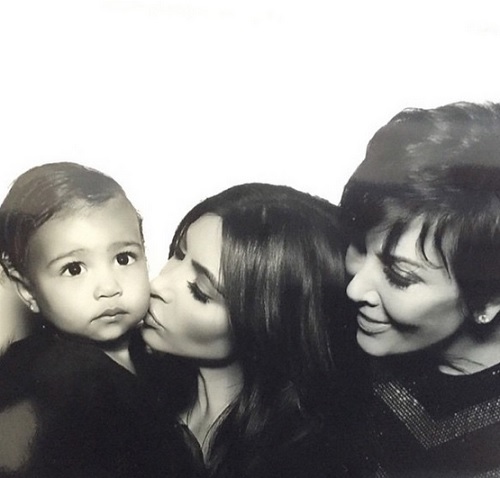 The source claims that Kim Kardashian is always in North’s face with her cell phone taking “selfies” of the baby, and Kanye does not want pictures of his daughter taken, because he fears that they will be leaked.

The source says, “It’s the biggest parenting argument they have and now it’s turned into a war. Kanye wants to keep North away from all screens — cell phones, tablets, and big TVs because he’s convinced electronics are bad for her.”

Kanye West has been very vocal about protecting his daughter and keeping North out of the spotlight for as long as we can remember. When it came to filming the popular E! reality series, Keeping Up with the Kardashian’s, Kanye opted not to appear in the majority of the episodes, and told Kim that he did not want the wedding, the birth of the daughter, or many shots of their daughter to be aired. For the most part, he has won that battle.

Kanye has always been a private person, and if you recall, he has been in a few incidents in which her actually broke the cameras of paparazzi because they would not leave him alone.

So what makes this argument different than any other regarding images of North West? This time, Kanye is convinced that the radiation from technology is bad for North’s physical health. The source says, “He even insist everyone leave their phones at the door when entering the nursery!”

Kim Kardashian is not buying this excuse. The source says that “Kim thinks it is total rubbish and has spent hours digging up links that prove it’s not true.” When Kim recently posted on Twitter about all of the selfies she takes of and with her daughter, Kanye was furious. “Kanye does not like it when Kim encourages North with selfies. He hit the roof when she boasted about it online. It totally undermines him.”

It sounds like there are some serious parenting issues that need to be worked out between these two before they lead to divorce. Kim Kardashian and Kanye West both think they are a gift to the world, so we are sure they both feel that they know what’s best for their daughter. If neither one of them wants to bend, we would be surprised if this marriage lasts much longer.

What do you think? Is Kanye West right to keep North West away from the cameras, or is it okay for Kim Kardashian to take pictures and cherish the moments she has with her daughter? Let us know in the comments below.