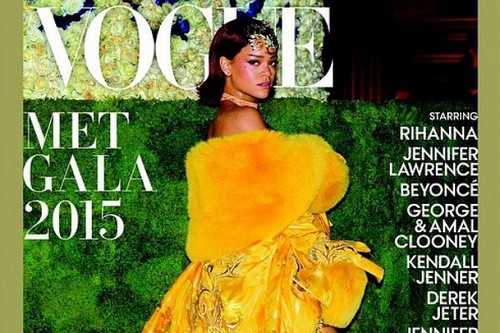 Kim Kardashian has been upstaged by her little sister Kendall Jenner once again – and snubbed by Anna Wintour and Vogue Magazine. The Vogue Magazine 2015 Met Gala Special Edition features Rihanna in her iconic yellow dress – and a list of honorable mentions, like Kendall Jenner. One name was noticeably missing from the list of celebrity names on the cover…Kim Kardashian.

Ironically, Kim Kardashian, Kanye West, and North West’s Vogue cover was released during this time last year – and Kim Kardashian bragged incessantly on her reality TV show, social media, and in interviews about what a huge deal it was to land the Vogue cover. We wonder if it is such a “huge deal” now that her little sister Kendall Jenner has also had her name on the magazine’s cover – and Kim’s name was left off the list of celebrities at the star-studded Gala.

Kim Kardashian raves about how proud she is of Kendall Jenner and her modeling career – but behind closed doors she is a jealous mess and starting to hate her sister big time. Kendall’s name being casually listed on a special edition of vogue Magazine instead of Kim’s is going to create some major friction at family dinners. Kendall is basically accomplishing everything her sister Kim is still trying to accomplish – and she is over a decade younger than her. The fact that Kendall Jenner doesn’t even have to take her clothes off to do so is just the icing on the cake.

If getting her name on the cover of the Vogue Met Gala edition was that important to Kim, she probably should have followed Anna Wintour’s clear rules and not posted any photographs or selfies from the event on social media. But, as always – Kim thought that she was above the rules, and she posted a photo of herself and Jennifer Lopez posing “butt to butt” on Twitter. It sounds like Anna Wintour and Vogue intentionally snubbed Kim Kardashian because she refused to adhere to their selfie ban.

How distraught is Kim Kardashian over being snubbed by Vogue – do you think she will get out of bed this week? How funny is it that Kendall Jenner is far exceeding her big sister, and she doesn’t have a sex tape nor does she pose nude? Let us know what you think in the comments below!