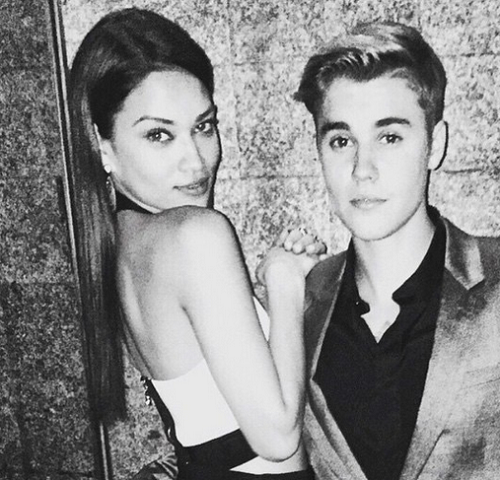 Justin Bieber is in love, and not with Selena Gomez or Kendall Jenner, but with Shanina Shaik. Biebs stepped out on May 2 with model Shanina Shaik, and the couple pre-gamed at Hard Rock Café in Las Vegas before the Mayweather and Pacquiao fight. Onlookers couldn’t help but notice Justin and Shanina’s PDA-fest, and the model later took to Instagram to think Justin for such a magical night – because apparently booze and boozing are the way to her heart. According to a new report, Shanina Shaik isn’t just Justin’s flavor of the week – she’s his new girlfriend and Kendall Jenner and Selena Gomez are not happy about it.

The May 18 edition of In Touch Magazine reveals that Justin’s night with Shanina wasn’t just a one-night thing, and he is really into her. An insider dished to the magazine, “Justin liked Kendall, but he is really into Shanina Shaik. Justin’s definitely hooked Shanina is his dream girl.” In Touch also goes on to explain that Kendall Jenner is devastated by Justin and Shanina’s hook-up and “Justin broke her heart.” Well, Kendall Jenner can join the club – is there a model left in Cali that hasn’t had their broken by Biebs?

As CDL has been reporting for weeks, Justin Bieber and Selena Gomez were talking to each other again and Selena wanted to get back together with her ex – but their reconciliation was sidelined when Justin showed up at the Met Gala with Kendall Jenner, the same girl he cheated on Selena with in 2014! Now, Kendall and Selena are both joining the lonely hearts club, and Justin has ditched them both so that he can hook up with his new “dream girl” Shanina Shaik.

Seriously, what do all of these girls see in Justin Bieber? According to our insiders, Kendall and Selena are both fed up with Biebs and his games – and they might even bury the hatchet and reconnect over their mutual hate for Justin. A source dished, “Kendall and Selena were good friends until Justin came between them. Kendall finally realizes what it feels like to be dumped by Justin and she feels horrible about hooking up with him at Coachella last year. She plans on reaching out to Selena to apologize and put their feud behind them.”

How awesome would it be if Kendall and Selena joined forces and took down Biebs, or at least made a complete fool of him? What do you think of Justin’s new girlfriend Shanina? Do you think that their relationship will last longer than a week? Let us know what you think in the comments below!