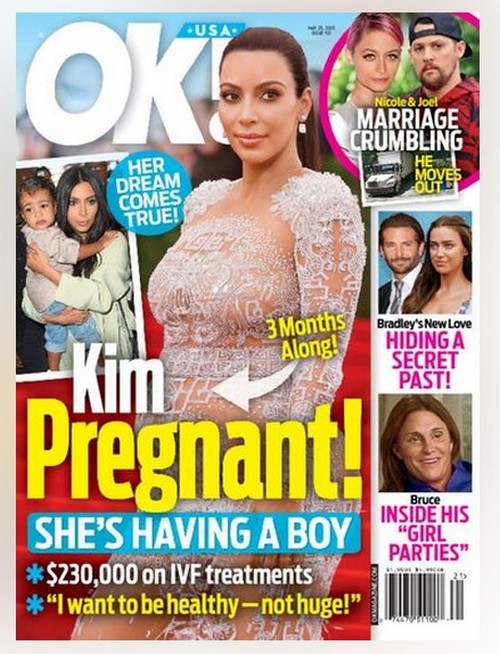 Kim Kardashian is pregnant with baby number two – and it’s a boy! Kim Kardashian has been very open about her struggles with infertility over the past year, and it is no secret that the Keeping Up With The Kardashians star was trying desperately to get pregnant again after having North West. She even recently confessed on the family’s reality TV show she and her husband Kanye West have been having sex over 10 times a day to try and conceive. According to an all new report, Kim and Kanye have finally succeeded and Kimye is having a baby boy.

The May 25 cover of OK! Magazine features Kim Kardashian with what appears to be a baby bump, the headline screams “Kim Pregnant – She’s Having A Boy.” According to OK!, Kim is reportedly already three months along, and “her dream has finally come true.” The magazine’s cover goes on to reveal that Kim and Kanye spent over $230,000 on IVF treatments before they were finally able to get pregnant. And, Kim plans on “being healthy” this pregnancy and “not huge.” Good luck with that Kim.

What the cover of OK! Magazine doesn’t explain is that this pregnancy will actually be very dangerous for the reality TV star – on KUWTK Kim visited a doctor and learned that when she was pregnant with North her placenta grew in to her uterus. So, not only will Kim be a high-risk pregnancy for the next nine months, but as soon as she gives birth to Kanye’s son she is going to be whisked away for emergency surgery and will have to have her uterus completely removed.

What do you think of Kim Kardashian and Kanye West having another baby? Is it crazy that they are risking Kim’s life to do so? Kim and Kanye’s marriage has been on the rocks for months – will the pregnancy be able to save their relationship? Let us know what you think in the comments below!